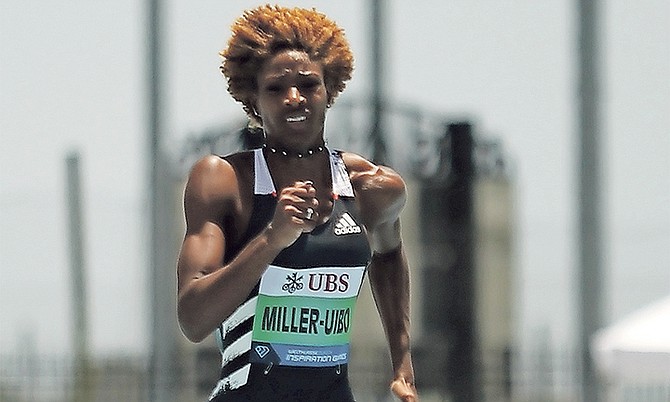 In her second straight meet, Bahamian Olympian 400 metre champion Shaunae Miller-Uibo was unable to complete the finals of her event, prompting her to put a lid on the coronavirus-laden track and field season on Saturday.

Three weeks after she withdrew from the final of the women’s 100m at the Star Athletic Sprint Showcase at the Montverde Academy in Montverde, Florida, Miller-Uibo returned to action, but pulled up in the 200m at the Drake Blue Oval Showcase at the Drake Stadium in Des Moines, Iowa. Miller-Uibo didn’t finish the last of two heats in the half-lap race.

In the race was fellow Bahamian and two-time World Championships finalist Tynia Gaither, who picked up a third place in 23.08 seconds for fourth place overall.

Lynna Irby, sponsored by Adidas just as Miller-Uibo and Gaither, had the fastest time in winning with 22.52 with Kyra Jefferson of Nike coming in second in 22.69. Shakima Wimbley, also of Adidas, won heat one in 23.07 for third place.

After withdrawing from the final of the 100m on August 10, Miller-Uibo’s manager Claude Bryan, the chief executive officer of On Track Management Inc., said it was “just a mild discomfort so she opted for caution.”

However, after Saturday’s race, Miller-Uibo said she “felt a little discomfort in my leg and decided to stop.” She nor Bryan gave any indication of what might have caused the discomfort.

Coming off her silver medal performance at the World Championships in Doha, Qatar last October behind Bahrain’s Salwa Eid Naser, Miller-Uibo stormed out of the resumption of the track and field season after the world-wide stoppage of sports in March because of the spread of the coronavirus.

Except for coming in second in a 150m virtual race behind American Allyson Felix and ahead of Mujinga Kambundji of Switzerland at the ‘Weltklasse Zurich Inspiration Games on July 9, Miller-Uibo has been unbeaten in all of her races in face-to-face competition on the track.

She has also produced the world-leading time of 21.98 in the 200m at the National Training Center in Clermont, Florida and previously had the best time of 10.98, now listed at No.4 in the 100m. “We’ve had a really great season and it just wasn’t worth taking the risk,” said Miller-Uibo about whether or not she intends to continue competing this year with the European circuit now in full swing.”

Miller-Uibo, like fellow Bahamian male compatriot Steven Gardiner, under the management of On Track Management Inc., has signalled the end of her season.

“This is my last competition of the season,” she stated. “So now it’s time to take a break and focus on being ready for next season.”

Miller-Uibo, the reigning Olympic champion from Rio de Janeiro, Brazil in 2016, has hinted that she will probably just concentrate on the 200m in Tokyo, Japan with the 2020 Olympics rescheduled for July 2021 because of the coronavirus.

She was hoping that the World Athletics and the International Olympic Committee would have granted her request to amend the schedule so she could pursue the 200/400m double, but that has been denied. So Miller-Uibo is more committed to contesting the shorter race.

If she does, Miller-Uibo could be providing a 1-2-3 punch in the half-lap race for the Bahamas with Gaither and Anthonique Strachan, who is training and competing in Kingston, Jamaica with Shelly-Ann Fraser-Pryce and Elaine Thompson-Herah.

At the American Track League Meet #7 at Life University in Marietta, Georgia, Gaither clocked 11.61 after running 11.59 in the heats for her victory in the 100m.

Two weeks prior at the Back to the Track Series III Meet at Prairie View A&M University in Prairie View, Texas, the 27-year-old Gaither, now training in Texas, took 60m in 7.46 and the 100m in 11.25, the latter of which is listed in the top 25 in the world.

Strachan, who celebrated her 27th birthday on August 22 cramping up in the 100m at a meet in Jamaica, came back Saturday at the Velocity Fest 7 Track Meet and placed second in the 200m in 23.87 behind Thompson-Herah (22.79) at the Sports Development Foundation National Stadium. (See full story below)