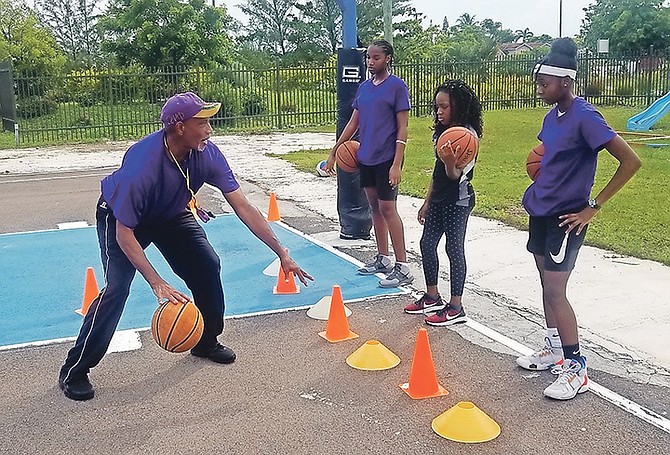 MARCIA Hall and Reyanah Green were the first two participants to attend the Diamond League Basketball Camp that got underway yesterday at the Hope Center Church.

Held in memory of the late Jonique ‘Mini’ Webb and coach Sherman Smith, the camp didn’t have the numbers that coach Terrance ‘Red Eye’ McSweeney had anticipated, but as the daily sessions run through August 15, he anticipates the participation to increase. Webb, a former versatile athlete whom McSweeney coached at basketball, is being honoured during the segment for girls from 9am to noon, while Smith, who McSweeney assisted with his programme at Carlton E Francis, is being honoured during the boys’ segment from 1-4pm.

McSweeney said in all things, the bible has taught him to “give God thanks and so I’m thankful for the two participants so far in the Diamond League Development Camp.

“I’m expecting the camp to be rather slow this week as all camps that I’ve had in the past were all slow on the first day and then on the second day, things start to pick up.”

He encouraged parents to take advantage of the safe environment to enrol their children in the camp that will run from Monday to Friday for the next five weeks.

“We anticipate that the numbers will definitely increase as the weeks go on,” he insisted.

Here on her summer break from Eleuthera where she attended the Harbour Island All-Aged School, Hall, the daughter of sportscaster Marcellus Hall, said she decided to attend the camp because she enjoys playing basketball.

“It’s actually fun for me and I got to learn a lot of new stuff,” said Hall, who admitted that she was interested in basketball through her mother, but her father has pushed her.

In attending the camp, the 10-year-old said she “hopes to get better at it” because he feels that the instructors will be able to “help me along if I do something wrong and if I am doing something wrong, they will help me to get it right.”

Green, a 12-year-old entering grade nine at St John’s College, said she decided to join the camp to improve her skills as a member of the Giants’ basketball team when they participated in the Bahamas Association of Independent Secondary Schools’ season when school reopens.

“I want to better my skills,” said Green, who hopes to one day become a professional basketball player. “So far, it (the camp) has been good. I am enjoying it.”

Jasmin Roker, one of the two instructors helping out McSweeney, said the camp is all about learning the game of basketball and having a fun time in the process. “This is just the first day, so it’s a bit slow,” said Roker, who will be entering the 12th grade at St John’s and will also be playing a pivotal role on the Giants’ basketball team.

“We want to encourage the others to come out. We are thankful that we only have two people today, but I’m hoping that they leave having learnt a lot.”

Raven Jones, the other instructor who is also a member of the Giants’ basketball team, who will be entering the 11th grade at St John’s, said the camp will be good for the participants.

“I’ve already seen some improvement in the two that came out so far,” she stated. “We just want to help them to get better and improve on their skills.”

During the first week, McSweeney said the campers will get the opportunity to work on their ball-handling skills on Monday, Wednesday and Friday and today and Thursday on shooting.

“The whole premise of the first four weeks of this five-week camp is to develop the child,” McSweeney pointed out. “If it is a first time or they want to work on their skills for GSSSA or BAISS and they want to do some summer training, we will provide that.

“Diamond Basketball Development is a very slow process. We take our time and we work with you. I encourage your daughter, in the morning sessions, to make as many mistakes that you want to make, but come the second and third weeks, I want you to limit those mistakes as much as possible.”

By the fifth and final week of the camp, McSweeney said they will concentrate on playing a lot of games with the participants before they end with an awards presentation session.

The camp, for girls between the ages of 8-16 years and 8-11 for boys, is designed to help keep the memories of Webb and Smith alive.

Webb passed away at the age of 30 on January 19 after a battle with lupus and 53-year-old Smith died on April 22, having been diagnosed earlier with sickle cell that led to complications with COVID-19.