ALICIA WALLACE: Will we ever learn to tolerate and celebrate every person no matter what their gender? 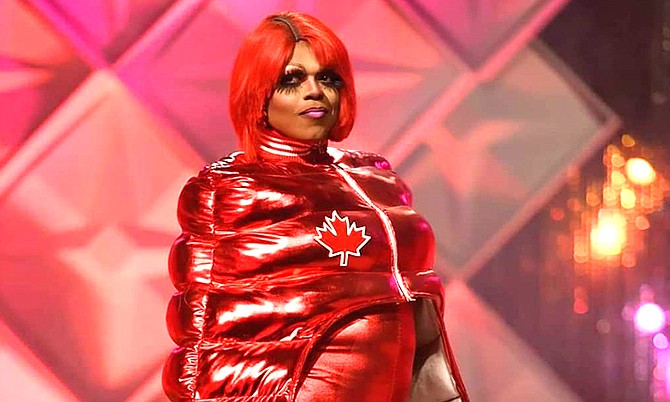 Bahamian drag performer Anastarzia “Starzy” Anaquway is on the popular television show Canada’s Drag Race. Starzy, who is 37 and now living in East York, Ontario, has won more than 15 pageants in 17 years of competition. The reigning Miss Black Continental said in the introduction video, “My greatest asset is the fact that I am a self-sufficient queen.” Starzy is confident, funny and ready to win. There isn’t much Bahamians like more than competition and a Bahamian we know can bring the prize home. One of the only things that can get between us and a fierce competitor is the narrow, warped and hateful version of Christianity professed and practised by too many.

In episode two of Canada’s Drag Race, the theme was “Not My First Time”. This prompted the sharing of memories among contestants and Starzy shared not only that homophobia exists in The Bahamas, but the story of being being shot, having to drive to the hospital and seeking asylum in Canada. Contestants rallied around her, showing support. The response from many Bahamians on social media, however, has not been supportive. People were not pleased to have dirty laundry aired for the world to see. Many, in fact, deny that LGBT+ people here experience targeted violence.

In a comment on Facebook, someone said: “If he come back home drag queening, he will be shot agin… the Bible say put them to death.” It is easy to find biblical support for hatred and oppression. It is important to remember The Bible was used to justify slavery and Christianity was a tool to indoctrinate and subjugate African people. In the Old Testament, numerous acts were to result in death, from adultery to blasphemy.

We do not spend as much time policing what people eat, how people spend the Sabbath, or make and worship idols as we do policing people’s gender identity, performance and expression. Even then, it is only the gender of certain people that concerns most among us. Tyler Perry, for example, has been allowed to create and portray a caricature of a Black woman for years, selling it to Christians as godly entertainment. He wears dresses, a wig, and make-up, wields a gun and turns Black womanhood into a joke, but with a few gospel songs thrown in, it is fine. People continue to buy tickets to watch his terrible movies, even if “How did Taraji get on the boat?!” is a running joke in response to a major inconsistency in his 2018 movie Acrimony. The rules are applied differently to different people.

When people can steal from LGBT+ culture, they love it. They want to talk about the gag (as a punchline or a moment that leaves them speechless), use the gay friend as a prop (a harmless man to dance on or the source of jokes for a night out), talk about throwing shade (an indirect insult), and integrate voguing into their go-to dance moves. They hate the people who created the culture they mimic and monetize. You do not have to look far to see the way LGBT+ people, particularly trans people, have influenced the performance of womanhood and what femininity is understood to mean. From Madonna to Beyonce, the influence of drag and voguing — created and dominated by gay men and transwomen — is evident. Their work and their creativity have value. How is it that their lives do not?

LGBT+ people in The Bahamas experience violence because of their gender and sexuality, especially when daring not to conceal them. Not only are members of the community targeted, but there is little recourse as police have been known to refuse to take reports. They participate in homophobia by suggesting LGBT+ people deserve to be threatened and violated. People act as though they are personally impacted by the way others perform gender. The gag is that we all perform gender as though we are in a show. The way we dress, walk, wear our hair, speak, dance, treat body hair, alter our bodies, choose fields of study and professions, serve customers, take selfies, date, travel, assert ourselves and contribute to our households are all connected to gender. We may not always be on stage, but we are almost always performing.

Some of us know it and some of us do it. Even when shown the mirror, many will refuse to see it and that is its own problem.

We learn what womanhood and manhood are supposed to look like and we find our own versions of it, usually within the confines of what society finds acceptable. Is long hair more feminine than short hair? Do curves make the woman? Are heels required? Do we have to give birth? Does masculinity require a full beard? Are men allowed to show a full range of emotions? Can a two-year-old boy play with a doll? Who is congratulated and who is shamed for carrying a condom? Gender is an identity, a presentation and a performance and we create and refine our own over time. Some of us step outside of the constraints that keep others comfortable — maybe with a little eyeliner or clothing with a more loose, comfortable fit — and doing that can put us in danger. Someone can decide that, based on the Bible, someone’s gender performance or play — including drag — makes them deserving of death. Even in the face of this, some decide to be true to themselves.

Starzy said: “I’m the strongest person I know[…] The things that I’ve been through in my life made me the strong person I am.” There are a lot of strong people in The Bahamas and many of them built that strength as a result of extreme circumstances. What if being strong was not a prerequisite for surviving here? What if we could retain the talent that is forced to flee? What if our creative industry was given the resources it needs to displace tourism as the top industry? What if the people who could help us make it happen could stay? What if we cared as much about the lives of other people as we do about the economy?

When will we be able to talk about people as though they matter and have value outside of what they can do for capitalism?

We were not happy about the closure of beaches on the Independence holiday weekend. Some deemed it the right decision, finding it necessary for us to be restricted to prevent failure to comply with social distancing rules. We had a nightime curfew with police stationed to keep people off the streets, far too many people trying to get into grocery stores and only a staff member or two to manage the crowd and a host of other happenings that call the decision to close the beaches into question.

The prime minister stressed he was “only” asking for three days. For many, those three days were — or one of those days was — among the only days they could access the beach. It is easy to forget the people whose ordinary life was working five or six days per week, having one day off to conduct banking, pay bills, grocery shop, clean the house and any other necessary tasks. Sundays are often reserved for church and cooking for the family. The beach only becomes an option for people on holidays. Everything is closed, it’s hot, and the beach is accessible by bus.

It was frustrating to see that tourists jumped a fence closing access to a beach while we suffered through compliance. They did it wilfully, know the beaches were closed and were unabashed in sharing that they felt entitled to beach access because they don’t have beaches where they live. It is clear many people do not regard this as a real place. We are not real people, our laws are not real and no consequence is real for them.

Perhaps the precedent was set when they were allowed to enter the country without having taken the correct COVID-19 test. It was said there is no way to know who they are or how to find them. That is not true. We know what they look like, where they came from and that they should be on the list of people allowed to enter with the wrong test. They have to go through our airport again to get home. Identify them and fine them. The Bahamas is a real place, Bahamian life has value, no one should have greater access to The Bahamas than we do, and it’s time to start acting like it.

Yep, that's just what we all need. Bring out the drag queens. LOL

Putting a Mercedes logo on a Ford truck does not transform the former into the latter. Society should not be forced to agree that it does in the name of 'tolerance.'

Some delusions must be resisted for the greater good!

Explain to me how people dressing and performing in a way that both brings them joy and a career is delusional? Everybody from priests and judges to clowns and sports players does this. It has no bearing on your life whatsoever, why are you so bigoted?

... you seem to confuse role playing (as actors do) with a person embracing a lifestyle because of deeply held beliefs which cannot be objectively supported, or did you not read the article? Do you not know what a transgender person believes? An anorexic takes the course of action they do, not because they are simply role playing, but because they hold beliefs that are not grounded in reality. That is the definition of a delusion. The attempt to throw around the word 'bigoted' to negatively label another is rooted in not having a logical response to an argument and an attempt to shame and shut down further dialogue. Notice I am not intimidated!

I genuinely do not much care how others live their lives, so long as they leave me alone. But please don’t ask me to “celebrate” whoever that is in that photo. I doubt that he/she has been celebrating me, so why should I return the favour?

All these comments sound so defensive, maybe this article brings up feelings for all of you that you're trying to suppress?

Yes, you’re right — for decades I’ve been suppressing the the urge to slip into a red satin gown, don a bright-red fright wig, glue on some eyelashes and prance across the stage. Yes, of course I have. You really nailed it there. Uh-huh. Boy, am I guilty as charged ... 😎

... and I thought the reference was to trying to suppress the urge to heave, because I failed and heaved twice!

Me thinks thou doth protest too much