Stateside: Maybe, Just Maybe, Trump Wants To Walk Away From It 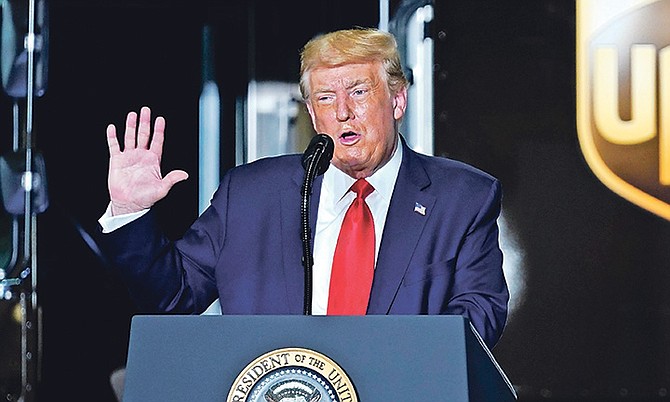 A growing chorus of observers in the US feels that President Donald Trump is actually trying to lose the upcoming November election. Why else would he behave so counter to his best re-election prospects? Why else would he do things like issue a pardon to convicted felon Roger Stone? Or set up a dangerous rally in Tulsa on Juneteenth or a GOP convention headline event in Jacksonville on the anniversary of the Ax Handle murder? Or have his staff actively try to discredit Dr Anthony Fauci, his chief epidemiologist, who is far more trusted than the president himself?

Maybe he can’t help himself. That seems to be at least part of the analysis of this complicated character by his niece, clinical psychologist Dr Mary Trump. In her best-selling new book, Too Much and Never Enough, she reportedly talks of Trump’s father as an emotionless sociopath who left severe scars on the psyche of his future President son. The book argues the residue of a fraught childhood leads to Trump’s erratic behaviour.

But while the President’s re-election chances continue to circle ever closer to the drain still four months from the election, his opponent seems to be rising inexorably in the polls without doing very much to earn his growing advantage.

Joe Biden regularly condemns Trump’s greatest outrages, delivers a speech or two here and there and issues some position papers. But he remains mostly out of sight.

An exception occurred earlier this week. Biden spoke with selected reporters for a while in a conversation that was pretty widely reported. In the discussion, the Democratic candidate seemed to believe his election might offer a historic opportunity for transformative change in the US.

Biden said: “I do think we’ve reached a point, a real inflection in American history. And I don’t believe it’s unlike what Franklin Roosevelt was met with (when he took office in 1933 during the Great Depression). I think we have an opportunity to make some really systemic changes.”

According to press reports, Biden sees the potential to recast American policy in areas such as the environment, race, health care and federal tax policy. These areas, in addition to introducing legislation that would fund the badly needed, massive upgrades in infrastructure all across the country, would be the areas he would potentially focus on. Of course, all this depends on him winning and his party regaining control of the US Senate. While things look fairly good at the moment for the Democrats in several tightly contested races, that could change. A gain of three seats for the Dems would allow Biden’s vice president to break ties. Who will be that vice president? When Biden has been in the news lately, it has often been due to speculation about his choice of a running mate. He pledged months ago to name a woman as his VP choice. Biden would make known his choice early in August. The Democratic convention begins, mostly virtually, August 17. There has been no lack of public commentary on this issue.

Biden has said from the beginning he is looking for someone who shares his overall approach to governing and who would be prepared for the presidency from the beginning of his administration. He has also said he would prefer a running mate with strengths that complement his own. It’s becoming quite a parlour game to figure out what this means for the women who are supposed to be the leading candidates.

Since George Floyd was killed by police in Minneapolis at the end of May, the Black Lives Matter movement has inspired massive protests and garner daily headlines. This has led to speculation that Biden should, or even may be compelled to, name a black female running mate.

The Floyd killing also was the death knell for the otherwise flourishing vice-presidential candidacy of Minnesota’s senior senator Amy Klobuchar, who earlier in her career had served as prosecutor for Hennepin County, which includes Minneapolis. She had a reputation as being tough on black crime. City and county cops and prosecutors have quietly been feared in the Twin Cities for many years, andsome of that stink stuck to Klobuchar, particularly after city policemen killed Floyd.

There has been some public pressure on Biden to choose a black woman as his running mate. Listen to Rep. James Clyburn, the South Carolina congressman whose support clinched Biden’s campaign-changing primary election victory February 29:

“I and several others have expressed our feeling that it would be great for him to select a black woman,” Clyburn said in May. “But that is not a must. That is just what I think would be a great thing to do.  (Biden) must be guided by his head and his heart.”

And Al Sharpton, who’s on TV almost as much as Trump these days and who has replaced Jesse Jackson as the minister who is most in demand at funerals and public events of symbolic significance in the continuing American civil rights movement, said this:

“I told Biden I would prefer a black woman but that I’m not making an ultimatum. I think he’ll make the right judgement.”

These African American leaders are careful with their words. But reading them, you do get the feeling if Biden picks a white (or non-black) running mate, he might have some explaining to do.

Nonetheless, public opinion polls for months have registered voters’ views on whether Biden needs to select a black woman as vice-president. By three-to-one margins, voters overall have said it doesn’t matter to them. Many black voters, and especially black women, have said the key to this election is ridding the country of Trump. Who occupies second place on the Democratic ticket is less important to this key constituency.

Biden’s decision on choosing a white or non-white running mate is in some ways comparable with his decision on selecting a liberal firebrand like Elizabeth Warren or someone more moderate and middle of the road. It will be a largely political calculation tinged with personal compatibility.

And if history holds true, who his eventual running mate is will make less difference in the outcome of the election than the headlines between now and mid-August will make it seem.

White House walks away from a real clunker

The Trump administration, which has not made a habit of it, backed down quietly on Tuesday from a boneheaded decision. That decision would have negatively impacted a lot of Bahamian and other international students in the US.

On July 6, Trump’s Immigration and Customs Enforcement office had issued a rule that would have required international students to transfer to a school holding in-person classes. Otherwise, they would face deportation from the US because their schools held classes entirely online because of the pandemic.

Since many American colleges and universities are being appropriately cautious in reopening their campuses for the fall semester with COVID-19 cases spiking in many states including Florida, tens of thousands of foreign students at US universities would have needed to leave the US almost immediately. Lives and lifetime plans would have been turned upside down overnight.

Harvard and MIT led the way in filing suit against Trump’s order, but they were quickly followed by many other schools. A group of 20 schools in the American West, including Stanford, USC and Cal Tech, filed their own suit. 20 state attorney generals had also lodged challenges to the ICE decree.

It wasn’t the first one. It won’t be the last.

You give trump too much credit. He's so dumb he actually believes he's winning. He actually thinks his base (the dumbest people on the planet) are the majority.