DIANE PHILLIPS: Welcome back, Tellis - now you have the toughest job of your life 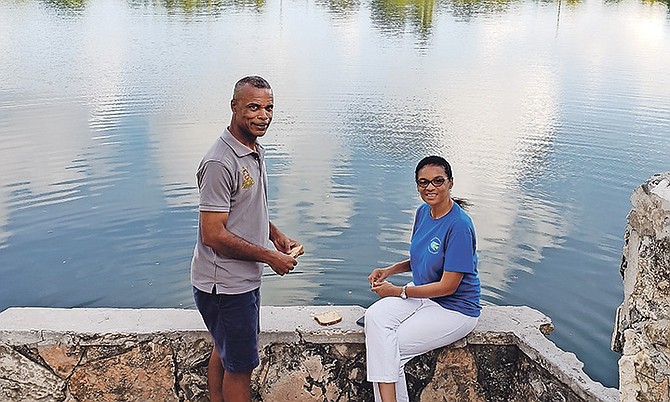 Tellis Bethel with his wife, Teri.

Standards Inspector of Security Forces. It’s an impressive title and to the best of my knowledge had not been bestowed on anyone before July 1 when it was handed with all the layers it entails to the former Commander of the Royal Bahamas Defence Force, Tellis A Bethel.

Bethel is now responsible for ensuring the government’s policies and mandates are carried out by every agency charged with enforcing the laws of the Commonwealth of The Bahamas. That’s Police, Defence Force, Department of Corrections, and in some cases, Bahamas Customs and Immigration – more than 6,000 men and women, strong, self-possessed and probably not a shy bone among them.

It’s a helluva task and if anyone can do it, Tellis Bethel can, but he will need strong support at every level, from the ministries and from the agencies. His years of diplomacy as Deputy Commander, then Commander of the Defence Force, along with interagency and multilateral coordination with officers from US and regional agencies in operations ranging from drug and human smuggling interdiction to hurricane disaster relief will be critical tools. If I had to guess, I would say that is part of what the Minister of National Security was referring to when he said Bethel’s skill set would serve him well in the new post.

Tellis Bethel with Minister of National Security Marvin Dames at the Military Ball at The Hilton.

But it’s a strange mixture, this new post, becoming part of an executive team yet, because of constitutional boundaries, unable to make final executive calls. As Inspector of Security Forces he has independent authority to assess and recommend yet his recommendations go straight to the Minister which, by its very nature, is a political post.

In layman’s terms, Bethel will be CAAO (Chief administrative assessment officer), CCEO (Chief compliance and efficiency officer), but not CBSHO (Chief buck stops here officer). That job falls to the Minister. Some will see Bethel’s post, correctly or not, as chief in charge of defence and law enforcement standards and that is one tough hat to wear.

So it’s about time that people got to know exactly the stuff Tellis Bethel is made of. In a few words, it’s rock-solid strength, integrity and an unshakable faith. This is the man who participated in and later directed the arrests of Columbian, US, Caribbean and Bahamian drug smugglers with thousands of pounds of narcotics and the confiscation of weapons and ammunition during the peak drug years of the 1980s when doing so meant pitting your life against those who had nothing to lose. The is the man who worked to helped apprehend or direct arrests of thousands of undocumented migrants and numerous poachers, gaining praise from Bahamian fishermen for his unprecedented-in-scale actions.

This is the same Tellis Bethel who was Operations Coordination Officer during Operation Blue Lightning in 1985, a joint US-Bahamas operation that netted cocaine and marijuana with a street value of more than $100m, one of the largest seizures in the world.

He’s also the man who, in his second stint with the RBDF after resigning and taking a five-year break from 1991-1996 to explore the business world in light manufacturing, was graduated to acting and then commodore with oversight of RBDF disaster relief operations through Hurricanes Joaquin, Matthew, Irma, Maria (in Dominica) and Dorian.

Ask him and he’d probably say he was most proud of accelerating the burgeoning Sandy Bottom Project, vastly expanding the ability of the Defence Force to protect 2,200 miles of coastline across 100,000 miles of open ocean by staging vessels and resources in Ragged Island and Inagua rather than dispatching ships and responding to suspicious activity from a single base at Coral Harbour.

He might also confess a bit of pride in overseeing the rescue of more than 540 people.

All of that information is available in public records as is the truth about the Byron Ferguson downed aircraft investigation, including the senior police officer’s mistaken report that the Defence Force called off the search shortly after 11 that night.

Tellis is a friend, and I consider that an honour. In fact, he and his wife, Teri, are among the handful of people my family and I hold closest to our hearts. We see the human side of an extraordinary man, author, historian, leader. I wonder what I could tell you about him that would help to paint the full picture.

I could tell you about his ear-to-ear grin as we made our way up a rocky, pitted road to see the famed Lighthouse Point in Eleuthera, Tellis jumping out of the car every few minutes to pick up heavy rocks with the lightness and surefootedness of an athlete to fill holes so my husband could continue maneuvering the small vehicle. I could tell you about his boyhood-like fascination with the sight and history of the lighthouse when we finally climbed to the top. I could tell you about his love for Teri, his pride in their two sons, or the evenings when plans had to be cancelled because of a Defence Force activity or the times we spoke with his wife after he directed an operation that kept him awake from one day to the next. Teri says in the years he was Commodore, he rarely slept more than a few hours a night, never off duty, but never once complaining.

I could tell you about his modest upbringing and his remarkable academic achievements. With Long Island and Eleuthera family roots, Bethel grew up in Grant’s Town, graduated from St John’s. His first job was equivalent of bellman aboard one of the earliest cruise ships, the S/S Emerald Seas and he was proud to wear that bellmen’s cap and be on the sea. He also worked for Navios Maritime Holdings. He joined the Defence Force in 1981 and served nearly 25 years with that break in between. At Britannia Royal Naval College, Devon, England, he received the College’s Best International Midshipman Award. He holds a Master of Arts degree in Leading, Innovation and Change (MALIC) from York St John University in York, England, which required residency in Switzerland.

Bethel also graduated with distinction from the United States Naval War College’s Naval Staff College in Rhode Island. He is a Fellow of the Center for Hemispheric Defense Studies at the University of National Defense in Washington and a Fellow of the Asia-Pacific Center for Security Studies in Hawaii. He has participated in numerous civil defense management courses at institutions in the United States, United Kingdom, China, Australia and the Caribbean.

As a friend, and as a loyal friend to The Bahamas, do well, Tellis Bethel. Now, we just have to get on with naming the most beautiful waters in the world The Lucayan Sea as you proposed.

His Majesty King Dames for he has appointed himself King of something. God alone knows of What. Will do well to stop creating Positions and jobs. because very soon there will be no money in The Treasury to pay salaries.

God and God alone knows how long this situation will last. ,Perhaps when doc and trump are no longer Leaders. God will turn his face towards the world, once again, .

That position was created so Cmdr. Bethell could leave the RBDF and serve until he retire to get his full pension.

The position goes against both the Police and Defence Act according to a lawyer.Politicians can get away with anything in the Bahamas. The media here in the Bahamas don't understand much and can't explain much.