Mike Sands Has Made Considerable Strides With Nacac Confederation 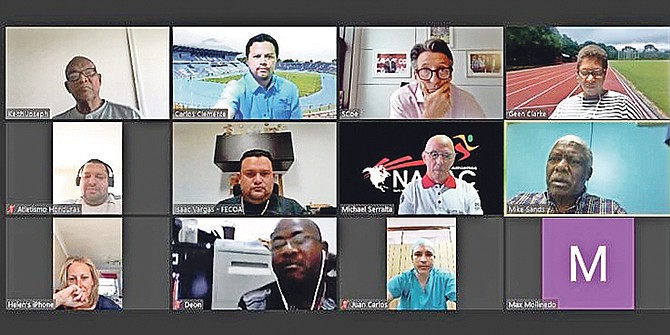 SINCE coming into office last year, president Mike Sands has made considerable strides with members of the North American, Central American and Caribbean (NACAC) Confederation.

While their actual meetings have been hampered this year by the coronavirus, Sands was able to hold a series of virtual meetings that have proven to be beneficial to all members.

Over the weekend, the latest meeting took place via Zoom with World Athletics President Lord Sebastian Coe accepting the invitation to meet with the presidents of CADICA or the Central America countries.

“It’s part of our plan to be all inclusive and so we wanted to meet with CADICA, who indicated during the election campaign that there are about seven of them who didn’t feel like they are a part of the NACAC membership,” Sands said.

“I have given them my commitment that going forward, we will look at their sub division and to hear their concerns and to see how best we can address them.

“We know we can’t solve all of their problems, but at least we will know what they are and try to address them as best as we can,” he said.

One of the main concerns coming out of the meeting was how NACAC can assist CADICA in developing their schedule of events where it will be equatable to all of their members.

“On average, if you took Nicaragua for example, a lot of events are held in El Salvador and people in Nicaragua would have to drive for about 16 hours to get into the competition and turn around and go back,” Sands said.

“So these are some of the things that we can’t solve overnight because those are logistical problems, but certainly we can find ways to help them lessen the back and forth to help their athletes.”

Technical training for the membership of CADICA was also discussed as NACAC listened to the six member presidents as they voiced their concerns.

Sands, whose administration has gotten the approval of World Athletics as he sits on the board as the area representative, said the CADICA members were also delighted to hear directly from Coe, who expressed his gratitude for the invitation and once again pledged his commitment to NACAC.

Since taking over from Victor Lopez as president, Sands was able to relocate NACAC’s office from Puerto Rico and it is now based at the Thomas A Robinson National Stadium.

Coe, along with a host of other dignitaries, were on hand for the official opening in January.

NACAC was also in the process of staging a track and field meet for athletes in the region here at the stadium, but those plans had to be shelved because of the coronavirus.

Sands indicated that they are still working out the details and whether or not it would be feasible for NACAC to still stage the event in the coronavirus environment.

Sands said they also hosted their first ever NACAC Gender Leadership Workshop over the weekend with more than 80 attendees from throughout the NACAC family, including Olympic and world champion sprinter Shelly-Ann Fraser-Pryce, who sat through the entire six-hour programme.

“There’s a lot of stuff going on behind the scenes. It’s just that COVID-19 has slowed us down,” Sands said.

“We’re trying to focus on as much as we can without physically meeting. That’s the upside of this pandemic. We still can meet over Zoom.”

Sands congratulated the tech team at the National Stadium for assisting NACAC in pulling off the meeting that was hosted by vice president Catherine Jordan from Barbados, Bermuda’s president Donna Raynor and Secretary General Cydonie Mothersill from the Cayman Islands.

The tech team was led by Dwayne Davis Jr.

Two Bahamians, Simone Robinson, the daughter of the late Tommy Robinson and Ms Salvador, served as the the local interpreters during the sessions, which also featured a number of workshops.