D'Aguilar: Locals Are To Blame 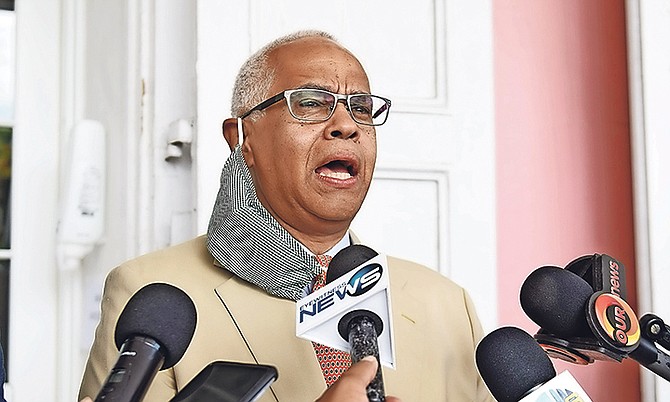 TOURISM Minister Dionisio D’Aguilar yesterday hit out at critics who knocked the government for its decision to re-open the country’s borders in early July, insisting the rise of COVID-19 cases in the country was not “tourist-related” but “domestic grown”.

The minister was responding to criticism from the opposition party which lamented that the government had not re-opened the country’s borders in a responsible way.

In a statement released yesterday, PLP leader Phillip “Brave” Davis said: “Guided by the medical and public health experts on our PLP task force, we repeatedly talked about the need to re-open wisely and the importance of expanding our nation’s capacity for testing and contact tracing.

“If the country was free of COVID-19 at the time of re-opening, as the prime minister declared, then any new cases were imported. The focus therefore has to be at the borders and yet the prime minister continues to focus on criticising Bahamians.”

However, speaking to reporters at Government House Mr D’Aguilar defended the move against critics who said the borders were opened too prematurely. He said the surge of cases was not a result of tourists entering the country, but rather due to Bahamians travelling abroad.

In view of this, Mr D’Aguilar suggested the government was perhaps not strict enough with its travel protocols for residents leaving and entering the country.

He said: “I completely disagree with them. It was not a tourist-related matter. Unfortunately, citizenry took advantage of their increased ability to travel and you will see that all of the cases are really domestic grown, and the foreign visitors have seemingly to date, not impacted us.

“Unfortunately, you could not create two separate economies and you couldn’t create two separate set of rules so of course the rules must apply to all and in our attempt to get a citizenry or the number of cases in Grand Bahama back under control, the prime minister felt compelled to do what he had to do.”

He continued: “But I don’t think anyone has shown me any evidence at least that it was because of foreign visitors coming into the country that we had a growth in cases, so I think we had that group of protocols working well. It’s just that maybe with hindsight we were not strict enough on Bahamians going in and out of the country.

“We have to rethink our strategy as it relates to visitors, but also to our own citizenry moving in and out of the country.”

In March, the government closed the country’s borders to all incoming commercial travel, including Bahamians, to curb the spread of the novel coronavirus. At the time, some relief flights were allowed to accommodate Bahamians and residents stuck abroad.

However, since then, The Bahamas has seen a spike in COVID-19 cases, particularly in Grand Bahama.

In an effort to contain the spread of COVID-19, Prime Minister Dr Hubert Minnis on Sunday banned all commercial flights and vessels from entering the country beginning on Wednesday. However, he said commercial travel from Canada, the United Kingdom and the European Union will be permitted.

The move has since attracted international attention, with many focusing on the ban of commercial travel from US countries.

However, Mr D’Aguilar said he wanted to dispel the myth that American visitors are not allowed to enter the country.

“The Bahamas is open to the United States, you just cannot come here by commercial aircraft and you can come here by private aircraft or by pleasure boat and so that was incorrect and we’re going to correct that,” he said.

Asked yesterday if he expects to receive any “pushback” from the US due to the restrictions, the minster replied that he didn’t expect to receive any negative feedback.

“So, I don’t anticipate any push back from the United States,” he told reporters. “I think they see what we did and why we did it and once the numbers from Grand Bahama settle, they will understand why we did what we did.

“And the European market and the Canadian market, first of all, we have no flights coming in from Europe and the Canadian market is really one flight a week so we need to fix our interaction with the United States both by our people going and out of the States and the protocols that they will now have to undergo when they return and obviously the ones we were using with the foreign visitors.

“And the evidence I have right now in front of me, I have no known cases created by foreign visitors coming into the country. They were all following the protocols, getting the COVID tests. We were screening them before they came so I think that was working well.”

D'Aguilar's efforts on behalf of Minnis to spin this latest surge of the Communist China Virus as being due to unruly Bahamians behaving like children is really quite laughable.

But we all know we were doing just fine in keeping this deadly pathogen at bay until Minnis and D'Aguilar foolishly decided to re-open our borders to travellers from the US in the midst of a major surge of the Communist China Virus in many US states, especially Florida.

The only local to blame is the local village idiot, Hubert Minnis!!!

This whiny weasel D'Aguilar is both shamefully and shamelessly trying to side-step the fact that it was him and Minnis who foolishly decided to pre-maturely re-open our borders to travellers from the US at a time when many states in the US, including Florida, were (and still are) ablaze with out-of-control community spread of the deadly Covid-19 virus.

Therefore it is D'Aguilar and Minnis who must bear responsibility for the return of Covid-19 spread to the Bahamas as a direct consequences of their foolish decision. For D'Aguilar and Minnis to suggest Bahamians are to blame is nothing short of ludicrous. No Bahamian was able to travel to the US until dumb D'Aguilar and dumber Minnis made it possible for them to do so. They even made it possible for Bahamians going to the US for less than 72 hours to return without a negative Covid-19 test in hand. Talk about outright stupidity!

Signed the Minister responsible for Casinos which creates one rule for foreigners and another for residents.

He didn't create it, he just pick up casinos that were always there. Different issue.

Maybe he meant something else but If the context of his point is that we should have had it stricter for Bahamians but we couldn't because we have to have the same rules for all then its relevant.

In the 1,168 days, he has had the portfolio over gaming he could have said something like Section 50 of the Lotteries and Gaming Act (?) needs to be ammended because the same set of rules to should apply to all.

You reaching buddy. Pick another line of reasoning.

No. That stupid rule allowing anyone who went to the US for less than 72 hours with no test is the problem. Opening our borders to the planet's largest surge is the problem....

I used to think this man was intelligent. Damn I was sooooo wrong....

He makes the dumbest public statements. From day one when he said he couldn't market Freeport because we have no hotels so if they can't sell the hotels he'll market Freeport as a sports tourism destination. The man just says incredibly dumb things constantly...

D'Aguilar is right. Bahamians are responsible for the government making the decision to allow Bahamians to travel into a COVID-19 hotspot and return home! Never mind the fact that Bahamians were undisciplined and mixing up WITHOUT any new cases developing.

May the folks in Killarney not repeat the mistake of voting for the dimwit that is leader of this country or D'Aguilar!

He is absolutely right. The spread in cases is almost solely related to Bahamians traveling to the US and returning within 72 hours, not requiring a test. Then came the community spread as they went to bars and large gatherings while not following safety protocols. This has NOTHING to do with US tourists coming into the country! All those cases with a history of travel spread it to the other positive cases with no history of travel. Anyone telling you differently is telling you dead wrong.

And who are the dimwits that opened our borders thus allowing our D- educated citizens to travel? That's right none other than he and that slug of a "leader" called Minnis!

The fact that you are allowed to do something doesn't mean you have to do it immediately. Common sense should play a big role. Unfortunately common nonsense usually has the upper hand.

So true. Common sense should have told our people to stay out fo Florida. Amazing we don't want to be lockdown and have freedoms restricted, but when we allowed to travel we blame the government for causing the outbreak. Just amazing.

Both you and My2Cents know full well most Bahamians are rightfully blaming the one person who enabled Covid-19 to return to our shores as a consequence of his very foolish decision to pre-maturely re-open our borders to travellers from the US, even without a negative test requirement for very short trips. And that dumb arse person is Minnis!

And that is what immature people do, blame others for their stupid decisions rather than take responsibility.

And that's exactly what immature and irresponsible Minnis is doing. He's trying to blame Bahamians for the horrific consequences of his very own foolish orders.

Cognitive dissonance, maybe daddy issues... they say minnis and daguilar dumb for allowing us to travel. Yet, we bear no responsibility for going to baeleria and bahamasair, buying the ticket, packing our bags, getting a good night rest before we travel and then making our way down to the port of departure, lets not forget as their is no pre clearance at the moment you knew u would have to stand in some border control area with a bunch of ppl on arrival, and that did not deter you. But, i agree that never should have allowed bahamians to return without a test just because they were not there for more than 72 hours. Then go back to work, to jam up in the pool by pelican bay, to attend funerals. Hey, like the opposition says this govt has no reason to deny us our civil liberties. So we'll eat and drink for the next two weeks then demand hypertension meds and be back to our usually selves.

How is banning or stop all commercial fights and vessels from entering the country help jump-start the tourism industry? People need their jobs. People have bills and family to provide for. Let's think about has well.

How is that only commercial travels from Canada, The United Kingdom and European Union, private planes and private vessels get free pass? Every country throughout the world is dealing with the COVID-19 crisis.

Stop & Think! Until there is a COVID-19 Vaccine and treatment nobody is really safe from this disease. Right now the logical think we can do "Educate people on how to keep themselves safe from COVID19 disease"

Wear your Mask to help prevent the spread. The US is not the only country that has high impact. The stock market in the US is going up, due to number of testing being done and upcoming vaccine.

How many voluntary free testing center for COVID-19 being done in the Bahamas?

Dream on if you think for a moment that it can be business as usual for our tourist dependent economy alongside out-of-control community spread of the deadly Communist China Virus.