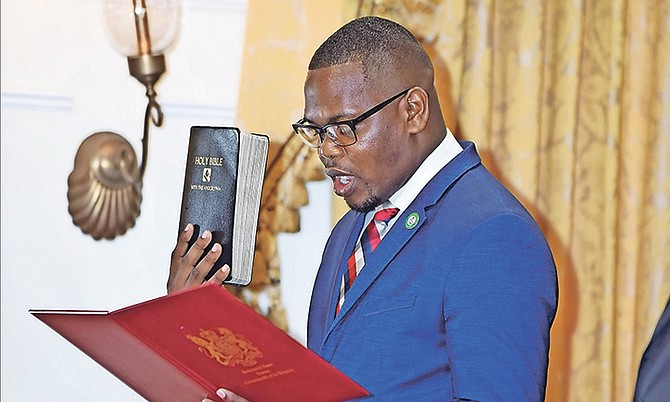 FOLLOWING a brief swearing in ceremony at Government House, Parliamentary Secretary in the Ministry of Tourism and Aviation Travis Robinson pledged to bring “fresh and innovative ideas” to aid the country’s tourism recovery amid the COVID-19 pandemic.

Mr Robinson’s re-appointment to the role comes two years after he was fired from the post for voting against the government’s VAT increase.

On Sunday, Dr Minis announced Mr Robinson will be reinstated as the parliamentary secretary in the Ministry of Tourism and Aviation.

During a scaled-down ceremony yesterday, government officials, family and friends watched as the Bains and Grants Town MP gave an oath of allegiance and accepted his instruments of appointment, which was administered by Governor General Cornelius Smith.

Speaker to reporters on the sidelines yesterday, Mr Robinson said: “Well, as you know I was there when I was first appointed in 2017. One of the things I was pleased by was to put new ideas to the forefront. The minister brings a wealth of experience in his background in the business arena and being able to present new, fresh and innovative ideas is what I’ve been able to bring to the board.”

Speaking to reporters yesterday, Mr Foulkes expressed confidence in his ability to handle both ministries under his portfolio, saying he does not “foresee” any issues given his experience as labour minister.

He said: “Well, one of the advantages that I have is part of the Ministry of Transport, I had carriage in my portfolio previously and it was called the Ministry of Labour and Maritime Affairs so the Post Office, the Port Department and the Bahamas Maritime Authority, I’m very familiar with those areas.

“So the Ministry of Transport is not totally new to me. The Met Department, the Road Traffic Department will be new areas but given my experience in the Ministry of Labour, I don’t foresee an issue with handling both ministries.”

His new appointment comes at a time when thousands of Bahamian workers have been laid off due to financial strain brought on the by the COVID-19 pandemic.

Mr Foulkes said officials are in discussions with various employers, encouraging them to keep as many workers employed as possible.

“We are talking to employers throughout the country to encourage them to maintain the highest level of employment as possible,” he said. “I am very pleased as the minister of labour that the government had decided to extend the unemployment benefit by 13 weeks. Both the assistance rendered by the Ministry of Finance to persons like straw vendors and hair braiders, tour operations and taxi-cab drivers to extend that and also the unemployment benefit - I think that has given a lot of relief to a lot of Bahamian families but the fact of the matter is until a vaccine is discovered or until there is a serious decrease in the incidents of persons that contract the virus, our economy will not fully recover.”

Foulkes talking to employers about maintaining when most in the private sector are talking downsize or exit! Amazing how out of touch they are. Anyone here expect to ever see a pension from NIB at the rate they're giving it away?

“Fresh and innovative ideas” my behind. Another well-spoken empty-suit politician. Brought nothing to the table from Election Day. The clowns that make up the governing majority is laughable at best.