Wells: I’Ll Be In Charge Of ‘Progressive’ Department - Wells 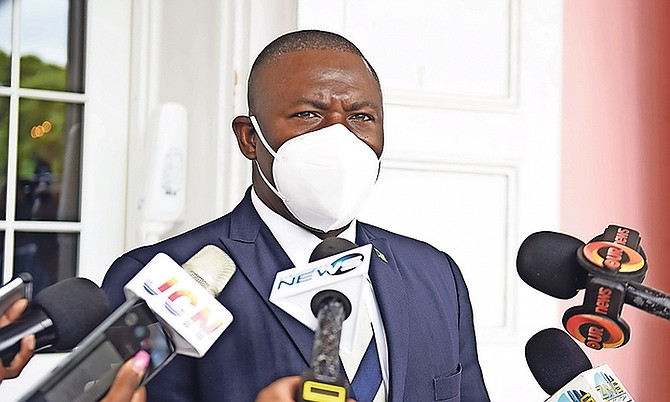 HEALTH Minister Renward Wells yesterday defended his new ministerial appointment, saying it’s not unusual for countries to have government representatives assume the role of Health Minister without having medical experience.

His comments to reporters came after he received his letters of appointment to the ministry by Governor General Cornelius A Smith yesterday.

During a national address on Sunday, Prime Minister Dr Hubert Minnis announced Mr Wells’ appointment as the country’s newest Minister of Health. As a result of the move, Dr Minnis said the Ministry of Transport will now fall under the portfolio of Labour Minister Dion Foulkes.

Since the announcement, many have criticised the appointment, with some observers questioning the wisdom of the decision given Mr Wells’ non-medical background.

Responding to critics, the Bamboo Town MP said: “There’s a lot of countries around the globe at this point of time, who have ministers of health who are not doctors and some of them have been doing quite well with the pandemic.

“We have Singapore that has an electrical engineer as the Minister of Health. I happen to be a mechanical engineer and the response of Singapore in regards to how it’s handled the COVID-19 pandemic has been excellent.”

He added: “I do believe that perhaps the Minister of Health in Taiwan may be a dentist and Canada, I believe, may not have a Minister of Health who’s a doctor and New Zealand and a couple other countries that’s escaping me at this point in time.

“But, what is necessary as the prime minister has spoken as to what he’d like to see me do in the confines of the Ministry of Health, he’s tasked me to be able to ensure that we move that ministry forward in a very progressive way and I intend to do just that.”

The Minister of Health in Taiwan is Chen Shih-chung, who qualified as a dentist in 1977. Canada’s minister is Patty Hajdu, who had previously worked in public health on drug policy, youth development and homelessness and was the executive director of a homelessness organisation. New Zealand’s interim minister is Chris Hipkins, an education specialist temporarily in the post after the resignation of his predecessor earlier this month. The Singapore minister is Gan Kim Young, who studied electrical engineering at university before entering the civil service.

Mr Wells replaces Dr Minnis as Health Minister, who temporarily assumed the position following the resignation of Dr Duane Sands in early May.

During Sunday’s address, Dr Minnis outlined a number of duties that Mr Wells will now assume as the new Minister of Health, including “working with health officials on boosting immunisations and vaccinations” and improving the public healthcare system.

Asked yesterday if the country can expect to see more forthcoming information under his leadership as Minister of Health, Mr Wells said he expected operations to run as usual.

“This minister, the technical professionals will be able to update the nation on where we are and where we intend to go.”

Yesterday, Mr Wells also pledged to meet with all health professionals and associations that may have any concerns. This comes after some health associations have called for more communication from the Ministry of Health and then health minister, Dr Minnis.

He said: “I will meet with all of those individuals who are a part of the mandate and the portfolio that I would’ve been given. You have to respect the fact that Prime Minister has been Minister of Health for probably about six weeks but he’s also the Prime Minister of the country.

“I’m here now and I will meet with them and hear their concerns and seek to address them going forward.”