‘We Brought It On Ourselves’: Families Rush To Stock Up For Urgent Gb Lockdown Many Accept Must Happen 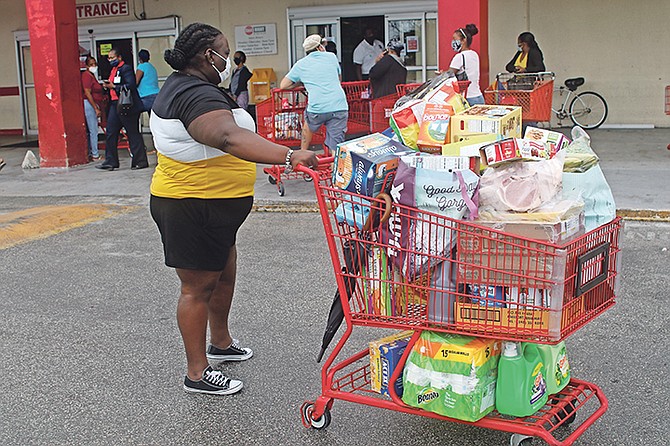 Grand Bahamians stock up on supplies before the island's lockdown. Photo: Vandyke Hepburn

GRAND Bahamians rushed out to grocery stores yesterday morning just after Prime Minister Dr Hubert Minnis announced a two-week lockdown starting this week in response to the virulent spread of COVID-19 infections on the island.

There were long queues at Cost Right, Solomon’s Lucaya, Sawyers Fresh Market, and Express Food Mart, where people were panic buying, stocking up on food, and other essential provisions for the next 14 days.

“It’s crazy, I came out here 10am and met a long line of people, was given a number and got inside around a little before noon,” said Patrick, a customer at Cost Right.

It took about an hour and a half to two hours for people to get inside to shop for essential items, he said.

Jackie Russell believes that the lockdown is necessary and said she was pleased that the government is assisting those who need food.

“I support the PM 100 percent and people must follow the protocols put in place, such as social distancing, wearing masks, and hand washing,” she said.

Ms Russell was very disappointed that so many Grand Bahamian travelled abroad once the borders reopened earlier this month.

“The PM said that travel only if you have to for emergency… and they went over there to Florida and brought it back, and now they giving it to their families. Some are walking around and don’t know they have it.”

Those persons, she said, should have quarantined upon return.

Grand Bahama has been classified as the new hotspot for COVID-19 infections after recording some 20 new confirmed cases on Monday alone. The lockdown will commence on Thursday.

Additionally, there is a 7pm to 5am daily curfew, and all domestic and international travel from Grand Bahama has been discontinued.

Resident Billy Ferguson says while it is a setback for the island, she supports the two-week lockdown to stop community spread.

“This is actually the last thing we need here in Grand Bahama. Yes, I know the storm was 10 months ago and for people like myself who lost everything, this is indeed a major setback. Keep in mind, I do see it as necessary to close the borders again, but I honestly wish we didn’t have to do it,” she said.

Ms Ferguson is not at all surprised that Grand Bahama is now a virus hotspot. “The minute the border opened a lot of Grand Bahamians decided to go to the US, in particular to Florida, where they know…there are so many cases. It is just so disappointing that whatever was so urgent for them to have to go for and bring it (the virus) back here.”

She noted that things will be tough economically for the island but she is hopeful that it will get better.

“Some of us are going to feel the pinch of the island lockdown because we were just now starting to get ourselves back to some normalcy. But I think it is for the best for us and will cause the cases not to rise if we are not moving about so much.”

Pastor Eddie Victor says the lockdown is “absolutely necessary,” as the disease is very contagious and deadly.

“Based on the recent severe increase in coronavirus cases in Grand Bahama in less than two weeks, it is clear that we have a major spread taking place in Grand Bahama,” he said.

He said that a friend of his in South Florida who is in the medical supply business, had 13 members of his family infected, including his wife, mother, and father. Despite all the medical treatments administered, intubation, blood plasma with the antibodies, and all the latest equipment, the mother passed away last Thursday.

“What I see is that we will be dealing with this virus for the next several months. We need to adhere to all the recommended protocols. We must become very conscious of others, look out for the elderly, and those who may have underlying health conditions and, of course, protect ourselves,” said Pastor Victor.

Former Bahamian ambassador, Forrester Carroll says to get a handle on infections, a lockdown is needed.

“GB will have to suffer the shutdown, and as much as I hate it, I think it is necessary; we have to bear the shutdown to get it under control,” he said.

Mr Carroll believes that before reopening the borders, the government should have got recommendations outside of Cabinet on the way forward through a bipartisan panel.

“We know we could not remain shut down forever, and that there would not be a vaccine to mitigate COVID-19 for about 18 months to two years, and that our economy is tourist-based, 80 percent of our employment comes from tourism. There should have been strict protocols before we reopen the borders, but obviously, that was not done,” he said. “The government dropped the ball on this one, and now GB is suffering because the competent authority made some bad decisions.”

I hear that some Bahamians came to visit from the US and said that they were not required to provide a test or quarentine when they arrived in Nassau before flying to Grand Bahama.
They came for a funeral in Grand Bahama, the church was packed (men of the cloth did not worry about social distancing). We all know what has happened.

Way too much slackness.

people are still walking downtown with no masks on. Are police officers giving out tickets? Ok, I will be the whistle blower, police officers, go down town and give out some tikets.

Way too much slackness is correct. I know of at least 3 families who,as soon as the borders opened,rushed to Florida for shopping. But then again with D- average population what do you expect?

And just think how much better off all Grand Bahamians would be today if dumb D'Aguilar and dumber Minnis had not foolishly decided to pre-maturely re-open our borders to travellers from the US, whether Americans or Bahamians, in the midst of out-of-control community spread of the deadly Communist China Virus in the US, especially in Florida.

GB will be locked-down for two weeks and the border will be opened the next day so they can travel again to sunny Florida. All the sensible countries banned flights to and from the USA, but because we love everything American so much we followed them straight into this disaster. The USA can print money when they want to and can deal with its citizens, can we? NO, but D-average Bahamas had to suck up to them, Minnis and Trump, till death do us apart.

People actually think its only going to be two weeks. I hope they're right....

Are you kidding?! When you're that big you don't use utensils to eat. You eat with your fingers and lick them clean after.

During this lockdown I hope the police would shut down those illegal 30 day shops. They are adding to this problem by selling liquor and encouraging unnecessary movement of people. This defeats the purpose of the lockdown.

you can't eat that much

Well one thing for sure, Bahamians are not dying of hunger...

The can afford to buy lots sister seems to be struggling hard at pushing her buggy loaded up such abundance considering many of our comrade Bahamalanders are left dependent upon food handouts and vouchers. Nod Once for Yeah in hope sister is planning drop off a little something of her bludging buggy's overflow to a place assisting the needy. Twice for No? Amen!

Folks in Grand Bahama FNM Country believe in bad treatment. Quote "we caused this' did they open the boarders? NO The competent Authority did. So why the guilt.? And beating up yourselves??.

I obeyed the rules. and I caused nothing.