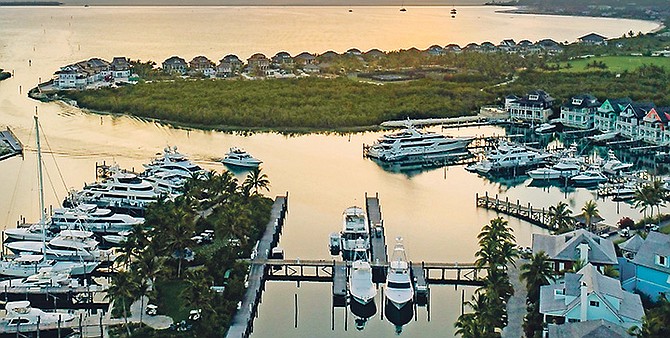 ABACO residents say they fear there could be more COVID-19 cases on the island after two workers employed at Baker's Bay resort tested positive for the virus this week, with one official calling for a "shut down" to avoid a surge.

Roscoe Thompson told The Tribune yesterday the situation, if not properly controlled, could be a recipe for disaster for the already struggling island, which was hard hit by Hurricane Dorian last year.

With basic necessities like electricity and running water still absent for many locals, the Marsh Harbour/Spring City township chairman said he is also worried about the island's lack of readiness to handle a surge of COVID-19 cases.

"For me, to sit here and tell you do I have that fear -- I can honestly say yes I am worried at this point of what has been done to contain this," he said. "And we have to remember that Baker's Bay is on Guana Cay and all that interaction between residents of that town.

"And that's what scary to me over here, all it takes is one person. You know and we don't have the facility and the capability to handle a pandemic or to even handle an outbreak here. I mean everyone here would have to be flown into Nassau."

As it relates to quarantine facilities on the island, he said: "You have some schools here that have rooms available, but the problem is electricity and water. So, do we have some areas that can be turned into isolation units, yes, we do but do we have the capability? I just don't see it.

"My thing is and I know people are going to get mad at me for saying it, but Abaco needs to be shut down right now. I mean they've done it before. They have closed the borders to Freeport, but they have not closed it to Nassau."

His comments came after Baker's Bay officials on Wednesday confirmed a Bahamian sub-contractor and Mexican construction worker from its property tested positive for COVID-19.

In response to the cases, Baker's Bay said it had "already commenced a COVID-19 response" plan, "including but not limited to masking, physical distancing, a COVID-19 oriented cleaning protocol, contact tracing, self-quarantining, and testing".

"The company has and will continue to place the necessary resources, expertise and prudent judgement in the care, safety and overall well-being of the Bahamian people and all employees," officials continued in a statement.

According to relatives, the Bahamian contractor, who is a father of two, is from Grand Bahama but commutes to Abaco where he works for Baker's Bay.

Sources close to this newspaper claim that the contractor was also on a ferry with about 50 other people to Guana Cay and Baker's Bay.

However, a Guana Cay resident, who wanted to remain anonymous, told The Tribune yesterday he believed it was more than 50 people on the ferry.

The local said: "It may be more than 50 because three ferry boats come in each morning with about a hundred (people) on each boat. That's 300 people."

In view of the new cases, the resident said he has decided to place him and his family in quarantine in an effort to safeguard against the virus.

He said: "Everything is still running. There has been no change and no tests kits and so nobody have nothing to test people with so the only thing I could say is that they're taking temperature checks of the workers when they get on the island but they should be doing before they leave Marsh Harbour as well.

"We got about 400 or 500 people on this (cay) right now and also, there's no power. Let me put it this way, I put myself in self-quarantine myself this morning. My wife and my children.

"You have people going in and out and people not wearing masks and people trying to stop them at the door but you only have one police officer and two defence force officers (on the cay) and they can't be everywhere all the time either."

Asked yesterday if he thinks there are more cases on the islands, the resident replied: "I would assume that there has to be more people who have it because the guy (reportedly) flew on Flamingo Air and everybody saying the fellow from Freeport brought it in and got it from Freeport."

The new cases would represent the island's first cases after months of being essentially COVID-19 free. The Ministry of Health did not include the cases in its update on Wednesday, which reported 25 additional COVID-19 cases, with four on the Berry Islands.

Berry Island Police Superintendent Dennis Brown told The Tribune that as a result of the new cases, many locals there are now on high alert.

He said: "The attitudes of the (Berry Islands) residents - they are taking this social distancing more seriously. Persons who wouldn't normally wear masks or much of them - everybody is adorning their masks now and social distancing.

"After they got word of the results that those persons were positive, everybody just went into lockdown. All of the restaurants and shops and thing were closed between seven and eight o'clock. Normally, they would close at nine and get in by ten o'clock but everybody, the road was just clean of the vehicles and so forth and so that signs of concerns.

"So, that's good that they are actually taking that attitude of this pandemic at this time and hopefully, we don't develop any more cases."

No doubt it was dumb D'Aguilar and dumber Minnis who approved 135+ unskilled Mexicans entering our country to do construction work for Bakers Bay at a time when so many young Bahamian men are unemployed and desperate for a job. And for the past several months Mexico has been ablaze with out-of-control community spread of the Communist China Virus so it's not at all surprising to hear that many Covid-19 cases are now popping up at Bakers Bay.

Except: there's a shortage of labor in Abaco, it's two cases, the Mexicans are skilled at work no Bahamian can or wants to do, they represent 10% of the total work force at Baker's Bay, and they all tested negative upon entry to the country. Pesky facts aside, these are indeed difficult times.

Get out of here with your facts and logic! Foreign man bad, Bahamian perfect in every way!

Bollocks! You're full of self-serving BS. And more likely than not you're a foreigner in our country exploiting the cheapest possible foreign labour that our corrupt government will wrongfully allow you to bring into our country to exploit.

Hogwash. Bahamians build Abaco 100%. Minnis is bringing in foreigners so that when they leave, their shady deals leave with them. No such thing as skilled work no Bahamian can or won't do. There are corrupt things that only an elected Bahamian official will do, that no one else in the world will do. I live in Atlanta. Bahamian politicians make me sick. Born and bred in Abaco. Doing things in construction in USA that Minnis says Bahamians can't do. PLP & FNM foolishness need to stop.