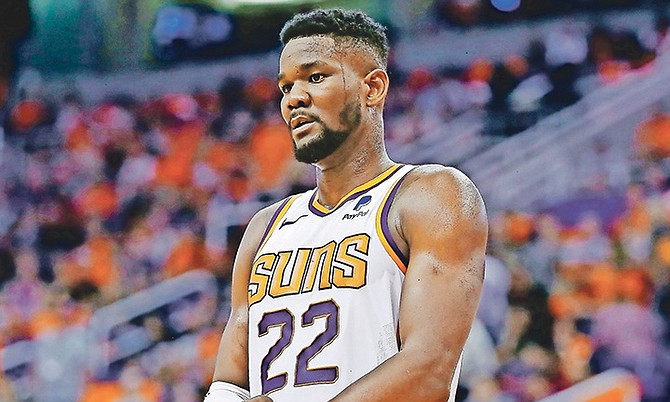 Deandre Ayton celebrated his 22nd birthday with a return to the court and led his Phoenix Suns to a win in their debut at the NBA’s season restart.

Ayton finished with 13 points, eight rebounds and two assists in just over 20 minutes of the Suns’ 101-88 win over the Utah Jazz last night at the ESPN Wide World’s of Sports Complex in Orlando, Florida.

The second year centre shot 6-7 from the field and also made the first three pointer of his NBA career.

Ayton scored six of his points in the first quarter and got out to a quick start, 3-4 from the field en route to an early 28-19 lead for the Suns.

Prior to the scrimmage, Ayton spoke to reporters on life in the NBA bubble.

“I’m trying to make a statement. I’m not just here all the way in Orlando, quarantining in a room, for no reason. I’m here to compete to the top level. If I can’t say it vocally, I can definitely be an example and show we mean business,” he said. “I honestly think, the time we’ve had here, our confidence level has actually risen. With Ricky being here and just seeing what we got when we play and we practice, we can tell we got something.”

The Suns will scrimmage with the Boston Celtics on Sunday, July 26 and the Toronto Raptors Tuesday, July 28.

Ayton met with a myriad of media outlets via Zoom and addressed the issues ahead to a return to the court including his personal goals, team goals and glaring health issues amid the COVID-19 pandemic. “I trust the league. It is dangerous. It is a thing. I think if we just follow the rules correctly, we will be good,” Ayton said.

Despite pundits showing little favour of the Suns’ chances of getting into the playoffs, Ayton said his organisation remains singularly focused. “It’s a little window to make the playoffs and make some history,” he said. “That’s all that’s on our mind. We’re young and hungry, and we’re ready to play.”

In his second NBA season, Ayton is averaging 19 points, 12 rebounds and 1.7 blocks per game while shooting 54 per cent from the field in just 30 games. According to Basketball Reference, his player efficiency is ranked at No.35 in the league at 20.5.