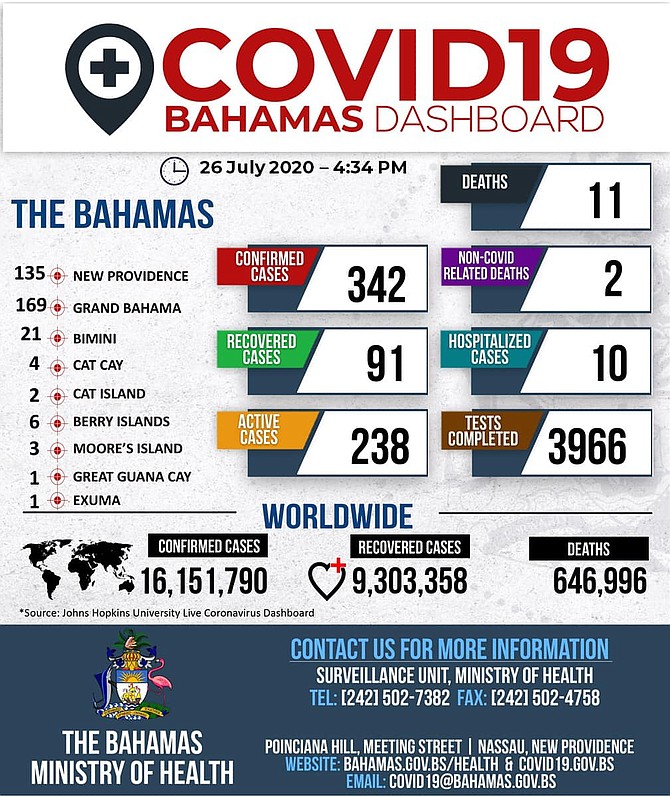 THE Bahamas recorded 16 new cases of COVID-19 yesterday, including ten on Grand Bahama and five on New Providence.

Exuma recorded its first case of the virus as well: a 27-year-old woman whose travel history was not disclosed.

This comes after ten new cases were confirmed on Saturday: six on New Providence and four on Grand Bahama. Three hundred and forty two cases of COVID-19 have been recorded to date.

Grand Bahama has emerged as the epicenter of the COVID-19 outbreak in the Bahamas. During a press conference on Friday, Dr Frank Bartlett, head of Grand Bahama’s COVID-19 task-force, said most of the residents with COVID-19 on Grand Bahama are between 40 and 49. The first confirmed case in the recent wave of cases was a 27-year-old man––a known contact of two people who recently travelled to Fort Lauderdale, he said.

“One of the persons who returned from Fort Lauderdale on June 30 would have become symptomatic on July 3,” he added. “Of that grouping, we have in that single cluster some twelve persons that can be directly linked to that group. Of that grouping we are testing contacts of contacts. The age range of the persons we now have in Grand Bahama is at our very youngest, six years, and our eldest person is age 84. Most of our positive cases are between the ages of 40-49 and right behind that grouping is the group of 30-39.”

Dr Bartlett said the most common symptoms in recent positive patients are cough and other cold and flu like ailments along with fever and respiratory issues. He said some people have also had muscle aches and headaches. A “small minority” have complained about a loss of taste and smell, he said.

He said the most common co-morbidity observed in the grouping is hypertension, then diabetes. Some have also had issues with obesity and sleep apnea.

Dr Bartlett said officials are not conducting mass screening right now. Officials are taking swabs from some people to get an idea of what the “burden of disease” is in the community,” he said.

“As of July 23, we have some 422 persons who are in isolation,” he said. “Also, as it relates to contact tracing, we have 230 persons we have in our listing and this group is growing on a daily basis based on the amount of positive tests we have.

“Of the 422 persons that we have in quarantine, 111 of them are at home isolating, we have nine in isolation at the government quarantine centre and we have some 20 persons who are quarantined at our government centre. The hospital at this point in time we are now only housing two COVID-19 positive cases. We would have transferred one of our cases to Doctor’s Hospital West in Nassau.”

From the Office of the Idiot Prime Minister: The (in)competent authority granted permission for two weddings, including a destination wedding on Harbour Island, during the weekend lockdown.

Like usual, THIS COUNTRY IS A COMPLETE JOKE!! MINNIS MUST RESIGN IMMEDIATELY!!!

Marina owners on Harbour Island are all over the newspapers and yachting press, begging party-yachts from Florida to head on over. Eleuthera won’t be covid-free for long. The marina owner at Romora Bay will have blood on his hands — as will this newspaper’s Neill Hartnell, who has been helping him spread the word. Bastards, all.

and what will happen ?

since independence there have been NO choices, it's the same as changing a dollar for 4 quarters

who wants and election at this point ?

only fools from what I see

Let the ppl vote for the historically and documented corrupt thieves in plp and their leader the official gangsta lawyer of the bahamas. I'm sure their governance plan involves: handing out lots of money and employing the whole country as civil servants, believing in bahamians, a gold rush to prosperity or whatever nonsense the masses desires to hear Or he has the DNA - the clampetts of Bahamian politics. Unfortunately, most of us are living in the past and romantising the Bahamas of 80s and 90s - refusing to accept that the world has changed. However, i blame successive govts for pandering and not preparing people

Things we a tad different then

Of the 422 persons that we have in quarantine, 111 of them are at home isolating, we have nine in isolation at the government quarantine centre and we have some 20 persons who are quarantined at our government centre. The hospital at this point in time we are now only housing two COVID-19 positive cases. We would have transferred one of our cases to Doctor’s Hospital West in Nassau.”

You forget. Minnis has ordered that the ministry of health use the Hurricane Dorian method of accounting for all statistics relating to Covid-19.

By the time Covid-19 is behind us we will have a very large negative number of deaths as our official death count from the deadly Communist China Virus. And that's because of the great wave of new births that will surely result from all of Minnis's curfew and lockdown orders. This great wave of new births to come will far exceed, and be deducted from, the Covid-19 related deaths giving rise to an impressive negative number of deaths for The Bahamas.

And all of these new babies conceived during the curfews and lockdowns will provide Minnis's family with a huge windfall of profits because they are in the baby delivery business as medical doctors. My oh my.

Not even one person per 1000 is or has been infected in the Bahamas.

What’s real, government controlling people like puppets in a cage.

Need mass protest to kick out the crooked And incompetent parts of this government.

Fake? Man are you insane? Just be quiet, people like you are the problem....

Guy got hit on motorcycle by car in Florida. His death was labeled covid.

Every death is labeled covid.