Insight: We Can Play The Blame Game But, At The End Of The Day, We Are All In This Together 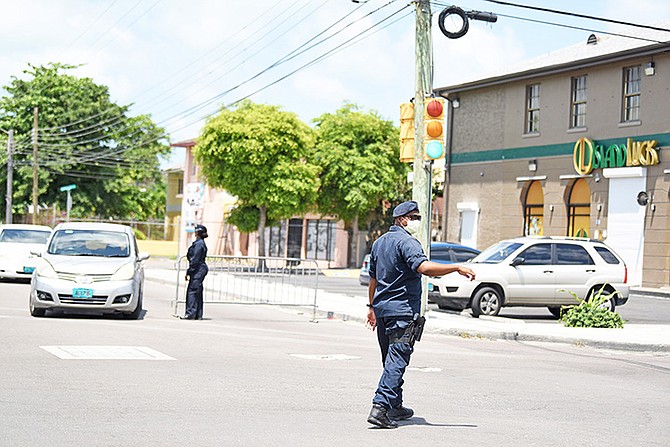 The Bahamian people will yet again have to endure lockdowns and curfews in the spirit of making the country safe. Photo: Shawn Hanna/Tribune Staff

IT seems we have sobered up. After 170 new cases of COVID-19 in the past two weeks - all presumably a result of the country’s premature reopening - the emergency powers have been extended for another two months. The Bahamian people will yet again have to endure lockdowns and curfews in the spirit of making the country safe, as it was becoming in the weeks before the July 1 reopening. For weeks, there were no cases. However, nearly as soon as the floodgates were opened, things went haywire.

Unfortunately, the citizens that ventured out of the country most likely picked up COVID-19 in Florida, which is still being battered by the virus with more than 400,000 cases and counting. For one, it is where most Bahamians frequent for shorter trips, and the government’s policy that exempted travellers returning within 72 hours may have allowed a number of those cases to slip in the country undetected. Moreover, we did have a number of citizens abandoning the social and physical distancing guidelines recommended by health experts.

Certainly, there is enough blame to go around if that’s where we chose to place our focus.

But, as I’m sure our newly minted Minister of Health can appreciate a good scripture reference, the government should cast the beam out of its own eye before trying to remove it from its brother’s – or in this case, its citizens.

To wipe the slate clean - which I believe we should be able to – all sides must be accountable and assume fault where deserved. In the case of the Bahamian people, we have not done the best job in remaining disciplined. From numerous beach parties to the way we wear masks under the nose or not at all, or questionably deciding to travel to a coronavirus hotspot in the middle of a pandemic – we’ve certainly not been as responsible as we should be, and many are now paying for it. Aside from being locked down and pushing the economic restart back, our decisions potentially cause harm to others as we can see community spread occurring on a number of islands. Grand Bahama, in particular, has in a matter of weeks turned into the epicentre of the coronavirus in the country.

Let me remind you that the healthcare infrastructure needed to support Grand Bahamians was crippled in the wake of Hurricane Dorian, as was its economy. This is certainly the last thing that Grand Bahama needs right now, and dare we talk of this current hurricane season? We are not doing ourselves any favours.

And while we are being constructively critical of ourselves, a government should not get away with scapegoating its people. That is not good governance. Nonetheless, we have heard a number of our leaders blame the citizenry with our recent setbacks. After placing a travel ban on Americans was ill received, the Minister of Tourism understandably took to damage control. However, despite noting Americans would have been slipping through the cracks from rampantly infected areas, the focus has only been on the transgressions of Bahamians who would’ve travelled abroad.

When asked his thoughts on this by the media last week, he responded: “Unfortunately, citizenry took advantage of their increased ability to travel and you will see that all of the cases are really domestic grown.”

Similarly, the talking points coming out of the competent authority have pointed to the same.

But it would have been refreshing and respectable to hear our leaders take ownership of the fact that they should have restricted travel, barring citizens from travelling to coronavirus hotspots or implement tighter restrictions on testing.

No doubt, we are writing the book as we go, as Prime Minister Minnis pointed out during the ministry of health coronavirus update on Friday. Still, we have to consider all of these decisions and their consequences. Now, not only has tourism gotten a black eye, but if anyone thinks that the Bahamian people won’t remember this at the polls in 2022, you’re selling yourself a dream.

Right now, talk of elections in 2022 is presumptuous, as if we fail to get this right, many people may not be here. We may be a resilient people, but beyond the physical health impact from a virus, the mental health implications on a nation under siege with non-communicable diseases and the stress caused by a plummeted economy are enough to kill a populace that already scrapes to get by.

The most unfortunate part, perhaps, is how commonplace it is for Bahamians to state they feel like second-class citizens in their own country. The men and women who rise to the ranks of leadership do not seem as equals to the common Bahamians who elevate them to high statuses.

This has to be corrected, and the timing is perfect as we are seemingly back to square one in the middle of a surging virus.

The government has shown it can be capable. Although this comes after a few false starts and failures here and there. Nonetheless, they’ve shown themselves unafraid to grow in some of the most challenging conditions.

The Bahamian people is also capable of giving grace to the government. But I can assure you, it won’t come when their fingers are firmly pointed at us as though we’re the only problem here.

There is only one way to the next side of this pandemic, and that is together. Rather than talking about it, the government has to be about it. However, that will only come with a complete reframing in the minds of the government and the citizenry that we are all Bahamians.

Before we can all be a part of the solution, first it must be recognised and acknowledged that we have all been a part of the problem.

And we all know what the code term "We are all in this together" stands for. Yep, The Trib is now a lowly media agent for the talking points of the far left. LOL

The FNM Government capable? unafraid to grow in some of the most challenging condition Strachan?

What are you talking about ? I suppose this is another doc is your Shepherd revelation..

Sadly, the US is doing more testing of COVID-19 and tracing, plus hospital in the US have the ventilation and equipment. There are many Bahamians who are not tested. Why? due to the lack of testing. If Bahamians want to fly into US get testing or medical help. Why is the Bahamian government making it difficult.

Bahamians are undisciplined true, we lack the ability to think beyond ourselves and look to doing what is best for the greater good, we are selfish. We lack in testing and contact tracing, and we lack in Law Enforcement leading to all our social dysfunction. Finally we are lacking strong leadership, otherwise all these things would not be happening. Our so called leaders are incapable of understanding the true meaning of Ownership, so how can we expect the rest to have pride and take ownership in their own actions and ultimate fate?

Blame is all we have known.

If we are all in this together why wasn't I invited to the captain's ball?

Somehow I could hear Phil Stubbs' 'Potcake' barking in the background.