Quick-fire wedding: Couple rush to get married before weekend lockdown 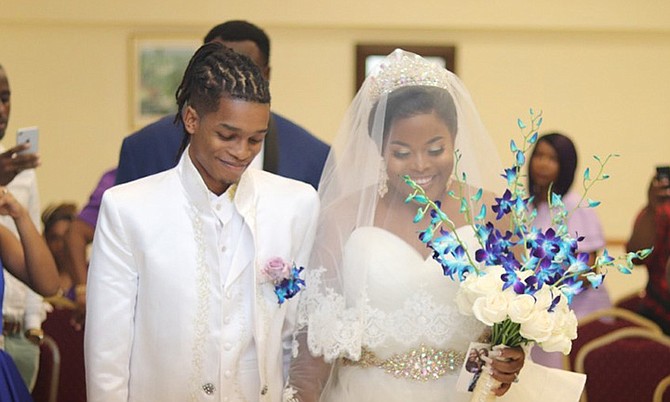 A COUPLE who postponed their wedding in May due to COVID-19 restrictions rushed to pull off their wedding ceremony on Friday before the weekend lockdown could spoil their plans a second time.

Steffon and Shaquel Evans did not anticipate they would have to arrange a wedding ceremony in mere hours despite planning for the event for weeks.

The bride and groom’s worst nightmare was realised on Friday after Prime Minister Dr Hubert Minnis ordered another weekend lockdown and announced new wedding rules just hours before their wedding celebrations were set to begin – causing the couple to have “a jump shift 30-minute wedding on Friday night”.

Describing the ordeal as “extremely challenging” and “nearly impossible” to make happen under the circumstances, Mr Evans told The Tribune: “It was a beautiful ceremony, but it was very rushed. We had to cut our vows short, numerous people couldn’t make it. And because it was going to be small and different and we’re going to make it look good, we spent thousands of dollars on décor…I don’t know what’s going to happen but we have even wrapped our mind around all the things that we spent that we can’t get back.”

He told The Tribune that after the prime minister’s orders, he decided to go through with a brief ceremony the same night.

He said: “We got word that we’re going into lockdown and so the only thing I could think was let’s do it today and it’s incredibly challenging and difficult and not recommended circumstances to be in and we lost a lot of money.

“People had already started making final preparations, we had one of our groomsmen travelled – almost couldn’t get in the country because the borders soon closed, but he just made it in and he’s a Bahamian, but he lives in Arkansas.”

Mr Evans said he knew when he saw the announcement of a press conference that “based on what had happened in Freeport that he was going to cancel any funeral or wedding or whatever and so it hit me that it’s only legal for us to do this in the foreseeable future today and so I called my wife”.

His wife told The Tribune yesterday she was completely shocked by the unexpected turn of events. “Well, when he called me, the first thing I said was what? I was just in so much disbelief because as women, when we plan hair and makeup that takes hours and to get that notice at 2 o’clock and I was like well my hair wasn’t even installed yet,” Mrs Evans said. “And then with the sudden announcement, everyone went into panic shopping and that was a lot of traffic.”

Before the start of the COVID-19 pandemic, the couple had planned to have their wedding on May 30.

Despite the COVID-19 restrictions on weddings at the time, Mr Evans said he and his wife still decided to get officially married in late May, with only ten people in attendance.

The duo said they planned to have a more elaborate ceremony in July to celebrate their union with close family and friends.

Mr Evans said: “We knew from the get-go that the full wedding was not going to happen in May and so technically speaking, my wife and I got married on May 29th and what happened was we were due to celebrate with family in the full, the regular wedding style (on Saturday).”

He added: “We almost didn’t get married in May because we were going to do the ten-person wedding and the registrar was closed. We wrote the PM three times starting from April 14 and to this day, we had never gotten a response. We didn’t get our marriage licence until the week before the ten-person ceremony.”

What was most disheartening throughout the whole ordeal, he said, was learning that two couples received permission to have a wedding with more than five people present while he and his wife has yet to receive a response from the Prime Minister since he contacted his office in April.

In a statement by the Office of the Prime Minister on Sunday, officials said two pre-planned weddings were given permission by the competent authority to be held with more than five people in attendance during the weekend lockdown.

To this, Mr Evans said: “You know somehow, this official statement did not come out 6pm even though the Facebook notice showed up so I’m trying to understand how between 6pm and the office of the prime minister technically closed and on Saturday, they were able to get an exemption.

“I don’t understand it and it’s a slap in the face of the Bahamian.

“We were asking for guidance, we went on their Facebook page, we emailed and they had a suggestion thing and any avenue we could find because given this was the beginning so everywhere was still closed either completely and we couldn’t just show up and drop off a letter. So, I’m like who do you need to know? Whose phone number do you need to have? It’s an absolute disgrace.”

Mr Evans said the ordeal has taught him that “not enough is being done to bolster that level of accountability and governance” from our governments.

“I do feel that not enough is being done to bolster that level of accountability and governance. And it’s not an attack. It’s standing up for what should be ours.”

Hopefully they each have a fixed deposit account in the amount of $2500 - to make a total of $5000 which is how much you need for a divorce in this country. Nobody getting married ever thinks they would want a divorce (otherwise they wouldn't get married, duuhhh) - but it happens. When you find yourself in that situation, even with the $5000 in cash and even with nothing in dispute such as kids of land, God help ya. You will find every obstacle known to man in your path. People wait over ten years for divorce. I've heard that now you need to make an application which has to be approved before you can even submit your Affidavit. In other words, you can't even file for divorce - you need to ask permission to be able to file. Huh??? You hear all kinds of stories. You think talking to a lawyer will help? Nope. They can't give you any information about the procedure, i've heard that is called "collusion." So all you can do is pay your money and pray. I implore anybody thinking of getting married in this country - to think twice, thrice, and whatever the word is for 4 times. If you still aren't wise enough to decide "NO" - then at least go to Miami to do it. Note carefully, that those are my opinions based on rumors that i have heard and my inability to find facts. If you are able to find facts that make it seem sound to you - then by all means proceed (and for God's sake publish the facts in the newspaper so that everyone else can know them).

"my hair wasn’t even installed yet"

lol. nevertheless she made it and from the picture looked beautiful

I rebuke@jokeyjCk, I hope in 20 years theyre talking about the 5000 as the college fund starter for their firstborn child

No masks, no social distancing of guests......just saying

And, for those of you who are still planning to have a wedding, change your plans.

Marry with the 5 guests in Zoom.

Have the caterer package cake slices in a beautiful box and have the guests pick it up from your home after the Zoom meeting, they can watch on their phone while parked outside waiting for their cake.

Stupid minnis short orders that make no sense. I commend everyone for following previous rules and if the 'competent authority' changes his rules on the fly, screw him!

This one ga know.