Rolle: ‘I Think The Nfl Should Delay The Sport Or Cancel It This Year’ 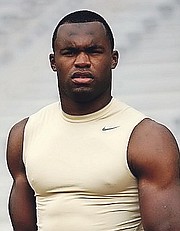 Rolle appeared on CNN’s Anderson Cooper 360 yesterday to discuss the way forward for the NFL and its plans to return to the field amid the COVID-19 pandemic.

“I do not think it’s safe to return right now. I think the NFL should delay the sport or cancel it this year to allow the wonderful women and men on the front lines to really get ahead of this pandemic and make it safe for everyone to come back to the sport,” Rolle said.

“If the NFL wants to be part of the community, I think it needs to be responsible and think about what is actually happening in the community right now. A pandemic happening and infection rates going up and hospitalisations occurring, PPE at high demand.”

For the NFL to have a safe return, Rolle suggested that the numbers of cases would have to dramatically decrease and proper protocols in place for the league to become “a leader at the forefront and put the players’ safety and their families’ safety as a premium.”

He said: “When you have states that are hot beds and players coming from these places, I think it’s very difficult to sort of say, ‘I want to social distance,’ in a sport that’s inherently close. There is a “need to be cohesive in the locker room and in the huddle and walk-throughs close together. It’s very difficult.”

Thus far, 25 NFL players have announced their decision to opt out of the upcoming season - the first to do so was Kansas City Chiefs guard Laurent Duvernay-Tardif.

Like Rolle, Duvernay-Tardif balanced football and the medical profession and holds a doctor of medicine and master of surgery from McGill University.

Duvernay-Tardif spent the offseason working on the frontlines at a long-term care facility in his native Quebec, Canada.

“Being at the front line during this offseason has given me a different perspective on this pandemic and the stress it puts on individuals and our healthcare system,” he said in a statement.

“I cannot allow myself to potentially transmit the virus to our communities simply to play the sport I love. If I am to take risks, I will do it caring for patients.”

Rolle was also on the frontlines of the COVID-19 pandemic at Massachusetts General Hospital. He detailed his experience for several major media outlets to bring further awareness and bridge the gap between the worlds of sports and medicine.

In his third-year as a MGH neurosurgery resident, Rolle said the dedication and approach he took to the field has carried over in the field of medicine. “Football has never left me,” Rolle said. “I still wake up in the morning and think of the operating room like a game, like it’s showtime, let’s perform. I gotta do what I gotta do because people are counting on us right now. This is our time to help very sick people. So that motivation continues to drive me every single day.”

Locally, he was on the ground in Grand Bahama to assist the Hurricane Dorian relief effort with his area of expertise.

Rolle was a team member of the MGH Office of Global Disaster Response (GDR) when they travelled to the Bahamas to provide medical support.

Through his foundation, Rolle previously established his “Play-4-Progress” programme in the Bahamas and aimed to introduce three basic principles to its participants – the fundamentals of American Football, education and personal development.

Rolle played three seasons with the Florida State Seminoles and won the Rhodes Scholarship. He was selected by the Tennessee Titans in the 2010 NFL Draft. In 2012, he signed with the Pittsburgh Steelers and announced his retirement from the NFL in 2013.

He went on to graduate from FSU’s College of Medicine in 2017 and was matched to a neurosurgery residency at Massachusetts General Hospital and Harvard Medical School.