Residents Flock To Stores And Gas Stations Ahead Of Storm 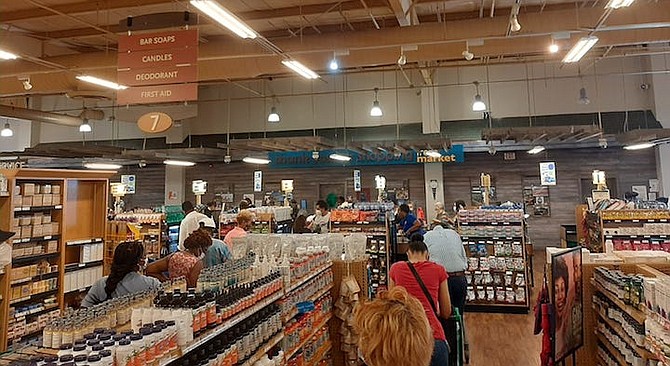 RESIDENTS in New Providence flocked to grocery stores and gas stations early on Friday morning, queueing in long lines to receive food and other essential items in preparation for Hurricane Isaias.

This comes after Isaias strengthened to a Category One hurricane late on Thursday night, packing maximum sustained winds near 75 mph.

Some islands in the south-eastern Bahamas have already started to feel its affects.

Weather officials predict that the storm could potentially intensify to a category two as it moves through the north-western islands.

When The Tribune visited Super Value on Mackey Street Friday morning, scores were assembled in long lines, waiting to enter the store to stock up.

The social distancing measure of standing six feet apart was also being adhered to.

One resident, Carla Latimore, said while she and her family have prepared as best as they could for the storm, she felt the government should’ve lifted the 7pm curfew earlier in order for people to better prepare.

She said: “The last minute the prime minister sends the word ‘okay, he’s going to lift the ban’. We knew from the beginning of the week that this was travelling because here it is even though he changed the lockdown to a shorter time, people still on the road until 7 o’clock trying to get home.”

Her friend, Aretha Turnquest, added: “Some people get off at 5:30, some get off at 6 so it’s impossible with traffic to get home in time for the curfew at seven. I think that’s a bit much so at least say nine or ten (so people could’ve prepared.)”

However, one local shared different sentiments on the matter, saying he fully supported the measures put in place by Prime Minister Dr Hubert Minnis.

Food stores, water depots, gas stations and pharmacies are permitted to open until 8pm today after Dr Minnis announced that weekend lockdown measures will be relaxed so people could prepare for the storm.

According to Bahamas Meteorology Department director Trevor Basden, all islands are expected to be impacted by the storm.

Storm surges of one to three feet are anticipated. He said lots of rain is expected and that most streets in New Providence will flood.

The category one storm also comes at a time when the country is experiencing a surge of COVID-19 cases, with a total of 508 cases reported and 401 of those cases active as of Thursday.

Resident Luke Lawrence said he feels the storm couldn’t have come at more vulnerable time for the country as a result of Hurricane Dorian last year and now, the COVID-19 pandemic.

“I also wonder how it’s going to go for them people who are self-isolated with the virus and how are they going to be able to cope with preparations. At the moment, I think we’re a bit underprepared and we haven’t even recovered from last year and with the cases spiking as much as they have, I just feel that we’re not as prepared as we need to be.”

Large crowds and gatherings. Just what the doctor ordered!