Peter Young: Are We Heading For Another China Crisis With Hong Kong? 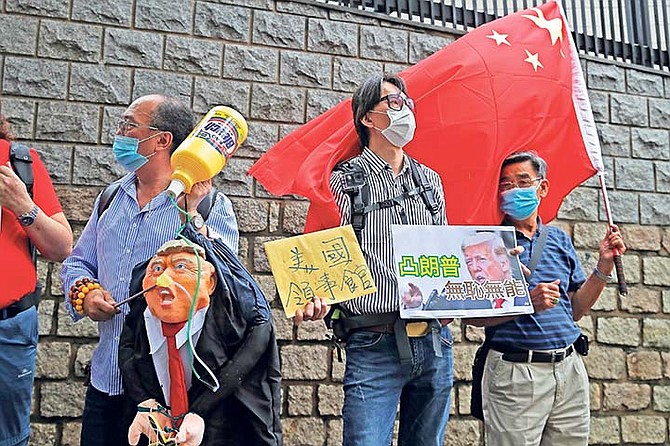 Pro-China supporters hold the effigy of U.S. President Donald Trump and Chinese national flag outside the US Consulate during a protest, in Hong Kong at the weekend. (AP)

THE former British colonial territory of Hong Kong has attracted the world’s attention again, but for potentially harmful reasons. Last week, China’s parliament, the National People’s Congress, rubber-stamped a sweeping new draft security law to be imposed directly on Hong Kong and its population of over seven million. It makes a mockery of the territory’s Basic Law constitution and of the Sino-British Joint Declaration of 1984 which created a new status for Hong Kong of “one country, two systems” at the time Britain handed it back to China in 1997. This provided for a special semi-autonomy guaranteeing democracy in the territory for 50 years including freedom of assembly, free speech and elections and an independent judiciary, all of which underpinned Hong Kong’s role as a global financial hub.

Beijing’s new security law now threatens these freedoms since it criminalises what is termed subversion, separatism, terrorism and treason. It is claimed this is aimed at political dissent in Hong Kong led by the pro-democracy movement there. It is also claimed Chinese intelligence agencies will be able to operate in Hong Kong for the first time - and it is likely there will be a tougher and more violent clampdown on protesters concerned about the erosion of the territory’s cherished freedoms and responsibility for its own affairs in the face of Beijing’s meddling in internal matters.

This has led already to fears in Hong Kong about activity by secret police in helping the local authorities control demonstrations, together with arbitrary detentions, increased surveillance of individuals and even interference with the internet.

It is the case, of course, that last year the Hong Kong government’s controversial Extradition Bill, enabling local authorities to send criminals or suspects to stand trial in China, precipitated a resurgence of civil unrest following the Umbrella Movement in 2014 which demanded universal suffrage and brought parts of the city to a standstill. Although this bill was later withdrawn, the demonstrations continued with demands for full democracy.

At the time, with memories of the Tiananmen Square massacre of 1989 still vivid, there were fears of intervention by Beijing after President Xi Jinping had condemned the violence and warned against the activity of separatists that was threatening China’s sovereignty over Hong Kong which, as a Separate Administrative Region, was part of the mainland.

Some commentators argue that last year’s mass protests, bordering on anarchy and involving an estimated two million people over a period of months, pushed Beijing’s patience to the limit. So this new security law, they argue, should come as no surprise. But it is a clear breach of China’s international obligations under the Joint Declaration, and it is now being suggested China used the COVID-19 crisis as an opportunity to crush democratic protest in Hong Kong while the West was distracted by the pandemic.

Despite this, there has been a rapid reaction from Western countries amid mounting international concern over the ending of democratic freedoms in the former British colony.

A Joint Statement by the UK, US, Australia and Canada was quickly issued, warning the new law would ‘dramatically erode Hong Kong’s autonomy and the system that made it so prosperous’ – in the words of British Foreign Secretary, Dominic Raab, Hong Kong had flourished as a bastion of freedom, and it is reported he is considering an extension of UK visa rights for the territory’s British National Overseas passport holders.

President Trump has condemned Beijing for breaking its word over Hong Kong’s high degree of autonomy by proposing the new security legislation. In what looks likely to be a serious blow to its position as a financial hub, he said the US no longer regarded Hong Kong as autonomous and thereby warranting special trade status as a separate customs and travel territory from the rest of China.

Many regard this significant step by China as part of its increasingly belligerent approach to the rest of the world in its hunger for global primacy. But there is insufficient space in today’s column to examine in depth China’s efforts as an authoritarian communist state with global ambitions to achieve pre-eminence as the new superpower – whether it is President Xi’s ‘Belt and Road’ initiative or its growing military influence in the South China Sea and renewed threat to Taiwan or its ongoing trade war with the US.

There is now a danger of a large scale collision in Hong Kong between pro-democracy protesters and a new level of unyielding and aggressive policing. Former Hong Kong governor, Lord Patten, has called for the appointment of a UN special envoy to monitor violations of human rights and to encourage dialogue and reconciliation while the US has suggested a virtual meeting of the UN Security Council. But, since Beijing’s declared policy is to safeguard what it sees as its national sovereignty and security, it opposes any outside interference in Hong Kong’s affairs, so the prospects of resolving differences over the issue appear bleak. But it is likely that - together with recriminations over coronavirus - this issue will take centre stage in international affairs during the coming months.

Those who study British politics know the saying of one-time leading Conservative MP and Cabinet minister, Enoch Powell, about all political careers ending in failure. But one of his equally telling observations was that for a politician to complain about the media was like a ship’s captain complaining about the sea.

This came to mind while following the recent major row in Britain surrounding Prime Minister Boris Johnson’s chief political adviser, Dominic Cummings, pictured, for allegedly breaking the coronavirus lockdown rules. Mr Johnson has been fending off demands by the press and his political opponents to sack him. One result of his sturdy defence of his senior staff member and refusal to let him go – together with the government’s perceived failures in handling the virus – has been that his personal approval rating has taken a major hit, though there were signs yesterday that he is already bouncing back.

Mr Cummings’ sin was to drive 260 miles during the lockdown from London to his parents’ farm in Durham in north east England in order to deliver his four-year old son to a niece to be looked after there because both he and his wife were unwell with symptoms of COVID-19.  The Prime Minister insists he did not break the rules about staying at home because acting in the best interests of a child was considered an exception and the action of a caring parent. I watched the live broadcast of a press conference Cummings held to explain his actions and most of what he said seemed reasonable to me since it was clear he and his wife were worried about the welfare of their child and, following their parental instincts, they did the right thing for him.

Nonetheless, many believe his actions were not justified under the rules. So there has been a furore because, as a senior adviser at No 10 Downing Street, he has been at the centre of the government’s handling of the crisis; and British people hate any hint of double standards, with the rich, privileged and famous getting away with breaking rules while others are penalised for doing so.

Certainly, given his position, it would have been wiser for him to have shown some regret and remorse for disregarding - at least - the spirit of the regulations even though he believed he acted reasonably in the circumstances facing him. But the story has run and run, not only because Mr Cummings has made many enemies with his notoriously ruthless and arrogant behaviour since working for the Prime Minister but also for the reason that he has made a name for himself as being the mastermind behind Brexit and for securing an overwhelming victory for the Tories at last December’s election. He is also seen as something of a political genius who knew how to woo working class voters away from their traditional support for the Labour Party and vote for the Conservatives.

Thus, many on the Left of politics want to see the back of him. But this has been taken to extremes with an unacceptable level of abuse and harassment with protesters demonstrating outside his home in a quiet, tree-lined London street.

It is disturbing to see the British liberal elite and its media supporters in almost lynch-mob mode, with a nasty level of personal malice and implied violence beyond the usual rough and tumble of politics. Criticism has included a rant by one BBC presenter which is now being investigated for lack of impartiality. But this type of behaviour is not what Britain is about and I, for one, am glad to see the Prime Minister supporting his colleague and refusing to sack him.

Many now believe enough is enough and hope a line can finally be drawn under this unsavoury episode. But it is a cautionary tale for politicians elsewhere to resist being hounded by an overzealous media into action that may be both unjustified and against their better judgement.

Amid all the coronavirus gloom and misery of the last few months, I wonder how many people will have been encouraged and heartened by the remarks of Deputy Prime Minister and Minister of Finance, Peter Turnquest, at a televised virtual budget press conference last Thursday. He was accompanied by Financial Secretary, Marlon Johnson, and, as far as I could see, took questions from members of the public as well as the press.

Everybody is only too well aware the FNM Government has been faced with the double disasters of Hurricane Dorian last year and now the COVID-19 crisis, and Mr Turnquest has been frank about the difficult state of the economy and the rising level of debt as a percentage of GDP. But he seemed to me to be refreshingly positive about the country’s capacity for economic recovery after the pandemic, saying also that, with expected strong growth, there should be no need for new taxes.

For his part, Mr Johnson added the deficit had been going down before Dorian and coronavirus and he anticipated that trend would continue once the country returned to some sort of normality.

No doubt, the sceptics will regard all this as overly optimistic while the cynics always maintain the utterances of politicians should not be taken at face value. But, watching the performance of the minister and his colleague and listening to their informed and considered comments, I found it reassuring – as a permanent resident with a chunk of capital tied up in a property – to know the management of the nation’s economy seems to be in such good and capable hands.