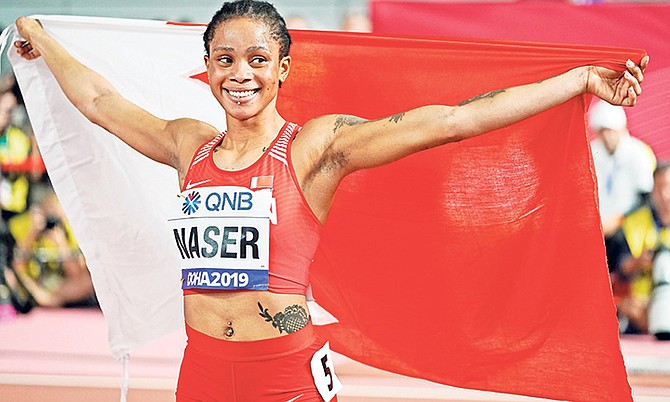 Naser, who ran the third-fastest 400m in history when she pulled away from Miller-Uibo on the final curve to snatch the gold at the 2019 World Championships in Doha, Qatar, was provisionally suspended by the Athletics Integrity Unit last week.

But in comments made on social media, Naser denied being a drug cheat and indicated that it was normal to miss three drug tests in a year, which is cause for concern according to the AIU, an organisation within the World Athletics, the governing body for the sport.

“I’ve never been a cheat. I will never be,” said the 22-year-old Bahraini in an Instagram live video. “I only missed three drug tests, which is normal. It happens. It can happen to anybody. I don’t want people to get confused in all this because I would never cheat.

“This year I have not been drug tested. We are still talking about the ones of last season before the World Championships.”

When contacted over the weekend at her home in Florida where she resides with her husband, Estonia’s decathlete Maicel Uibo, Miller-Uibo offered no comments.

The 26-year-old, who is preparing to defend her title at the 2020 Olympics, which was postponed from this year until July, 2021, referred The Tribune to her management team.

Her manager Clyde Bryan, the chief executive officer of On Track Management, Inc, said they are not focusing on their arch rival. He would only offer this simple statement on the matter. “Shaunae is focused solely on her season, if there’s one, and wishes everyone peace and safety during these challenging times,” he said.

In a stunning performance at the World Championships in Doha, Naser ran 48.14 seconds to claim a surprise gold medal, beating the Olympic champion, Shaunae Miller-Uibo, who had to settle for the silver in a national and NACAC area record of 48.37.

Naser’s time was the fastest in 34 years, with only the East German Marita Koch, in 1985, and the Czech athlete Jarmila Kratochvílová, in 1983, having run faster.

While none of the women failed a drug test, their times are regarded as suspicious given drug-taking in eastern Europe was systemic and state-sponsored during the 70s and 80s. Naser, who moved from Nigeria to Bahrain when she was 14, dispelled any concerns about whether or not her career has been tainted by drug allegations.

“Hopefully, it’ll get resolved because I don’t really like the image, but it has happened,” said Naser, a former youth champion. “It’s going to be fine.

“It’s very hard to have this little stain on my name. I would never take performance-enhancing drugs. I believe in talent, and I know I have the talent.”

Athletes are required to provide regular updates on their whereabouts to make it possible for anti-doping authorities to carry out surprise testing outside of competition. A violation means an athlete either did not fill out forms telling authorities where he or she could be found, or that athletes weren’t where they said they would be when testers arrived.

Three violations within 12 months can lead to a suspension if the athletes can’t justify why they weren’t available for testing, according to the rules of the World Athletics.

Naser’s case comes to light after three other major doping cases highlighted among Bahrain’s top female runners in recent years, including the Olympic steeplechase champion, Ruth Jebet, and the Olympic marathon runner-up, Eunice Kirwa, who tested positive for EPO, and the world indoor 400 champion, Kemi Adekoya, who was found to have taken anabolic steroids.

All were banned for four years.

Three years ago at the 2017 World Championships in London, England, Naser won the 400m silver medal behind American Phyllis Francis. Miller-Uibo had a comfortable lead going onto the home stretch when she tried to exert her 6-feet, 1-inch frame about 30 meters from the finish line, but pulled up and ended up in fourth place,

Miller-Uibo went on a sensational 25-month winning streak in both the 200 and 400m races since the defeat and the build up to the much anticipated rematch with Naser in Doha.

In that memorably spectacular performance, Naser came off the final curve of the 400m ahead of Miller-Uibo and surged to the impressive victory, adding to the gold medal to the bronze she received a few days earlier in helping Bahrain’s mixed 4 x 400m relay team that finished third behind the United States and Jamaica.

The Bahamas didn’t participate in the event, although Miller-Uibo joined Steven Gardiner, Anthonique Strachan and Michael Mathieu in winning the initial mixed relay race held at the third edition of the World Relays at the Thomas A. Robinson National Stadium in 2017.