Insight: Opening The Borders Is A High Risk Game We Could Live To Regret 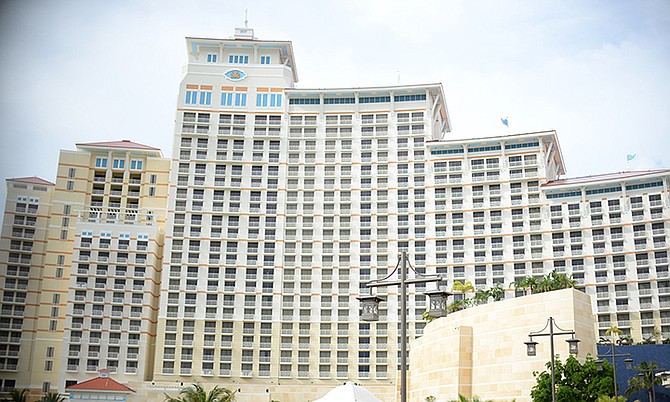 BAHA Mar President Graeme Davis announced the resort will not be opening for the next three months.

IT is no secret that success in the hotel business is a simple numbers game – the quantity of heads in beds. Hence, we should all hopefully be able to understand what Baha Mar’s delayed opening until October means in the grand scheme of things. Sure, most of us are sick of this new normal. No one is a fan of the lockdowns and the unencumbered authority held by the prime minister during the state of emergency. And certainly, no one wants to be laid off or have their business shuttered. All of this is totally understandable.

Our economic problems explain why we are so eager for border controls to be lifted and for tourists to return but the danger is this could only make matters worse.

With a general theme in the US surrounding the falling away of maintaining physical distancing measures – particularly in states such as Florida where the vast majority of our visitors hail from – we are playing a high stakes game of Russian roulette. As former Minister of Health Dr Duane Sands says, it is definitely a gamble amid increasing COVID-19 cases in Florida.

What is troubling is how little discussion around this is being had by the government. Or if there is discussion, the Bahamian people aren’t being let in on those conversations.

Everyone is so hellbent on reopening that little consideration is being given to what we are welcoming and who we’re putting at risk.

Surprisingly, and as difficult a decision it certainly must have been, Baha Mar President Graeme Davis announced the resort will not be opening for the next three months. Stating the resort’s commitment to continue paying employees over the period, we can appreciate that a six-month haemorrhaging in any industry is difficult. Particularly when your business model is so heavily reliant on uncontrollable variables such as the health of your customers – and perhaps even more important, your staff.

This, if nothing else, should help those who are only pushing for the country to return to what it was before to see that it is just not a realistic proposition right now and possibly for the near future. COVID-19 has turned the old world on its head and Bahamians, due to our lack of diversification of revenue streams, will suffer if America doesn’t get its house in order.

Just as foreshadowed in this space weeks ago when Americans would have been celebrating Memorial Day weekend, a resurgence has taken place in COVID-19 cases. Individuals’ desires to live “normally” and ignore social distancing guidelines, along with the mass protests, are currently creating the perfect storm for Floridians.

Numbers taken from a study by the Miami Herald revealed 64 of the 67 counties in the state saw roughly a 42 percent increase in cases of COVID-19 heading into the second phase of its reopening earlier this month. On a more alarming note, Thursday and Friday marked the state’s highest single-day tallies – 1,698 and 1,902 respectively. In more sober-minded parts of the country, the fear is real. Director of the Harvard Global Health Institute Dr Ashish Jha believes coronavirus-related deaths could reach 200,000 by September. This was indicated under the premise that the current number in the U.S. would remain consistent within the current range of 800 to 1,000 lives being lost per day.

What does all of this mean for us? Nothing good, that’s for certain.

Our options are limited, as we know we are not going to be able to revamp the country’s economic model overnight. Nor will we benefit by kicking successive governments and citizens in the pants for decades of short-sightedness and an inability to modernise.

Now, modernisation is so far from our reach when the vast majority of the country’s GDP is made on the back of tourism. Baha Mar, our second largest tourism draw only behind Atlantis, may have only been the first domino to fall. We should not be surprised if we hear a similar response coming from Atlantis in the coming weeks as we all wait and watch. Unable to do anything else, we are truly at the mercy of what’s happening in America. And any ideas or dreams that the country’s reopening will lift us out of this quicksand in the short-term are nonsensical.

Thankfully, Bahamians will be able to enjoy some of the freedoms we were used to and local businesses will be able to reopen. However, the decision made by governments past and present to focus so heavily on tourism will come back to bite us. Make no mistake, the hoteliers aren’t calling the shots as nothing can be certain when dealing with such a monster. Even the decision to delay reopening until October is not guaranteed as the decision makers in our main source market - the U.S. - aren’t concerned with who travels to The Bahamas and who doesn’t. They certainly have bigger fish to fry with 2020 being an election year and President Trump already showing an eagerness to hit the campaign trail to rally his supporters.

That, along with the protests and Americans just wanting to live life again, all indicate tough times for Bahamians. This is what needs to be understood. Our government would be better off setting these realistic expectations for the Bahamian people.

We may have successfully evaded COVID-19 domestically up until this point, but at a cost most are not willing to continue paying. And as the conversation of expanding our testing capacity has diminished, it would seem the Bahamian people need to demand that both testing and screening at the border become the highest priority come July 1. Else, the prices we would have paid in lost income, dashed business plans, opportunities to bury loved ones and many other things we once considered normal, would have all been in vain.

Allowing untested tourists in july 1 would be suicidal. Start slow and test as you go.

Travelers testing or not testing prior to coming here shouldn't even be a question!

Nobody will ever convince me that the United States, being the richest and most powerful country in the world couldn't have simply gone through the lock-down process like every other country in the world. If they had, they would have been on par with the rest of the world and ready to open its border.

On their present trajectory, unquestionably COVID19 will force them to shut-down in a few short weeks forcing them to go through a long, painful, protracted shut-down.

How they couldn't see this coming will forever be one of the greatest mysteries of all time!

there are two 'l's in the word travellers!

Opening without pre-flight testing is insanity!

It is insanity, but how do you confirm that or the validity or authenticity of those pre arrival test: do you say you only accept results from x, y or z testing facility, lab etc. I thought they said that everyone will be tested on arrival now.

If only the Bahamas would have taken this opportunity to stock up on tests, PPG and ventilators. Unfortunately, that is not the case it appears. So, now the government has to borrow over $1 billion to stay afloat. Will somebody really loan them the money? Is that just the beginning if everything stays shut? Are they going to need another $1 billion by the fall? Without tourists the Bahamas is crushed. How much money can the government afford to pay out to unemployed people? Can they do it for another 6 months? What about the businesses that will be gone forever. As Fauci said this virus can be tamed-somewhat-if people wear masks and social distance. Hopefully, with far fewer tourists this can be accomplished and save some of the businesses that will go under along with the jobs. I think the government has realized that they don't really have a choice. Not everyone is getting the Covid in Miami. But, you have to be smart-and careful.

We don’t care, we think the 50 - 100 - of course more in some instances - paid to NIB as contribution have elastic in, or can sustain a perpetual unemployment benefit.

We are occupied by a people and their leaders who refuse to think. Maybe can't. Maybe that was part of the plan. No surprises here. We have gone backwards as a society of people for our entire lifetimes. Everyone had to get a bigger piece of the pie for themselves. Everyone else in the country got less. And, now here we are, backs against the wall, with none of the material or intellectual resources to make sense of anything coming our way. Almost fitting.

The Bahamas needs to implement for all tourist entering this country a‘ stay in zone’ measure policy until test results are recieved.. they will remain under the ‘stay in zone’ measure. and stay at their respective hotels until covid - 19 test results are recieved If they came from high risk areas . A positive test should result in being sent to a quarantine area at their hotel.

It has now been pretty much proven beyond a doubt that the vast majority of people will be asymptomatic when exposed to the virus. The WHO has officially advised us that asymptomatic transmission is extremely rare. We also know that morbity rates were grossly over exaggerated and the practice of ventilating patients was far more likely to kill them than not. Isn't it about time that we recognized that the threat of this disease to the wider population is not as bad as the main stream media initially had us believe. Isnt it time that we asked why our Prime Minister chose to scare the sh.. out of us and lock us down rather than explaining to us how our own immune system is perfectly capable of protecting us (so long as we arent stuffing junk food in our pie hole all day). As a doctor, our elected leader chose to follow unscientific advice and forced us all to stick our heads in the sand for three months and the net result is that we are exactly back where we started in March. No less immune from reality. We have to be brave and confront this virus head on or we are going to perish as a sovereign nation.

"the vast majority of people" who contract Covid are definitely not asymptomatic. At most 50% are more and more studies are showing that number to actually be down around 20%. Also, ventilating did not kill any more people than no ventilating. Only 1 in 5 people on a ventilator have been recovering, but without ventilators all 5 people would die. They don't put people on ventilators who are able to breath on their own.

If you are really a doctor, then I fear for your patients, and hope that your malpractice insurance is paid up.

May as well shut the country down until a cure comes if we are going to insist on tourists having the test. Much easier and cheaper for them to go some where in the US. I would expect we can look forward to hearing many more then just the 15-20% being let go at Bahamar in the near future, hope everyone ready to pay a much greater amount in tax going forward to fund the next couple of years.