Face To Face: Father Scott On Ducking Bullets And Ministering To The People 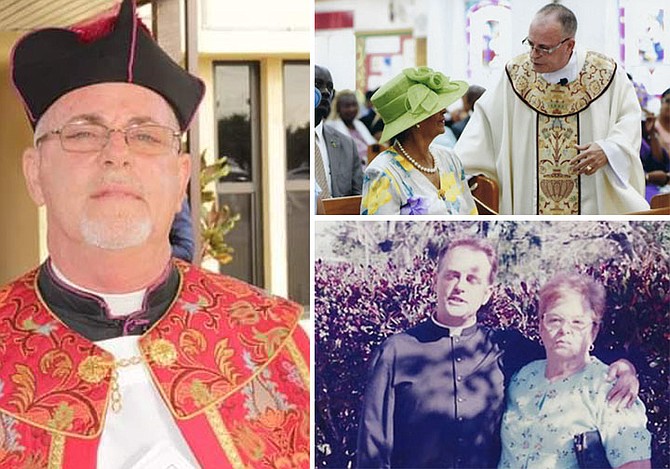 This month, “Father Scott” celebrates 35 years as a priest. Top right, talking to former Governor General Dame Marguerite Pindling in 2015 on the 30th anniversary of him becoming a priest. Above right, as assistant priest at St Matthews in 2000.

Growing up, I attended Holy Cross Anglican Church with my family. For most of my years there, the late Canon Neil Roach, affectionately called “Father” by many, was rector. He was assisted by a priest who found a way to connect with the young people of the church and make a difference.

Canon Peter Scott had a down-to-earth way of connecting with us as young people and inspiring us to be our best. But he also wasn’t afraid to ask the hard questions we needed to hear to help steer our course. Now as an adult, I can appreciate what he did for us and the role he played in our lives.

This month, “Father Scott”, as we call him, celebrates 35 years as a priest and a servant of many. As he reflects on the journey, he is satisfied that the Anglican church is in good hands. The church continues to grow and there are “lots of talented young priests and lay members who are not afraid to grab the future and run with it”.

The world has changed so much since the time he was ordained, and the priesthood is no exception.

“The life of an Anglican priest is so much better in these modern times than when I started out, yet in some ways they are more challenging,” he said.

“While we have more comforts and conveniences, priests today have to deal with a much smaller global village in which social media rules the world. Priests today need to be savvy and technological if they are going to remain relevant in today’s world.

“While I am not yet in the pasture (but looking lovingly at it), my generation of priests need to let go of certain things, and let the younger clergy have more say. We can still steer and guide, but learn to let go and let God run things!”

He remembers well what it is to be young and in need of every opportunity to succeed. He was born on August 20, 1956, to the late Ross W Scott of Canada and the late Marjorie EL Scott (nee Smith) of George Town, Exuma. The youngest of four children, with two brothers and one sister, Peter grew up in a quiet neighbourhood called Shirlea, nestled between Mackey and Shirley Streets. In those days, “the neighbourhood was your family”, and the Scott children did all the childhood and teenage things that were common during the late 1950s and 1960s including playing rounders, shooting marbles, spinning tops and playing hop scotch.

The young Peter showed promise from an early age. When he was about nine years old, he was selected to be in the first men and boys choir at the cathedral, formed in part in preparation for Queen Elizabeth’s first visit to The Bahamas in 1966.

By 1967, Peter had secured a seat at the Government High School. He graduated a year before The Bahamas became an independent nation, so his years of schooling were interesting ones from a historical standpoint.

“My time at the Government High School was during an awakening in national politics, as the first majority-led Government had taken office in 1967,” he recalls.

“There were only four of us white Bahamians in my class, but we had little racial issues then. For the most part, life was good at home, school and church. My mother was working to take care of four children (my father died when I was five years old). Times were tough and often we had to walk or catch rides, wear the same clothes for a year or until you outgrew them; yet we were happy. People cared for each other… it was a caring society.”

He was only 15 years old when he graduated from GHS. He went on to attend CR Walker Technical College, now the Bahamas Technical and Vocational Institute (BTVI), where he studied accounting/office procedures. He joined Barclays Bank in 1973; moving on to Dominion Life Assurance Co and then Nestle Company Ltd.

During all that time, from his first performance in the church choir until the present day, Peter’s church life grew tremendously. As he grew from a boy to a young man, he was getting more and more active at the cathedral, becoming a youth leader, and being active in Scouts, Cubs, the Christian Youth Movement, and the Servers Guild. He even became a Sunday School teacher.

“I think it was a natural progression to feel a calling to be a priest, for I loved serving and helping others,” he said.

In 1976, Peter was all set to go to Codrington College to test his vocation for the priesthood, but he got cold feet and decided to wait a bit.

“Maybe I was unsure, maybe I did not want to leave my mother alone, he said of his trepidation.

“Whatever it was, I could not fight the call of God, and I left in 1980 for Codrington College. I graduated in 1984 with a licentiate in theology (UWI) and a diploma in pastoral studies. I was ordained a deacon on July 2, 1984, and I was called to the priesthood on June 28, 1985. both ordinations took place at my home church, Christ Church Cathedral.”

After his first ordination, he was sent to St Barnabas under Father Gilbert Thompson, where he stayed until July of 1987 when he was sent to St Peter’s Parish, North Long Island. During his 35 years, he has also served at St Margaret’s in North Andros, St Andrew’s in Exuma, and Holy Cross, Highbury Park, New Providence, where he served when I was a youngster and has returned as the rector today.

“When I joined Holy Cross as assistant priest in 1992 for five years, it was really a good time in my ministry, especially with the youth of Holy Cross,” he said eagerly.

“Never would I have thought I would be back, but here I was and I got to work! With two successful fund-raisers, we were able to do a lot of things with the church building, which had begun to deteriorate in some ways. All in all, we have spent over $200,000, which we raised by the sweat of our brow. Now that the church was back in good shape, we were ready to move into evangelism and outreach, then COVID-19 came! However, we have been feeding over 100 persons weekly.”

He has also served other New Providence parishes including St Matthew’s, St John’s College and Holy Spirit. He was made a Justice of the Peace in 2011, and a canon of Christ Church Cathedral in December 2013. He continued to educate himself throughout this time and he obtained his Master’s degree in education (school counseling) in December 2002 from Kent State/COB. His mentors include the late Dean William Granger who was his parish priest, and who “was never afraid to give him a tongue lashing” when he strayed off course.

“His bark was worse than his bite though, and I knew he deeply cared for my success… he taught me conviction,” he said of his mentor.

“The late Archdeacon Murillo Bonaby was another mentor who kept me close and involved to ensure I went off to be a priest. He taught me so much about humility and passion for God’s service. Then there was Canon Warren Rolle, who tutored me over a year at his home twice weekly in religious studies, and taught me the importance of how to know and understand what we are teaching and preaching. ‘Know your Craft’ was his watchword.”

He shared some of the highlights of a career that proves that faith can truly move mountains of perceived limitations.

“I remember my first night alone in the rectory in Simms, Long Island, when the generator was cut off. Lord, the silence was overbearing…no electricity, no TV, nothing! No people living close by, just the clinic and the jail around me. I remember ducking bullets after getting caught between rival drug lords in Lowe Sound, Andros, in the late eighties.

“In 1998, I was transferred to St Matthew’s Church, Nassau, after much begging to be closer to my ailing mother. While I grew to love St Matthew’s and her people, it was a trying experience to work there. By September 2002, I was appointed chaplain at St John’s College and assistant pastor at St Christopher’s Church, Lyford Cay - a wonderful time in my life and ministry in so many ways. I often think my best years in ministry were with the staff and students of St John’s; so many good times, so much accomplished. I was able to get the school chaplains put as school administrators, and I was able to secure a better Chaplain’s office in the guidance department. I also started confirmation classes and services in school, and had it done three times, during 2002-2010. It was sad to leave St John’s College and move to Holy Spirit Parish in Chippingham, but move we must.”

While his journey continues to move on and he reaches the twilight years of his ministry, Father Scott has learned a few lessons in life: “People are basically good at heart but life’s circumstances often change who they are - don’t judge a book by its cover. Open the book! Not everything that glitters, is gold; so learn to accept some things and leave the rest to God to work out.”