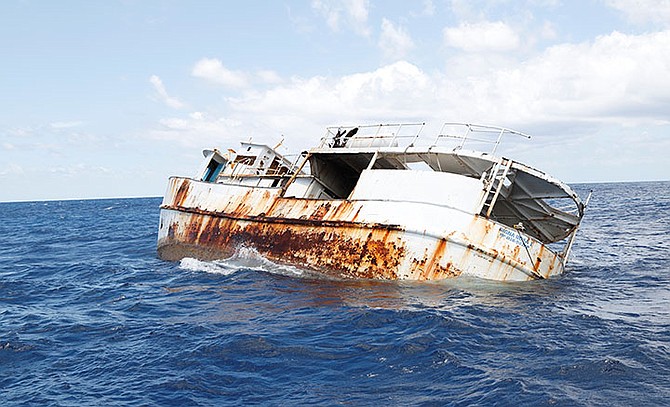 The vessel was escorted to its watery grave west of Coral Harbour by HMBS Lignum Vitae, under the command of Lieutenant Owen Sands, last Thursday. A team of engineers from the RBDF engineering department led the way in the sinking.

“This vessel was the last of three Dominican fishing vessels to be apprehended by the RBDF in 2018 for poaching in Bahamian waters,” a statement from the RBDF said. “Another two Dominican vessels were sunk earlier this year by the Royal Bahamas Defence Force. On May 4, ‘DFV Paul’ was sunk, and on May 12, ‘Chicky’ was also escorted to be sunk in waters off Coral Harbour.

These three vessels were sighted for poaching in Bahamian waters on October 13, 2018 by RBDF patrol craft HMBS Madeira. After fleeing into Cuban territorial waters, the Cuban Border Patrol intercepted these vessels, and on October 14 with coordination from the RBDF, the Cuban government agreed to transfer the three Dominican vessels along with all 123 Dominican poachers and fishery contents, the RBDF said.

The crews of the vessels were arraigned, convicted and sentenced in the Magistrate’s Court following the arrest.

“The disposal of these vessels is part of the Royal Bahamas Defence Force’s hurricane preparation contingent plan,” the RBDF said. “Authorisation for the disposal of these vessels was obtained from the Office of the Attorney General. All due diligence was taken to ensure that the sunken vessels are not a threat to the environment, and would evolve to become artificial reefs for divers.”

Let's all hope the water is deep enough so they can't come back in a few years to harvest any crawfish from the sunk vessel. I can't help but wonder if any of our corrupt political elite or their cronies have an ownership stake in the larger Dominican poachers who some Spanish Wells' fishermen claim are making a fortune from illegally fishing in our waters.