DIANE PHILLIPS: This pandemic is no respecter of reputation 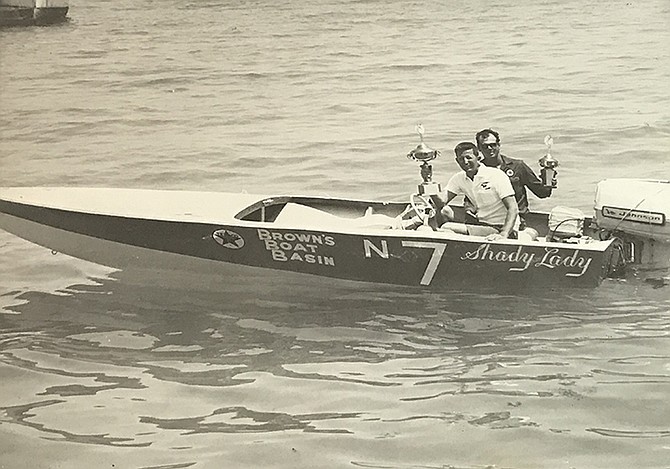 The Shady Lady, powered by an Evinrude motor. The motor manufacturer is just one of many economic victims of COVID-19.

We see the statistics, the staggering numbers of new cases in places where beer taps flow freely again or people gather in peaceful protest convinced their moral conviction could keep COVID at bay.

We read the headlines, we gaze at the lines of people awaiting food parcels and NIB cheques so we know it’s real.

And yet it’s the oddest things that make us stop whatever we are doing and gulp. It’s things like reading that Hertz which announced it was filing for bankruptcy and this week said it was selling off thousands of cars around the world cheap that literally drive home the impact of a global pandemic in tangible ways.

Filing for bankruptcy in May, fending off creditors, laying off 14,000 employees is one thing, admission to selling off thousands of cars this week was the jolt that made it feel real. Watching Hertz go under, taking with it its oh-so-familiar yellow and grey signage and branding across every city with an airport and some without was one of those moments that reminded us COVID is not someone else’s issue.

Even if you never rented from Hertz in your life, watching it fail as a result of lack of travel was like standing by and watching a waiter with a tray piled high with hot dinner platters slip on grease, loosen his grip and gasp as the whole pyramid of plates comes crashing down. It’s happening before your eyes and there isn’t a thing you can do to stop it.

Hertz, once so prominent that #2 Avis based its “We try harder” ads on trying to catch up to the unstoppable #1, became the roadside detritus of a crisis that is testing every economy.

The bigger shock for anyone who ever had the joy of running a powerboat was the end of the era for Evinrude which announced on May 29 it was discontinuing production.

Evinrude invented the outboard motor. The company was founded in 1939, introduced its first 10 horsepower outboard motor at the 1947 New York Boat Show, celebrated its 75th year in 2014 and continued holding its own for 81 years despite newcomers to the market - Johnson (later its partner), Mercury, Yamaha and most recently Suzuki.

To most, Evinrude was the staple of powerboating for decades. It was, to the runabout, what Chevy was to America. When its outboard engine and another early entry into the market made by Johnson became so similar, there was little surprise they merged to become OMC in 1936 and while Johnson was still being manufactured, their parts were interchangeable.

Stunned by Evinrude’s announcement, I called Robert Brown whose family has hauled and repaired powerboats with outboard motors at Brown’s Boat Basin along Nassau’s harbourfront for more mango seasons than anyone can remember. His uncle Sidney, who founded the busy boatyard on East Bay Street, had a boat called Shady Lady, a speed demon of her day back in the mid-60s.

In the heyday of Miami-Nassau powerboat races, a local race followed the next day and Shady Lady, only about a 21-footer, was so hotly-powered that to keep from porpoising (a nautical term for leaping in and out of the water), the Brown family placed young Donald, Robert’s cousin, on the bow as human ballast. Yes, he is still alive.

Shady Lady was powered by a Johnson, Evinrude’s sister motor. As Robert told me this week: “Evinrude and Johnson, they were the only game in town.” Johnson stopped production in 2007. Now they are both gone.

So when history records the victims of COVID and light is shed on those who suffered because visitors did not come to our shores – the jitney, taxi and limo drivers, hotel workers, owners and operators of small businesses who had to sneak inventory out because they could no longer pay the rent, remember it took down giants, too.

Hertz and Evinrude, on the streets and in the water, industry leaders who once set the bar and, in prolonged crisis, could not hold on. It turns out this pandemic is an unwelcome equaliser with an appetite that does not discriminate. It devours big and small alike.

Please allow me to apologise to someone I admire and inadvertently offended this week. We sometimes do things that are so out of character we cannot believe we did them and this time, I did it twice and of all the unlikely odds, the same person was the unintended target both times.

I honked at a traffic light that had changed, seconds went by and I assumed the person in the vehicle ahead was texting so honked again to alert them. Such was not the case and I humbly apologise.

I’ve even been in cars with people who honked and begged them not to. This time, I had just come from many hours of a stress that I cannot explain and I beg the gentleman’s forgiveness.

Where do they get those street names?

Since I’m on the subject of driving, the Ministry of Works announced recently it was engaging in a repaving exercise. Among the streets affected would be Bird Court, Sisal Road, Weasel Court and Muttonfish Drive.

When it comes to street names, I don’t think there is a place in the world that can compete with The Bahamas for weird and wonderful ways to identify a piece of pavement. Bird, Weasel and Muttonfish are pretty cool, though my all-time favourite street name in the does-not-belong-here category remains Lovers Lane. It would be fine if the lane wound up at the end of a remote road with a view of the sea like inspiration point.

Unfortunately, Lovers Lane in Nassau runs between a seminary and a cemetery which takes a little of the pleasure out of the idea of it being a thoroughfare for lovers.

Lady, you’re lost at sea! Just so you know, Sidney Brown was Roberts’s father, Donald, Sidneys brother, was Roberts’s uncle, both sadly deceased for many years now. OMC was purchased some years ago by Bombardier and is still producing engines under the Evinrude name brand, the E-Tech series their latest product.

She's likely taking some serious meds but they don't seem to be helping her all that much.