Insight: We Put Our Trust In The Police But Rogue Officers Must Be Held To Account 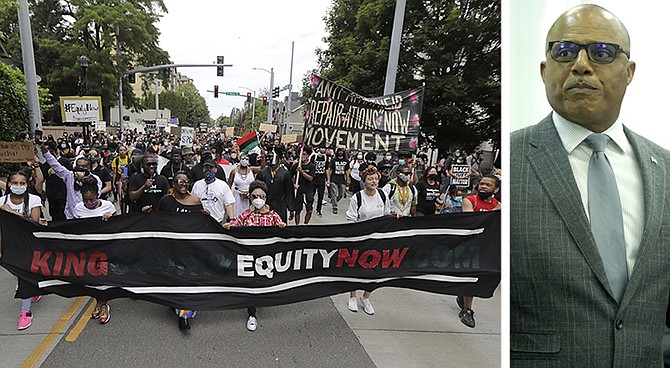 COUNTLESS images of police brutality have nearly been just as common as the mantra of “protect and serve” - widely used terminology in policing globally. And yet, The Bahamas refuses to take much-needed steps toward enhancing the level of accountability that currently exists in local law enforcement.

As peaceful protests are still ongoing throughout the US, The Bahamas, while not being anywhere near as racially divided, still experiences much of the same divisiveness between citizens and the Royal Bahamas Police Force. Within the past few years, we’ve all seen multiple police-involved killings which continue to magnify the wedge between the hard-working men and women of the RBPF and the communities they serve. Indeed, one-sided accounts of the events that have led to the deaths of those who supposedly provoked violent encounters with the police continue to grow in number.

With police usually seeking to defend the institution against criticism and pro-tough-on-crime tactics being supported by a large sector of society, the families that mourn their dead are often villainised. It is understandable, as the society we live in leads us to vilifying individuals with street aliases that portray them as hardened, criminal-mined savages.

Fear, anger and outright exhaustion are all feelings representative of living life in The Bahamas, particularly in New Providence. In avoiding the criminal element, many of us have inadvertently become prisoners. From ensuring we’re off the roads and home at a certain hour, to having routines of circling the neighbourhood when we get home and having efficiently timed strategies to get the kids out of the car and in the house before being robbed at gunpoint – indubitably, we underestimate the strain on our mental health.

Many of us, rather than sleeping at night, have so much anxiety that we get up multiple times to check our surroundings for intruders.

Perhaps this is why when officers riddle a car with three individuals known to them full of bullets, the vast majority of society believe it is justified and hardly give it a second thought. With aliases that indicate a level of street prowess held by the three men shot and killed by police, the names their parents once affectionately gave them merely join the growing list of those who have fallen under a hail of bullets sprayed at them by the police.

No surprise, however, as warnings of such encounters have been foreboded by National Security Minister Marvin Dames and police commissioners – former and present. Back in March, speaking plainly, Dames sent a clear message to those who attack the police telling them they will suffer the consequences. And speaking to this most recent event, he spoke in support of the officers on the scene, stating that “they did what they had to do”.

Certainly, none of us should presume to know what it’s like suiting up and hitting the road as a Bahamian police officer. One can only imagine the level of aggression encountered daily by our officers. Thus, approaching this conversation in this manner, it should be stated this is not an attack on the police. Rather, it is only an acknowledgement that just as there are good and bad people in society, the police force is no different, with officers recruited from the very same communities in which they are duty bound to protect and serve.

That said, policies need to be in place that ensure our officers are on their best behaviour at all times.

In the past few years, we’ve seen videos recorded by citizens showing excessive force and police brutality exhibited by officers of the RBPF on the populace, as well as visitors. In addition, we’ve also seen police-recorded videos displaying egregious misconduct by officers.

However, when it comes to how these matters are handled, we constantly are stonewalled – being told the police are handling these occurrences.

Thus, let us not over-simplify this discussion by making it black and white. Just because criminals mean our society no good, it does not remove fault from poorly executed policing. Neither does it minimise the responsibility of the police performing their duties in a professional, fair and just manner.

After all, these men and women took an oath to uphold the law.

To this end, in 2020, should we really still be allowing our police force to be policed by itself? Understanding the deep obligations officers feel to this fraternity, how can we expect to live in an equitable system of law and order if the scales are so severely imbalanced.

Most, if not all, have encountered poor policing. Yet, the impetus to implement stricter measures of accountability are terribly ineffective. As backlogs in the coroner’s court cause these discussions to taper off into an abyss of irrelevance, years continue to mount between these questionable killings and any form of review that will bring clarity to what actually took place.

On the heels of these recent events, Dames has announced body cams and dash cams will be in effect by the month of August.

But what does any of that even mean if the system is inefficient and strongly lacking in accountability?

If the names George Floyd, and most recently, Rayshard Brooks, among countless others, mean anything to you, then you should know the technology is merely a talking point if the policies remain unchanged. Bad policing can’t operate within a special set of guidelines as it pertains to law and order.

Moreover, the era of protectionism in Bahamian policing must be held to account. Else, the divide and distrust that exists between the police and the citizenry will be sure to widen.

Officers of the Royal Bahamas Police Force must continually go through sensitivity training consistent with best practices in modern policing. Likewise, the policy makers must be minded not to show partiality to our officers, regardless of their allegiance to the law enforcement fraternity if the system is what is desired to be fixed.

As long as misconduct can be cloaked, the populace is at the mercy of the nature of the officers we encounter, and therefore, stuck in a cycle of perpetual distrust.

We ought to want to live in a better society than that.

Agreed, life is about balance. Some people will defend the police and say... why you taking the side of low-down criminals? Others will call for investigations into police behavior and call for some officers to be fired.

But it's about balance. Police have a right to defend themselves if their life is at risk.
But citizens have a right to be treated as innocent until proven guilty. The way police beat suspects who are under arrest is unacceptable. But officers in charge turn a blind eye.

I can never forget that the father of the 3 year old who was abducted said how the police beat him to try to get him to confess.
Then it turned out it was a woman with mental issues abducting children. I agree that an independent body needs to investigate police. There is too much corruption right now and too many cover-ups. SMH

The force will only get a vote of confidence from me when they start mandatory drug or alcohol testing for ALL officers involved in situations with use of excessive force or discharge of weapons, on or off the job! There is no small amount of substance abuse in that organization.

The commissioner of Police said if any one confronts the Police. they should be prepared to met their maker It means the police will kill you.

Revengeful . Mean spirited and vindictive is the order of the day. and the man had the gall to say how he was brought up. Not well at all.

Accountability means allowing the police to be ultimately policed by others, rather than themselves. As shown in the US, police unions are a major part of the problem. This is not just a problem in the police department. With no real freedon of information act, and virtually no accountability up and down the government, and a Prime Minister's office that has strong authoritarian tendencies, there is little hope for true justice in this country. While we may not have the racial divide in this country, anyone who says we have justice and accountability here is delusional. Our government can't even manage to count hundreds of dead bodies properly. And, when asked about it, what answers do we have? None!

this article is a waste of time, rogue officers should always be held to account for their transgressions. all citizens should be held responsible for infractions whether from theft,murder or otherwise.

And that includes our politicians!