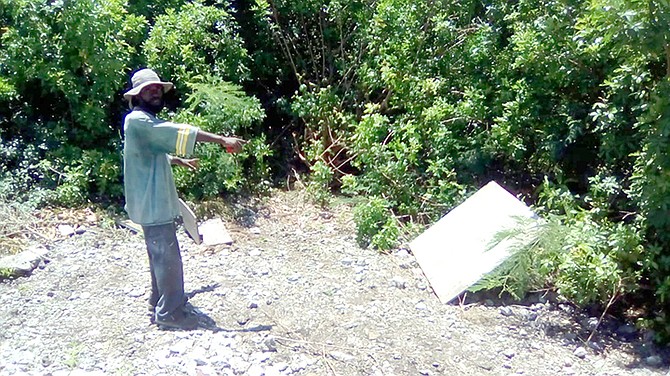 A relative pointing out where Elisia Theoc Loristol’s body was found. 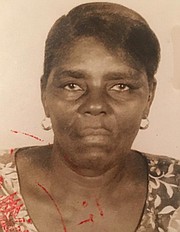 THE murder of a 79-year-old Haitian woman in Eight Mile Rock has left a family in shock over the brutal manner in which she was killed and left in bushes “like an animal”.

Elisia Theoc Loristol was found chopped to death in bushes on the family’s property in Pinedale, Eight Mile Rock. She was reported missing to the police on Friday evening after she did not return home.

Police and family members searched for the elderly woman but could not find her. Her body was found around 7am on Saturday.

A “little boy” found the body and notified the family, a relative of the deceased told The Tribune yesterday.

According to Loristol’s daughter, her mother left home Friday morning and went down the street, not too far away to another property the family owns to do some yard work — weeding and tend her garden — but never returned home.

When asked how they were coping with the tragedy, the woman was too traumatised to speak, but her son Ricardo Prince interjected saying: “We are not too good, this is tough on everyone. We still can’t believe it.

“We are still shocked. To see someone you love just gone just like that; she did not die the proper way, she gone like an animal.”

Mr Prince said that his grandmother was a nice woman who did not deserve to die that way. He described her as a kindhearted person who would feed anyone who was hungry.

“It hurts because everyone know her and everyone love her a lot because she helps everyone. If she has her last, she will give it to you. If you need help, it does not matter who you are or where you come from, she will help (you). To take a life like that of an elderly woman is not right and a lot of people upset about that,” he said.

Wadner Destine, a relative, said how the elderly woman was killed has deeply hurt the family.

“We were searching for her all Friday evening, and a little boy found her the next morning,” he said.

“That hurt me, and I can’t even sleep. She was doing little work around the property weeding and a young boy take her life and chap her with her own cutlass. And what make it so bad is he take off her clothes…” said Mr Destine. “That is an elderly woman whose life he took away. It hurt us a lot. And her daughter still ain’t catch herself good since Saturday.”

According to police, a Haitian man is in custody assisting them with their investigations into this latest homicide.

However, Mr Prince claims that news of man’s nationality is false.

He claims that the young man in custody is a Bahamian whose family is from the Turks and Caicos. “I heard he recently got out of prison for armed robbery,” he said.

“The reports on the news about the suspect being a Haitian is not right; he is not a Haitian,” he said.

Investigations are still underway and police are urging people with information to assist them.

The killing is the eighth murder on Grand Bahama for the year and the 31st nationwide, according to this newspaper’s records.

Very sad and disturbing. The red spots on the photo used for the article makes it even more chilling given the manner in which she was killed. RIP