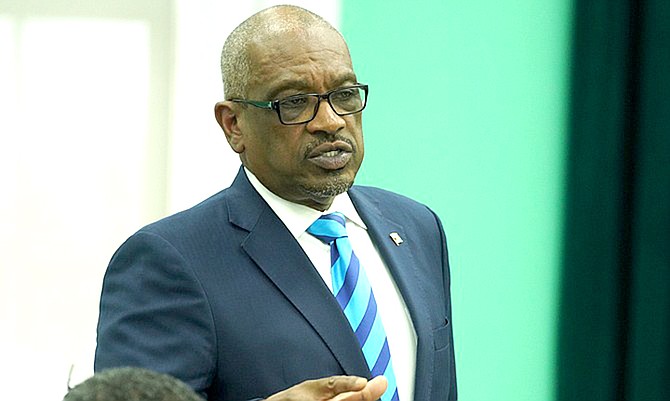 PRIME Minister Dr Hubert Minnis said his emergency powers will be extended into July as the country enters Phase Five of his reopening plan.

During his budget communication in the House of Assembly yesterday, Dr Minnis also announced the daily curfew has been shortened by one hour –– it will now be in effect from 10pm to 5am each day, with businesses allowed to operate until 8pm.

He said starting July 1, gyms, spas and outdoor group exercise will be permitted while public parks and beaches on New Providence, Paradise Island, Grand Bahama and Bimini will reopen on June 29. “Gatherings greater than five people are prohibited,” he added with regard to those spaces.

Dr Minnis said while PCR COVID-19 negative tests will be required for people entering the country, an exception will be made for short-term travel periods of 72 hours or less involving Bahamians and residents, though such people may have be quarantined for 14 days on arrival as determined by the Ministry of Health.

“Indoor eating at restaurants will be allowed with physical distancing required, sanitisation, and mask wearing by all staff at all times, and patrons when entering and exiting the establishment,” Dr Minnis said. “Maximum seating will be based on 50 percent occupancy, meaning 30 square feet per person. Vendors at Arawak Cay may continue outdoor dining, but are not permitted for indoor dining at this time.”

Dr Minnis said funeral services or weddings in churches or religious facilities can be held in accordance with physical distancing protocols for Saturday and Sunday services while graveside services are still limited to 30 people.

He said establishments, taxi and bus owners will be held response for letting people in without masks and for ensuring that physical distancing takes place.

If the requirements are not followed, Dr Minnis said the owner will face a fine or possible prison time.

Emphasising the importance of masks, Dr Minnis said: “The COVID-19 pandemic is not over. There is no vaccine as yet. The wearing of facial masks is absolutely necessity and has significantly helped to reduce the spread of the virus at home and around the world. We must all do our part and be personally responsible by wearing our masks, maintaining physical distance and washing and sanitising our hands thoroughly and often.”

Dr Minnis also blasted official opposition leader Philip “Brave” Davis, accusing him of poor judgement when he said in March the COVID-19 restrictions applied at the time were an “overreach”.

“The leader of the opposition was dead wrong,” Dr Minnis said. “My government’s decision to act decisively at the time was taken after consultation with health officials. We acted quickly because we saw what was happening in the world and we wanted to get ahead of the deadly virus as quickly as possible.”

In response, Mr Davis said Dr Minnis told an incomplete story. He said the prime minister agreed with his assessment when the pair later met.

“Indoor eating at restaurants will be allowed with physical distancing required, sanitisation, and mask wearing by all staff at all times, and patrons when entering and exiting the establishment,” Dr Minnis said.

From a purely common sense perspective this recommendation makes no sense. A person cannot put a fork in their mouth with a mask on. If infected they will spill the virus into the air in a closed environment. This increases the potential for others to be exposed as the virus, which can be airborne for up to three hours, circulates with AC in the establishment (this is now common knowledge).

It makes more sense to move to outdoors where the breeze can carry away anything that is exhaled. Only outdoor dining should be allowed at this time with adequate spacing between patrons and when school re-opens classes should be outdoors under open tents for the same reason.

I am convinced the government has to outsource management of this problem to foreign consultants because our leaders can't think.

They already have the foreign consultants, They are just following a script. If you look at your phone news feed you will see the same rhetoric in other countries.

Phase Five of his reopening plan.

His? Did he invent this plan? How come the poster board in newspapers around the world show the same powepoint 5 stage banner with the same color scheme.?

Gee they could not even change the font!!!!

"Now, Bahave" Minnis says, or get spanked by me! This lout has become so drunk on power he's now a certifiable maniac. And after unnecessarily destroying many small and medium size enterprises that are dependent on local patrons for business as opposed to tourists, he has the temerity to say:

“The COVID-19 pandemic is not over. There is no vaccine as yet."

This is Minnis's way of saying he plans to keep us stripped of our basic constitutional rights and civil liberties for as long as he alone, as the supreme ruler, thinks fit.

It astounds me whenever I hear Minnis try take credit for shutting down our borders to international travel. Truth be told there was no international travel for Minnis to shutdown because most countries, like the US and Canada, had already closed their borders. In fact, Minnis's arm had to be twisted to get him to stop visitors from Communist China coming our way because he apparently feared a major fallout in our country's relations with the Chinese Communist Party.

Now, after all that his cocamamie orders have put us through over the past 3 months, Minnis foolishly decides to re-open our borders to travel to and from the US at a time when most states, including Florida, especially in the South Florida area, are experiencing serious surges in Covid-19 cases and related hospitalisations. Go figure!

Only after Mr. Minnis's spoke HIS wrong of Her Majesty's official opposition did the comrade opposition leader did stood to object. How the ever, all else was well said by Mr.Minnis with no object by the official opposition to the loud and thunderous background the desk poinding by HIS Mr. Minnis's puppets House Speaker and red coats House MP's. Nod Once for Yeah, Twice for No?

Could someone point me to where Minnis says in the article "Now Behave" Or is the Tribune just going after a headline to attract readers?

Perhaps if some of us put politics aside we will see that The prime minister is looking out for the safety of the nation....Nassau is the only island that has a huge number of COVID cases. Perhaps Nassau is at fault for causing other islands not to open... perhaps... we have 8 cases, and our people are behaving in for the most part, but we are still listed along with the capitol.. something is wrong with that.

Ma comrade, what makes you hold onto Mr. Minnis is not just spinning his BS?

Well I keep my mind on the global world forecast, I watch Al Jazeera, Channel 404 on the cable... on it all of the world struggles are showcased there. We are fortunate...very fortunate compared to other small nations. But we always do what Bahamians do best, complain...

The 14 new cases were all imported from the United States on arriving flights."