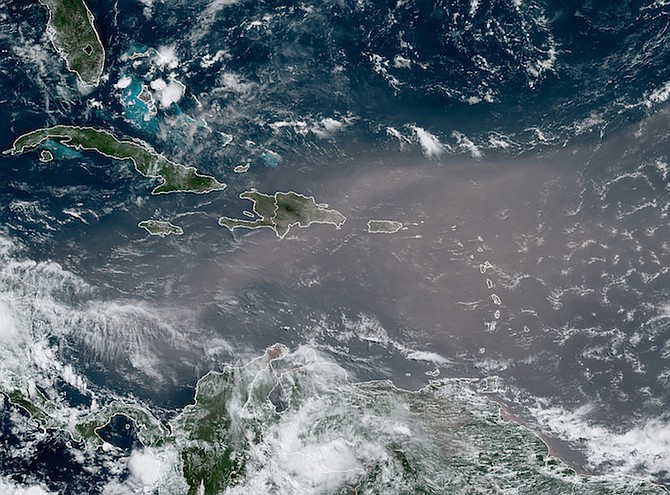 This satellite photo from Monday, provided by the National Oceanic and Atmospheric Administration, NOAA, shows a cloud of dust coming from the Sahara desert. (NOAA via AP)

MASK wearing as well as taking other precautions is recommended for those with allergies and respiratory illness as a plume of Sahara dust is predicated to impact some parts of the Bahamas this week.

Known as the Saharan Air Layer (SAL), a vast cloud of the dust was reported earlier this week to reach parts of the Caribbean. The Weather Channel stated the plume is noted for its thickness over the Caribbean Sea.

Michael Stubbs, chief climatological officer at the Bahamas Department of Meteorology, told The Tribune the plume was expected to impact southern Bahamas yesterday and will appear in Nassau and the northern Bahamas at least by today.

He assured the public that this is not unusual and happens around this time but the denseness presents a challenge.

Mr Stubbs said: “Because it’s a large plume of dust, in fact it’s one of the most dense plumes of dust seen here in decades…it may bring about some health hazards as far as respiratory concerns.”

People with asthma or other breathing issues should take precautions, he said, like wearing masks outdoors.

“….The masks will also assist with the dust. So persons are being asked to wear masks as much as possible for the next two days to minimise the impact or the influence of the dust on their respiratory system, so the mask is pretty good.”

According to the chief climatological officer, the dust minimises the occurrence of typical cyclones because it helps to absorb a lot of the vapour out of the system and is counter-productive to the formation of cyclones.

Covid-19 and masks and now Saharan dust and masks. If only wearing a mask could save us from Minnis too.