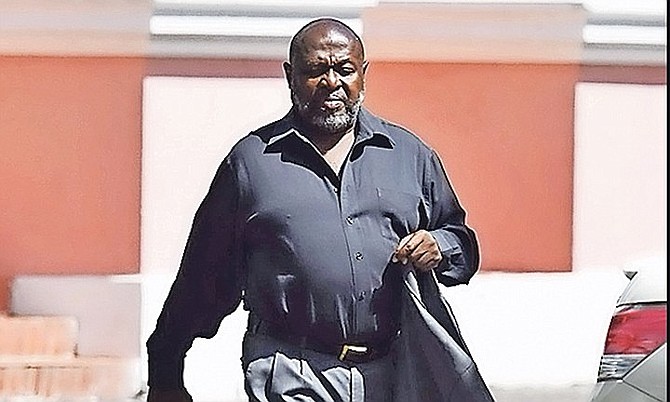 A CHIEF immigration officer who was accused of raping a Jamaican woman while she was in his exclusive custody in 2014, yesterday insisted that he is not a rapist and would not sleep with a woman without her consent.

Norman Bastian was accused of sexually assaulting Claudia Edwards Bethel on December 15, 2014. At the time, it was reported that he took her to his home and forced her to have sexual intercourse with him. Mrs Bethel previously waived her anonymity in an interview with The Tribune last year.

Mrs Bethel launched a civil suit against the government after her rape case was tossed out of court years ago. Mr Bastian was never convicted of the offence.

During a cross-examination by Mrs Bethel’s attorney, Fred Smith, QC, before Justice Indra Charles yesterday, Mr Bastian maintained his innocence and said he did not make up stories to cover up the charge brought against him, because he was “bigger than that.”

Yesterday, Mr Smith read a statement given by Marsha Curry, the woman Bastian said he used to satisfy the Department of Immigration’s policy when it came to dealing with female detainees. Mr Smith noted that in her statement, Ms Curry told officers that she “called her best friend” Mr Bastian, who told her he needed her to go to the Detention Centre and wanted her to ride with him. According to Mr Smith, Ms Curry told the officers that she had assumed Mr Bastian had work to do there since he was a senior officer. Still, Mr Smith noted that in her statement, Ms Curry, who is now deceased, implied that Mr Bastian did not tell her “the most important reason” why he wanted her to accompany him that evening. In response, Mr Bastian insisted that he told Ms Curry what he “needed her for.” He also stated that he couldn’t control what Ms Curry told the police in her statement.

Mr Smith then asked Mr Bastian what time he arrived at the Department of Immigration on the evening in question. After Mr Bastian told him that he arrived after 5pm, Mr Smith accused him of repeatedly changing the “important facts and issues” of his story and claimed that the last time the immigration officer gave evidence, he was “quite adamant” that he arrived at the office after 4pm. Mr Smith then referenced a statement by Devon Adderley, who worked as a security officer for the department at the time. He said that in his statement, Mr Adderley told officers that he found it strange that Mr Bastian had no female officers with him when he brought Mrs Bethel to the office. He said at the time, Mr Adderley also told officers he saw Mr Bastian and Mrs Bethel walk to the officer’s truck around 7pm and said he thought it was unusual to see them together at that hour.

“You formed a plan because you suspected her of being a weak, vulnerable immigrant you regarded as a sex worker (so that you could) throw away all protocol, including trying to get her drunk, take her to your home, and rape her repeatedly?” Mr Smith asked.

“No sir,” Mr Bastian replied before stating that that night, after leaving the Department of Immigration, they stopped at a liquor store before going to Starbucks and then riding in the San Souci area. He said after that, they went back to Starbucks, then Claridge Road before heading to his residence. When asked if he told officers he thought it was okay to socialise with Mrs Bethel since she did not breach the law, Mr Bastian said that he didn’t suspect that Mrs Bethel committed an offence at the time and claimed “she was the one who needed the ride.” He also said that he told Mrs Bethel he had other errands to run and added that she had told him that she didn’t want to go home.

Mr Smith then referenced a statement made by Police Corporal 3053 Gia Richardson-Butler. He claimed that Cpl Richardson-Butler said that she was concerned about Mrs Bethel’s welfare because of the way she looked when she saw the pair. Mr Smith said the corporal reported that Mr Bastian told her Mrs Bethel was under arrest. In response, Mr Bastian called the officer’s statement an “outright lie” and claimed she was in “cahoots” with Mrs Bethel. “That’s fabricated,” he said. “She don’t know me and she has a duty. If she suspected a woman was in danger why didn’t she arrest me?”

Mr Smith then asked Mr Bastian if he fed Mrs Bethel at his home and why he didn’t allow her to use her phone at his house. In response, the immigration officer said that he could not recall whether he or his brother gave Mrs Bethel food, but he knew for a fact she was fed stew fish. He added that Mrs Bethel was using her phone before they arrived at his house and further claimed that she had called someone to let them know that she was okay. Mr Bastian also said that Mrs Bethel told him that her phone had died so he asked his brother to find a charger for her. He insisted that at no point did he “restrict her from making calls.”

Mr Smith also cross-examined Byron Brown during the hearing. He was an upholster that Mr Bastian and Mrs Bethel visited that evening while the immigration officer was running errands. In his statement, Mr Brown told police Mrs Bethel appeared “happy” while she and Mr Bastian were at his shop. When asked to elaborate on his claim yesterday, he told the court that when the pair were at his store they talked about a lot of things and Mrs Bethel laughed.

During the hearing, Mr Smith also asked Mr Bastian whether the claims he “made up” after Mrs Bethel was in custody required him to keep her in custody from Saturday to Tuesday afternoon. In response, Mr Bastian told Mr Smith that it wasn’t his decision, but the director of immigration’s (DOI) own. He also asserted that he conducted the interview with Mrs Bethel to “ascertain stuff” from her as directed by the DOI.

Mr Smith then accused Mr Bastian of regarding Mrs Bethel as a “whore Jamaican migrant” and argued that Mr Bastian “flippantly decided to treat her like she had no rights.” Mr Bastian denied the accusations and insisted Mrs Bethel’s “freedom was never taken from her.”

“I put it to you that you took Bethel to the Immigration Department to speak to her without anybody around so she could feel further isolated, so that you could more easily pressure her to stay in your company,” Mr Smith said. “(You) kept her in an anxious and scared environment so you could have sex with her… you thought she was a sex worker you could exploit.”

Mr Smith furthered: “You found her in a group of vulnerable women who had been arrested and deported, you know women on spousal permits are uneasy about their status in The Bahamas.

“...You in fact did most of the lying, not all the other people who gave statements different from your evidence,” he insisted.

After denying all of Mr Smith’s accusations, Mr Bastian claimed that Ms Curry had omitted some information in her statement and argued that Cpl Richardson-Butler was “telling lies.” He insisted if the female officer believed Mrs Bethel’s life was in danger, “she had a right to take her” from him.

When asked if he was a “rapist” who abused Mrs Bethel by raping her on two occasions and forcing her to have oral sex, he stated: “I am not a rapist. I would not make up stories. I’m bigger than that and would not sleep with a woman without consent.”