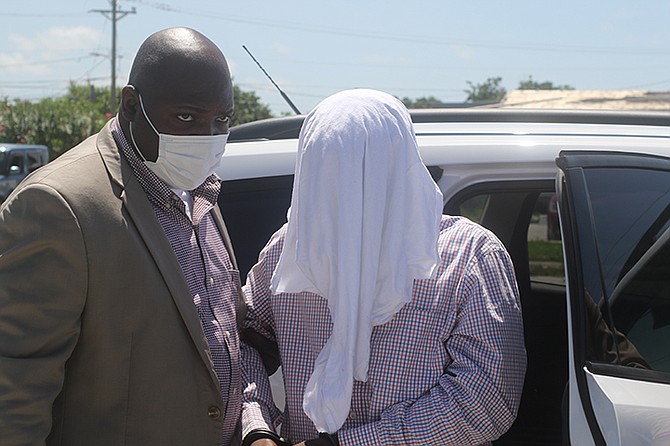 A 16-year-old Bahamian boy was charged with killing a 79-year-old Haitian woman yesterday.

A small crowd gathered outside the courthouse in Jones Town, Eight Mile Rock, as the minor was brought and escorted by officers at about 11am, with a towel over his head.

Magistrate Gwen Claude allowed only the minor’s parents and his attorney Keith Seymour to be permitted inside the courtroom for the proceedings. Neither the press nor any of the victim’s family members were allowed inside.

Reporters were only able to enter the court after the proceedings to be given information from Police Prosecutor 2628 Sergeant Garth McIntosh.

According to the docket, it is alleged that sometime between Friday June 19 and Saturday June 20, the accused by means of unlawful harm intentionally caused the death of Elisia Theoc, of Pinedale, Eight Mile Rock.

Theoc had been reported missing by family members after she did not return home Friday evening. Her body was later discovered Saturday morning in bushes in Pinedale. Her death is the eighth homicide in Grand Bahama, according to Tribune records.

In addition to the murder charge, the juvenile was also charged with housebreaking. It is alleged that on the same date, the accused broke into the home of Keisha Coverley, of Martin Town, Eight Mile Rock and stole a television, Android box, and a black LG DVD player, altogether valued at $400.

All the items were recovered by the police.

The matters were adjourned to August 4, to be heard before a juvenile panel.

Also charged with receiving was a 17-year-old juvenile. It is alleged that the accused on the same date received the stolen items in question. He was granted $1,500 bail and the magistrate imposed a curfew on him. The matter was adjourned to August 4, to be heard before a juvenile panel.