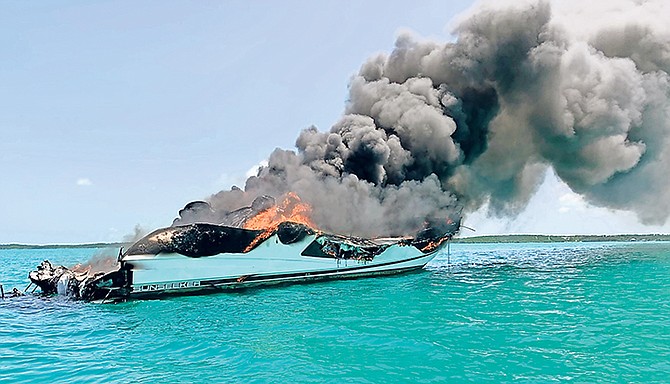 POLICE are investigating the circumstances surrounding a boat fire near Valentines Resort and Marina in Harbour Island on Saturday.

A party of five was on board the boat when it became engulfed in flames, however no one was injured, police said.

According to reports, a 66ft fiberglass Sunseeker motor vessel called Vanish was docked at the marina when it caught fire around 12.35pm on Saturday. Officers responded and tried to extinguish the flames but to no avail, police said.

Video footage and pictures showed the blaze consuming the vessel, sending up plumes of dark smoke at the marina. One image showed onlookers watching while efforts were being made to extinguish the blaze. The boat is thought to have been worth in excess of $500,000.

On the ground in Harbour Island, Assistant Commissioner Solomon Cash confirmed to The Tribune yesterday those individuals who were on board the vessel were able to get off the boat and swim to safety. “The fire report came to the attention of the police some time yesterday afternoon. Since the information, we dispatched a team from fire services from New Providence on the island who are currently doing comprehensive investigation,” he said.

“We don’t have any suspicion as to whether it’s arson or not at this time……The boat was completely destroyed by fire and it’s submerged in the water.”

Last October, a gas station on the island erupted in flames and at least two buildings were destroyed in the blaze.