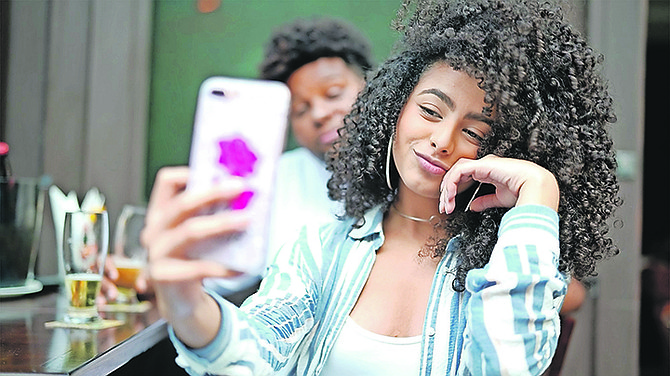 It comes as no surprise that online dating activity has seen a massive surge since the COVID-19 pandemic forced countries to lock down public life and order its citizens to stay at home.

To overcome the loneliness felt by so many around the globe felt, or just to pass the time, people took to their electronic devices in hopes of making a connection with another person or persons.

According to CNBC, the website Dating.com reported that global online dating was up 82 percent during early March. And as states across the US began putting stay-at-home orders in place, the social app Bumble saw a 26 percent increase in the number of messages sent on its platform, a company spokesperson told CNBC. Meanwhile, Tinder saw the length of conversations increase by 10 to 13 percent, and the elite dating app Inner Circle saw messages rise 116 percent over that same time period.

Though online dating has been popular around the world for a while now, here in the Bahamas it has never taken off to the same degree. However, COVID-19 has certainly made it more appealing. As social distancing practices remain in place, many Bahamian women feel online dating might be the safer option as it does not carry the health risks of an in-person encounter.

Tribune Woman spoke to several local women about their experiences with dating online.

Jessica* said it has been her go-to method of meeting people during the lockdown period.

“I have gotten to know individuals on a personal level more than I feel I would have if we had met in a social setting. This pandemic has definitely affected the way we will interact with persons moving forward as we have to be more cautious as to who we are exposing our physical bodies to,” she said.

And things turned out very good for Jessica when it came to most of her virtual dates, and she may have even met her potential future partner.

“I have met some lovely persons, which turned in friendship, more so than anything intimate...also, I have narrowed it down to a person who has lots of potential. We will actually be meeting in real life this week as restaurants are allowed to be open again,” she said.

As for the advice she would give to women seeking to the find connections through online dating, she said: “As with all things, you should be clear on your wants and communicate them clearly. If you know you’re only interested in having flings, express that, and vice versa if you are looking for serious commitment. There’s someone for everyone, so let’s not waste each other’s time with dishonesty and misrepresentation.”

During the second weekend of April, Match.com asked members several questions about how their courtship habits changed since the world shut down. Exactly 6,004 men and women replied. And they were doing something new: video chatting.

Before COVID-19, only six percent of these singles were using the video chat function. Now, 69 percent were open to video chatting with a potential partner, and a third already had an individual with whom they wanted to talk via video.

Rochelle from Nassau said she met a man who instant messaged her through social media, and while they chatted for hours, she was never comfortable having a video conversation with him.

“We would actually be on video chat but I would place the phone down and talk or have the phone’s camera positioned elsewhere, not on me. I guess maybe because my hair was not fixed at all through quarantine I wasn’t too enthused about a new person seeing me,” she said.

As to how things turned out between her and her quarantine acquaintance, she said: “He sent me a message to end our courtship. He felt as though he could not meet my needs.”

Stacy also dipped her toe in the online dating pool, but she said it’s not an ideal scenario for her.

“For me, I am not a texter. I don’t really like being on the phone for long. I do, however, thrive with in-person conversations. I feel like you cover a lot of ground and get a feel of who a person really is,” she said.

“However I will have to conform to other methods of meeting people and communicating because I do not want to meet up with someone in-person, get COVID-19, and the person turns out not even be worth the risk.”

Meanwhile, Anthonique believes people should put all dating on hold for now.

“I don’t think people should even bother dating right now. I honestly don’t think this is the time for that, because once you have connected with someone online you will eventually want to have an in-person encounter, and does it make sense to be meeting up with people at a time like this?”

“I would just recommend people take the time to improve themselves and even revamp their lives during this time, not date,” she said.

• Names have been changed