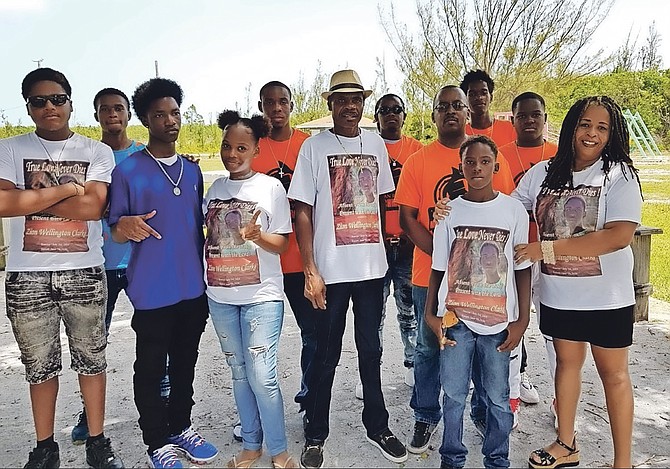 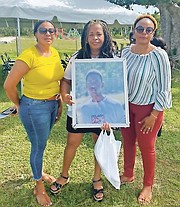 FAMILY and friends gathered at the Fox Town Park in Abaco on Saturday for a memorial service for 16-year-old Zion Clarke, who was tragically killed in a traffic accident on that island about two weeks ago.

Edith Clarke, the boy’s mother, said the service was emotional for everyone who attended.

A memorial cross - sponsored by Abaco resident Bernardo Rolle - was also erected at the spot marking where Zion lost his life on June 7. The teen was walking home from the park after playing basketball shortly after 10pm on the S C Highway in Fox Town when he was struck by a motorist. His body was found in bushes some eight feet from the point of impact.

“I tried to hold it together, but these children were crowded around his cross, about 15 of them, and they were crying; that touched me, and I broke down,” said Ms Clarke.

She said that the priest, who only knew Zion for the short time he lived in Abaco, also became emotional during the memorial.

Members of the Urban Renewal Marching Band in Grand Bahama also travelled to Abaco to perform tributes to Zion, who was a member of the band when he lived on that island before relocating to Abaco a year ago.

“It was all very touching, but painful, and I am grateful to the Urban Renewal Marching Band and persons who traveled from Grand Bahama to be here for him and for us - it meant a lot to me,” Ms Clarke said.

However, she did express her disappointment with the area MP who has not yet reached out to her since the accident.

She noted that the only MP that has reached out to her is Pakesia Parker-Edgecombe, the MP for West Grand Bahama and Bimini.

According to Ms Clarke, Ms Parker-Edgecombe was able to assist her the night of accident, and more recently in getting her son’s body airlifted to New Providence prior to the memorial service.

“My son’s body was here in Abaco for two weeks after his death and I had to call her and ask her to push for his body to get off the island. So it is like no one is checking for Abaco.

“I told Ms Edgecombe that it’s been two weeks; she told me she would call somebody and right after that the following day his body was airlifted to New Providence on Friday – a day before the memorial on Saturday,” Ms Clarke said.

The boy’s funeral will be held on July 4 in Grand Bahama, where Zion will be laid to rest.

Ms Clarke also complained about the ongoing neglect in Abaco, which was devastated by Hurricane Dorian last September. “I don’t understand what is going on, it’s like Abaco is off the map. (We) have no access to 911, no 919, and I see no reason why these calls cannot be transferred.”

She stressed that the conditions - including the lack of sufficient streetlights among other things - at the SC Bootle Highway are unacceptable.

“Every year we pay taxes, we pay for car license and insurance. When I got my license to drive I was given a book saying that certain infrastructure should be on my street to protect the pedestrian and the driver, and none of that exists here.

“All of this is so upsetting to me; (there are) no speed bumps, no ripples, no slow down sign, no light, and no school zone sign in the school zone.

“In Freeport, there are so many speed dumps, and also in Nassau around the schools; why do they have this island so wide open? Why are we paying these fees if we ain’t going to have protective measures put in place for protection and security we need on our streets?” Ms Clarke said.

She hopes that her son’s death can highlight the ongoing issues and bring some awareness and action from the powers that be to address them.