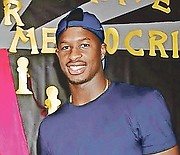 TRAVIS Munnings was the latest Bahamian senior men’s national team member to capitalise on his free agency when he signed with a new club in a new country.

Munnings will join Oliveirense Basquetebol of the Portugese Basketball League - the top tier league in the country.

Oliveirense is the two time defending champion. Munnings will join their quest for a third consecutive title after last season was cancelled due to the COVID-19 pandemic.

“The importance of this signing is to better position myself in this sport so that I will be able to continuously grow year after year. My goals are to give the team 100 per cent effort every day, be a prominent player, build sustainable relationships with colleagues (teammates and coaches), entertain viewers, and of course win the 2021 championship,” Munnings said. “I expect to set the highest records in this league. My expectations are very simple, make everyone remember Travis Munnings as one of the hardest players. I know and understand that Oliveirense Basquetebol has a great coaching staff as well, hungry players that are skilled on many levels. I also know that the support from the community is a huge factor in the team’s success and you have to appreciate such gems like that.”

He spent the offseason training alongside Kings guard Buddy Hield and hopes to bring his unique playing style and personality to Portugal.

“I am a tough, versatile and physically adaptive person that is skilled in playing an open floor style, shooting three-pointers efficiently and aggressively getting to the basket. Additionally, I think my endurance is something that helps throughout the full lengths of practices and games. I am a God-fearing, selfless, optimistic person and player that enjoys guiding and challenging others to be the best. Last but not least, I am highly competitive so I play to win.”

Munnings concluded last season with La Rochelle Stade Rochelais of France’s NM1 League. He averaged 17.5 points, eight rebounds and 3.8 assists per game through six games. In his debut with the team, he finished with 24 points on 10-15 shooting from the field, 4-6 from three-point range and added five rebounds in a 55-44 win over Stade De Vanves.

Munnings originally signed with ADA Blois Basket 41 of the France - ProB League - the 2nd tier division - in July, but was released at the end of the preseason in September before he played a single game.

Prior to the 2019 NBA Draft, he was invited to pre-draft workouts with the Charlotte Hornets, Brooklyn Nets and Minnesota Timberwolves before eventually going undrafted.

He concluded his four-year collegiate career with the Louisiana-Monroe Warhawks and reached several milestones.

As a senior, he averaged 14 points, 7.5 rebounds and 2.4 assists per game on 44 per cent shooting from the field and 36 per cent from three-point range.