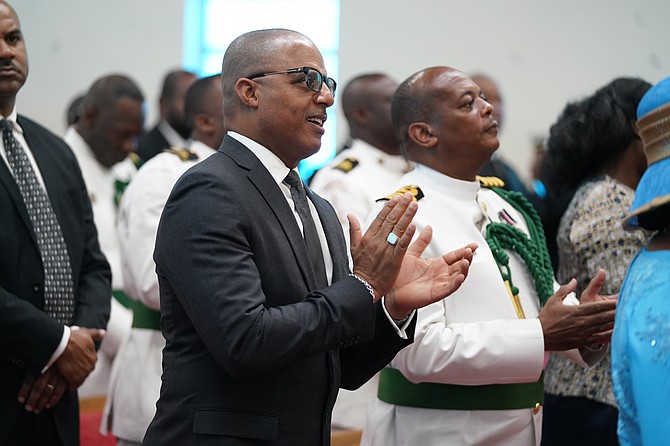 NATIONAL Security Minister Marvin Dames yesterday said his ministry is working towards increasing the number of Royal Bahamas Defence Force (RBDF) officers to at least 2,000 by the year 2022.

Speaking at the RBDF’s annual church service yesterday, the minister told officers the government recognises the force’s need for additional “human capital” to effectively carry out their duties.

“Acting commander of the defence force, officers and marines, your organisation has grown from 47 members in its embryonic stages in the late 1970s, to 250 shortly after becoming an official entity by an act of Parliament in 1980, to today standing at just over 1,500 strong,” he said.

“The force is earmarked for continued growth and an intake of 120 recruits are expected to enlist within the ensuing weeks.

“Your force compliment is performing exemplary, but we are aware of your demand for additional human capital required to adequately achieve your mandate. Therefore, we are supportive of your needs to increase your force’s strength to at least 2,000 by the year 2022.”

Mr Dames said the government is also committed to ensuring that “succession planning is in place for the next generation of officers and marines.”

“In terms of maritime interdiction operations, officers and marines spent 1,513 days at sea and conducted 801 boardings and it continues,” he furthered.

“Through joint operations with national and regional partners, there was an increase in migrant arrests by 33 percent. Illicit drug arrests surpassed 2018 figures by some 50 percent. Illegal firearms arrests increased by some 92 percent and ammunition confiscation increased by some 14 percent, compared to the statistics in 2018.”

Officers were also commended for their relief efforts in Abaco and Grand Bahamas since the passage of Hurricane Dorian last September.

“I am reliably informed that some five months after the passage of the storm over 100 of your men and women remain deployed in Abaco and more than 30 in Grand Bahama and are projected to continue their deployment until adequate recovery and security stability are achieved in both places.”

Mr Dames said the government has pledged to do whatever is “necessary” to ensure the RBDF is equipped with the tools and manpower needed to “cushion natural disasters”.

He also announced that the force is transitioning into a “new era of modernisation to address current threats” and encouraged officers to embrace the shift.

“The security of the southern border of the Bahamas remains a top priority for our government as it understandably creates a choke point in enforcement efforts,” he said.

“Towards this end, in April of 2019 the country’s first long-range radar was installed and commissioned.

“...This is a necessary component in the fight against illicit activities, extends the force’s literal line of sight and allows patrol vessels to concentrate their efforts on deep water quadrants.”

Mr Dames explained that the radar improves the RBDF’s maritime domain awareness at a “strategic location” in the country.

He added that a second radar will be erected in Nassau “within several months” and revealed that officials are currently discussing plans for a third and fourth radar system.

According to the minister, acting RBDF Commander Raymond King and his team are also “working on promotions” for members of the force.

“It is hoped that very shortly you will have a promotional exercise,” he told officers.

“And to those petty officers and below, a promise that we made as a government since coming into office that we will extend your years and give you an additional five years of service.

“I want to just tell you at this point, that the Cabinet would have approved that amendment to the legislation and I hope to lay that shortly before the honourable House of Assembly.”

Insisting the country was grateful for the RBDF’s service, he encouraged officers to continue working diligently.

He also applauded officers for their search and rescue efforts, disaster relief operations and for providing security assistance to more than 20 government and non-government agencies.

recruiting to do what? What do they do? why do we need 500 more people on the defense force? that is 500 more salaries, benefits and pension plans for our debt. do they prevent illegals from entering the Bahamas? what do they do to justify hiring this many people?

... its a great pre-election move to secure votes and a way to reduce unemployment numbers on the taxpayers dime!

They will be ready when government pushes the populous too far and needs to have its soldiers keep the population at bay.

500 more from an failed education system with a D average for passing, give them a quick training course and access to firearms

'"Through joint operations with national and regional partners, there was an increase with migrant arrests by 33 percent. Illicit drug arrests surpassed 2018 figures by 50 percent. Illegal firearms arrests...."'

'"Through joint operations with national and regional partners, there was an increase with migrant arrests by 33 percent. Illicit drug arrests surpassed 2018 figures by 50 percent. Illegal firearms arrests...."'

Clearly the broadcasting of "migrants arrests" seems to be the very soft govt policy of the continuing the endless cycle of human trafficking. This terrible human crime is ILLEGAL these are not migrants arrested..they are ILLEGAL MIGRANTS BREAKING THE CLEARLY OUTLINED LAWS OF THE COMMONWEALTH OF THE BAHAMAS.....these persons must be clearly informed that they have broken the laws of this sovereign nation !!!!

We all know what's going on here.....Socialist 'Candy Man' Minnis robbing Peter to pay Paul in a desperate effort to buy votes because the economic, national security and social policies of the corrupt and most incompetent Minnis-led FNM government have failed and even oppressed the Bahamian people.

Nothing better than jobs (paycheques) evidence that the comrade Imperialists reds thirst for rungin general election bell - way ahead its 5 year electoral mandate - must be taken seriously by any comrades thinking through how best offer voters a potential and credible opposition alternative to whomever the Imperialists reds musters together to contest as the red party's unfortunate of the 39 or so souls - still be named as general election candidates.The colony's chief executive comrade, may yet select test mood voters by calling a byelection - and two highly potential red shirts 2017 won constituencies and to become the two sacrificial red shirts MP's are pushing at very forefront me mind? The first of 500 of 20,000 promised new paycheques - just 19,500 more to join colony's government's PopuulacesPurse's - done overcrowded payroll? Can' write that if comrade Marvin didn't exist as security minister, you'd would've have wrote him into Imperialists script of characters.Just, can't.

It is obvious that none of you above commenters realize the technical and intricate manpower requirements of a growing naval organization with a military commando component which has a mandate to do the job of other countries Army, Navy, Marines and Air survailance. I am sure the commodore can justify his annual manpower needs assessments for the RBDF which also has a high turnover and early retirements rate and is now required to man expanded bases in Ragged island and Inagua along with expanded assistance to Grand Bahama and Abaco after Dorian.. .

It is not a matter of justification ………. it is a matter of efficiency & effectiveness ……… That is what really concerns most Bahamians with our Police & DF ……. We have almost 6,000 total officers now, with 80% of the population on ONE tiny island and we have too much slackness now. Imagine just having more of the same.

Part of the manpower needed is as the result of the high turnover and early retirement seems to be a problem in the effectiveness of any force. Problem seems to lie in the top not recognizing what is happening. Lots of manhours, training recruits, skills to fill the Force and having to repeatedly do so subtracts from money and training for Force to go even higher on a more stable core.

Agreed Bogart. If the RBDF could have lowered its attrition rate from inception, that organization would have easily exceeded the 5000 personnel figure today.

10th May, 1980 coming up soon, anniversary date, a most sad day in the history of the nation when the Bahamas Defence Force boat Flamingo was visciously attacked by the wicked evil Communist Cuba Migs Air attack planes entering illegally into sovereign Bahamian territory and attacking RBDF Flamingo boat. And then gunning down our brothers swimming to survive in the Bahamian waters.

There must be a National Day of Rememberance for our brothers who died and every officer on board in duty of our protection of our sovereign territory. This must be a National Honour of our brothers and sisters who enlist for our nation.!!! This must have every single citizen and resident give recognition to the officers of the nation protection and defence of our sovereign Bahamas nation. Must be honour, sad but fiercely uplifting speeches for our brothers and sisters. The past slmost quietly ceremony must blossom forth NATIONALLY for this event.!!!

The Flamingo incident caused me to Join the RBDF one year later. I served for five years from 1981.

THANK YOU!!! realityckech242 for your service to the Nation.

if the force is a disgrace now with a few good officers then it will soon be even more so to the tune of another 500. Any provision going to be made for the 30 to 40 years of retirement pay that the government will have to pay them.