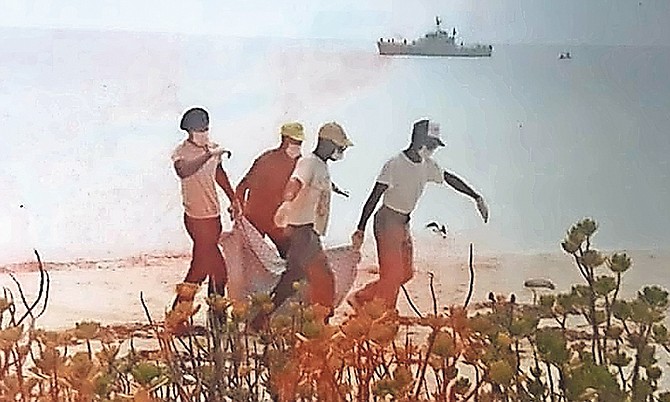 A picture from 1990 – the day when 39 Haitians died when their boat capsized in choppy seas.

The Bahamas and Haiti have a complicated relationship that spans the scope of centuries.

Yet, while both islands share a long history that can be traced all the way back to the Haitian Revolution, in recent times, the link between the two Caribbean nations has been mainly characterised by one issue: illegal migration.

Indeed, it is common to hear news of local immigration officers apprehending illegal migrants hailing mostly from our neighbours in the south.

Still, one maritime operation that is seldom discussed in the country is the interception of a sloop which ended in the death of 39 Haitian nationals three decades ago.

It is a story which has just been retold in a new play - Diary of Souls - by Ian Chinaka Strachan.

On July 10, 1990, 30 men and nine women – desperate for a better way of life – lost their lives when their “unseaworthy vessel” capsized in choppy seas while under tow by the Bahamas Defence Force.

The lost souls were buried in a mass grave on an uninhabited cay one day later.

At the time, The Tribune reported that HMBS Yellow Elder arrived at Staniel Cay to assist HMBS Marlin which had intercepted 209 Haitians in a sloop on July 8 – two days before the tragedy unfolded.

Yellow Elder spotted a second vessel with 106 Haitians on board, but the 108-foot vessel could not get to the Haitian sloop because the water was too shallow.

This forced officers to use an inflatable boat to take a tow line to the Haitian vessel.

An eye witness said that all of the Haitians crowded to one side of the vessel while it was under tow, causing the vessel to capsize.

In all 39 people drowned and 67 others were rescued. The bodies of the dead were retrieved and put in an “inflatable tent-like raft”.

Those who survived were taken on the Yellow Elder and Marlin with the 209 Haitians who were originally apprehended.

There, the men and women were separated and given food and water.

While it is uncertain what prompted the Haitians to crowd to one side of the boat, Defence Force officers believed the migrants were trying to get into the smaller boat, despite the fact that it would have been impossible for all of them to fit.

While it is not clear how long they were at sea, initial reports also indicate that their food supply had run low and they were very hungry.

Those who survived told witnesses that food was rationed on the capsized vessel and the women were given priority. It was also reported that one man was injured in the face when he attempted to get more food.

The majority of the migrants – some barefoot, some shirtless – were visibly weak to onlookers.

On the day of the incident, Fenrick Sturrup, formerly a US Coast Guard cutter, was dispatched from the Defence Force’s Coral Harbour base to assist Yellow Elder and Marlin with their operation.

By the time the 95-foot vessel had arrived at Staniel Cay, the commotion had died down and the lifeless bodies of the Haitian migrants were taken to Bitter Guana Cay –a cay just southward of Staniel, recognised by its “peculiarly shaped white cliff”.

The bodies were laid out on a beach on the cay where they were prepared for burial.

Randy Curtis, an undertaker from New Providence, was taken to the cay to embalm the bodies.

“Some residents from nearby Black Point helped dig a large grave. The embalming and burial started at noon on July 11 and it was not finished until almost sunset,” The Tribune reported.

“Sheets were soaked in buckets of embalming fluid and the bodies were wrapped in the sheets and stacked in the grave.

At the mass burial, a short prayer and scripture was read by a local priest while the first body was lowered into the four-foot deep grave. Nothing else was said until the final body was lowered.

There were no loved ones to identify the deceased or mourn their tragic deaths. There were also no grave stones, as far as it is known.

The incident, which gained international attention, prompted leaders of Miami’s Haitian community to urge the US Government to “help exhume and identify the bodies of the illegal immigrants” who were buried in the mass grave.

There was no response from the Bahamian government.