Face To Face: Harry Potter Had An Owl, I Had My Hawk 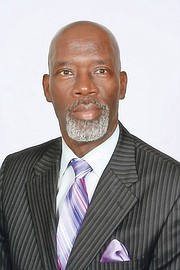 When I was a high school student attending St Augustine’s College (SAC), I met Alpheus “Hawk” Finlayson. He is an alumni and remains active in the lives of some of the students who came after him. I am one of them. From that time until now, he still checks up on me.

During my school days, any time I would win a speech or debate competition, or excel in any sport, a message would come across the PA system: “Felicity Ingraham please report to the front office.” There, I would pick up the phone and he would be on the line with words of encouragement.

Back then as a teenager, I couldn’t understand why he would take the time to call me. It was not until many years later I realised how special it was that he made such a gesture over and over for years while I was in school. When we crossed paths later on, he got my cell phone number and made use of it from time to time, checking up on me and my family. 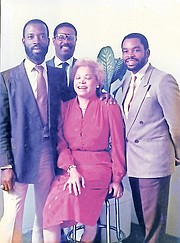 Alpheus “Hawk” Finlayson with his siblings Roosevelt, Spence and Viola. Alpheus is on the left of the photo.

This is a testament of a man who truly cares for others. My story is one that can be reiterated by many, and the fact he has been able to touch so many lives just by showing genuine care and concern for others is an indication of how big his heart truly is. To meet Hawk is to meet a man with dignity. His diction is excellent, his voice is distinctive and he always has something positive to say.

The St Augustine’s Alumni Association honoured him with the 2018 Lighthouse Spotlight Award for his own accomplishments as well as for pouring into so many SACers along the way.

Alpheus was outstanding from birth. He was the apple of his father’s eye because he was born after ten years of marriage. He was born in Nassau in 1947 to Alpheus Alexander Finlayson of Mangrove Cay, Andros, and Diana (nee Deveaux) of Moss Town, Exuma. Diana had three children prior to the marriage, so Alpheus did have siblings. He grew up in the central area of New Providence known as “The Valley”.

During his early years, he attended Sands School with people like Junkanoo icon Percy “Vola” Francis, former Central Bank Governor James Smith and entertainer Ray Munnings. He went on to attend Eastern Junior School in Palmdale. He ran track and field and had schoolmates like former Parliamentarians Leslie Miller and Malcolm Adderley, who were both great 400-metre runners. Alpheus went on to attend SAC where he continued to nurture his passion for running. He graduated in 1966.

He started running with St Bernard’s Club in 1960. His very first race with the club was at the Friends of the Bahamas Track Meet in December 1960, where he ran the 800-metre race, won by Alec Hanna.

“St Bernard’s was on Boyd Road, and the Priest in charge was Father Marcian Peters, called the ‘Sporting Priest’… I purchased my first pair of track shoes from him,” Alpheus recalls.

He also remembers purchasing his very first sweatshirt for running. He bought it from Artie Nottage, who had a shop at the south end of Christ Church Cathedral, Downtown, Nassau. It was a proud moment for him, and he had to decide what name he would put on this shirt.

His running prowess would be defined by this name. Back then, comic books were all the rave. First, he thought of the superhero Flash, but decided against in. Then, he considered Black Hawk.

Hawk found a lot of joy in running. His coach, Charley Wright, had great influence on his life: “Whenever I came home from club meetings, I would tell mama, ‘Coach said do this or don’t do that!’ Mama said, ‘Who is this man anyway?’ I understood the persuasion coach has over athletes.”

That may be a skill he picked up along the way because in his latter years, he had a way of persuading young people into doing positive things and making the best of themselves. He also set a good example for others to follow. After SAC, he went on to attend St John’s University in Minnesota, where he obtained a Bachelor of Arts degree in mathematics.

He is a financial services representative for Colina Insurance and is lauded as a “tried and trusted” professional in the industry. Also known as “Policy Man”, Alpheus has delivered stellar service to numerous clients in the Life and Health Insurance industry since November of 1980, when he began his insurance career with Imperial Life Assurance. He first qualified for the industry’s prestigious Million Dollar Round Table in 1982 and subsequently qualified five consecutive times, making him a life member. He once served as Vice President of the Life Underwriters Association of The Bahamas. Ambassador A Missouri Sherman-Peter, Permanent Observer of the Caribbean Community of the United Nations recalls the days when “Policy Man” would frequent her neighbourhood.

“He always took the time to speak to each client about family life in general” she said.

“As my contemporary representative, Alpheus kept an enthusiastic interest in his client, always encouraging me to re-imagine my insurance and financial needs and providing sound advice on options, from term insurance to retirement planning, to securing and protecting myself, my family and my assets.”

Alpheus and his wife, Dawn.

Dr Judson Eneas shared: “When I returned home from university in 1986, Alpheus invited me to speak at the West Nassau Rotary Club. He immediately approached me as he knew I was ready to begin a medical practice here in The Bahamas. Upon arrival, I was already married and had three young children. Over the years, I have educated all three children, developed a medical practice and built my dream home. Throughout all this, Alpheus Finlayson had been my insurance agent and has ensured I have been adequately insured throughout all phases of my development. I have enjoyed a beneficial relationship with him.”

Alpheus’ love for Rotary began in 1982. He is a past president of the West Nassau Club, and he received the Paul Harris Fellowship in 1994 for his service to Rotary. He now bears the distinction of an honorary Rotarian.

He had a euphoric year as Bahamas Amateur Athletic Association (BAAA) president in 1992, when the first Bahamian Olympic medal in track and field was won. That year, triple jumper Frank Rutherford captured a bronze in Barcelona, Spain. Alpheus also presided over the organisation in 1995 and 1997 when the first three World Championship medals were won.

Alpheus made history when he became the first Bahamian elected to the 27-member Council of the IAAF, the World governing body of track & field. He also bears the distinction of being the only Bahamian to attend every IAAF World Championship, from Helsinki in 1983 to London in 2017. He is a Director of Marathon Bahamas and of the Bahamas Athletic Foundation. He bears the honor of being a National Sports Hall of Fame inductee.

His book From Vancouver to Athens: Finlayson Fifty Years of Bahamian International Track & Field Competition is a best-seller. Alpheus has also authored weekly columns on “Track World” from 1980 to 1986 in The Tribune. He produced a television show on ZNS called Track World with Alpheus Finlayson and has written international newsletters with the same name. Since February of 2013, he has hosted the weekly radio show Track World with Alpheus Finlayson on Guardian Radio 96.9 FM. This weekly radio show is one of the few in the world dedicated to track and field.

Pioneering is a part of Alpheus’ make up. In addition to being a leader in his profession and in his beloved sport, he is a founding member of the local chapter of Sigma Pi Phi Fraternity, the first black Greek letter fraternity founded in 1904 in Philadelphia, USA. For his community building activities, Alpheus has received many accolades, including the RE Cooper Meritorious Award and the Kingdor National Parkinson Foundation Award.

He puts just as much gusto into his family as he does every other aspect of his life. He is married to Dawn Finlayson (nee Rolle). They have one daughter, Alexis Hanna; three granddaughters, two grandsons, and two great-granddaughters. His family worships at St George’s Anglican Church back in his stomping ground in the Valley. He is proud of his elder siblings Roosevelt, a management consultant; Spence, a motivational speaker and author; and Viola Adderley-Wimbish, who has resided in Connecticut since 1948.