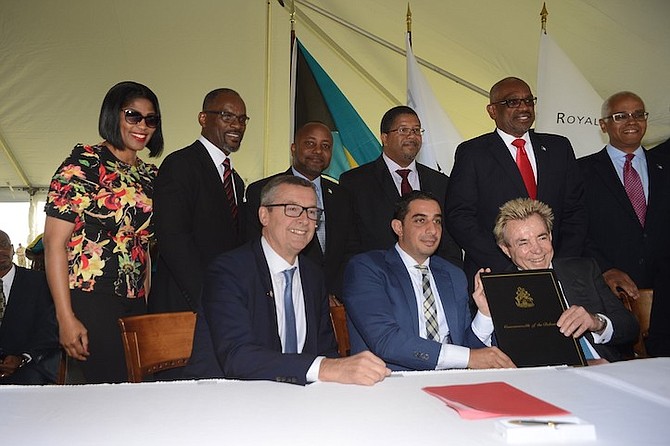 Grand Bahama is poised for a near six-fold increase in visitor arrivals from two projects that will be “the catalyst for tourism’s rebirth” on that island, a Cabinet minister revealed yesterday.

Dionisio D’Aguilar, minister of tourism and aviation, told Tribune Business that Carnival’s cruise port will combine with the ITM Group/Royal Caribbean redevelopment of the Grand Lucayan and Freeport Harbour to bring an extra 3.5m tourists to Grand Bahama annually once both become fully operational.

Hailing yesterday’s agreement signing with Holistica, the ITM Group and Royal Caribbean joint venture, as “monumental” and “transformational” for both the island’s tourism industry and wider economy, Mr D’Aguilar said it would restore confidence in Grand Bahama and spur further Bahamian and foreign investment.

He argued that the deal’s closing also justified the government’s much-criticised move to purchase the Grand Lucayan in September 2018 as “absolutely the right decision”, with the benefits generated from 3,000 new jobs and increased economic activity set to more than outweigh the cost to Bahamian taxpayers from the initial $65m investment.

The government will receive a net $50m from the resort’s sale due to the $15m credit Holistica will receive out of the Dorian insurance recovery, while the more than $30m it has spent to subsidise the Grand Lucayan’s operating losses during 18 months of ownership has taken the taxpayer’s total outlay on the deal to at least around $95m.

Mr D’Aguilar, though, hit back at the government’s political opponents and other critics of its ownership by suggesting that yesterday’s developments showed “we were right, and they were wrong”, not to let the Grand Lucayan become another Royal Oasis.

He admitted, though, that Grand Bahama International Airport’s redevelopment is “a must” if both the Carnival and ITM/Royal Caribbean projects are to succeed. The minister revealed that the Government was waiting on its current owners, Hutchison Port Holdings and the Grand Bahama Port Authority (GBPA), to decide their next steps and added of the former: “The ball is in their court.”

“This property has largely been left to drift with no clear vision for the way forward. Today, the vision has been established. Holistica has purchased the property, and agreed to invest hundreds of millions of dollars in two phases. It’s $300m on the redevelopment of the hotel and creation of a water park, and the construction of a new cruise port with attractions down in Freeport Harbour.”

Mr D’Aguilar added that the Royal Caribbean/ITM Group joint venture is aiming to bring an extra 2.5m visitors to Grand Bahama annually via a mix of cruise and air transportation. When combined with the one million additional passengers expected to visit Carnival’s Grand Port, he said this would generate a near six-fold boost to the island’s yearly arrivals.

“Grand Bahama currently has 600,000 coming here, which is going to go down with Hurricane Dorian,” Mr D’Aguilar told Tribune Business. “You couple this [ITM/Royal Caribbean] with the Carnival project, which is another one million passengers, and you’re adding 3.5m to 600,000.

“These two transactions, these projects the Government has approved, really are the catalyst for the rebirth of tourism in Grand Bahama. It’s going to take time, going to take a lot of work, but now we’re hopeful and optimistic. It will replace a lot of the ‘hoo-ha’ now that we have some clear plan to move forward.”

He added that yesterday’s outcome, which involved signing the Grand Lucayan sales documentation as well as the overall Heads of Agreement, more than justified the Government’s much-attacked move to commit $65m of taxpayer funds to paying the full purchase demanded by Hutchison Whampoa for the hotel’s acquisition.

“I think it was absolutely the right decision,” Mr D’Aguilar said. “Had we not stepped in and allowed Hutchison Whampoa to close that hotel I think it would have been much more difficult to sell it onward to a purchaser with the credibility and financial wherewithal of Royal Caribbean and the ITM Group.

“While we would have incurred some operating losses holding on to the hotel, and one can always opine on whether the money invested was worth it, to us the longer term impact of the $300m investment and the 3,000 jobs created would far outweigh any any operating losses in the 18-24 months that we would have held that hotel.

“I don’t think anyone can negatively compare what we would have spent holding that hotel to the employment opportunities, direct and indirect, the effect on GDP, the increase in tax revenues we will receive from the 2.5m extra visitors that will descend on Grand Bahama. I don’t think anyone can believe for one minute that the benefits are outweighed by the costs,” he continued.

“We were right and they [the critics] were wrong. We said it was worth taking the risk to buy the hotel with the intention of selling it onward at reasonable speed, and that’s exactly what we’ve done. It took 18 months but it was well worth the wait and one of the reasons for the delay was Hurricane Dorian, which threw everyone off track for three to four months.”

A review of the Government’s so-called “fiscal snapshots” reveals that around $14.6m and $16.1m was pumped into the Grand Lucayan during the 2018-2019 fiscal year, and the 2019-2020 first half, respectively with another $32.4m described as an “initial equity contribution”. The latter is likely to have been the first purchase instalment sent to Hutchison Whampoa, which was to be paid in stages.

Mr D’Aguilar declined to specify how much the Government has spent on subsidising the Grand Lucayan’s operations, but the available data suggests that when the purchase price is factored in the total outlay is close to $100m.

He also revealed that the next step in determining Grand Bahama International Airport’s fate lies with its current owners rather than the Government. “Obviously the airport in Grand Bahama is a critical component of the revitalisation of the tourism industry on the island,” the minister told Tribune Business. “The redevelopment of the airport is a must.

“As to where we are in the negotiations, the Government is waiting on the owner to decide on the way forward. The Government does not own the airport and the current owner, Hutchison Port Holdings, is making some critical decisions on how best to move forward. The ball is in their court on the next step.”

Tribune Business previously revealed that Hutchison and the GBPA had both agreed to accept $1 apiece for their respective 50 percent equity interest in the airport, which is a subsidiary of the airport. They would retain the proceeds of any Dorian-related insurance payout, leaving the Government to oversee the redevelopment. The delay is thought to be linked to the wait for the insurance claim.

Mr D’Aguilar, meanwhile, said ITM Group/Royal Caribbean’s plans to expand Freeport Harbour through the addition of three extra cruise ship berths in the first phase - a number that could ultimately expand to seven - would attract other cruise lines who have never called on Grand Bahama before, such as Disney and Norwegian.

“You have the developers, ITM and Royal Caribbean, who are well funded, have a track record of success, and are likely to deliver on their promises,” the minister of tourism said. “These are what I call ‘Grade A’ investors. What they’re going to do is create a sense of optimism in the Grand Bahama economy, and cause other people to think about investing.”

Who does this yapping marsh mallow headed D'Aguilar think he's fooling? History has shown us time and time again that cruise ship visitors only financially benefit our corrupt politicians in a big way and leave mere crumbs on the table for the vast majority of Bahamians.

Cruise ship passengers do not benefit the local economy they benefit the cruise lines. My question however, relates to the 3,000 jobs. Are these 3,000 permanent jobs, or 2,500 construction jobs and only 500 permanent ones? Are they the highpaying ones, or again the low end ones?

Yeah but these will not be cruise ship passengers guys, they are buying a hotel....

I just hope it closes, we've been here before....

CHEAP TALK indeed. Why boast when they have taken millions of dollars in lost.

Never mind they will tax the poor to make up for the loss..

Dumb, DUMBER and DUMBEST. The investors see them for who they are, They are selling Bahamians into salivary. " THE UNCLE TOMS"

Correction "THE UNCLE TOMS" are selling Bahamians back into Slavery.