Big Red Machine In The Lead After Day 1 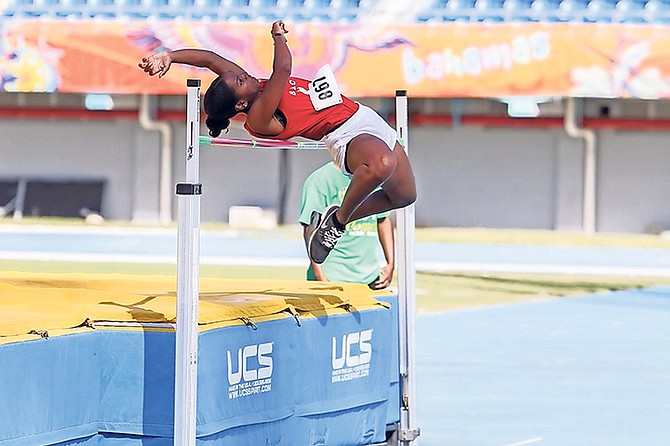 The St Augustine's College Big Red Machine got off to a promising start in their bid to reclaim the Bahamas Association of Independent Secondary Schools' Track and Field title.

The three-day meet opened yesterday at the Thomas A Robinson Stadium and the Big Red Machine tops the standings with 416 points, followed by their chief rival and defending champions Queen's College Comets with 375.50 points.

The two powerhouse programmes separated themselves from the field once again in a bid for this year's title as the St John's College Giants are a distant third with 167 points.

The St Anne's Blue Waves are fourth with 151.50 points and the Temple Christian Suns round out the top five with 94 points.

The Big Red Machine produced a pair of CARIFTA qualifiers in the field in the U-17 Boys' Triple Jump.

Stephan Farquharson took first place with a leap of 14.80m while teammate Brandon Hutchinson was second at 14.16m.

Both surpassed the qualifying standard of 13.88m.

QC was dominant in the 1,500m finals with several athletes that returned to repeat as champions.

CARIFTA standout Anthaya Charlton was in a new uniform with the St Anne's Blue Waves but continued her standard production with a first place finish in the U-20 Girls High Jump at 1.57m.

Phillip Gray of St Anne's displayed his versatility with a first place finish in the U-15 Boys 400m 53.74 and was also second in high jump at 1.65m

After day one in the 2019 meet, the Comets led the field with 434 points, followed by the Big Red Machine with 396 points.

QC went on to win with a total of 1,374 points ahead of SAC with 1,317 points. Full event results can be found at www.tekresults.net