Stateside: Anyone But Trump - And It Looks Like Biden 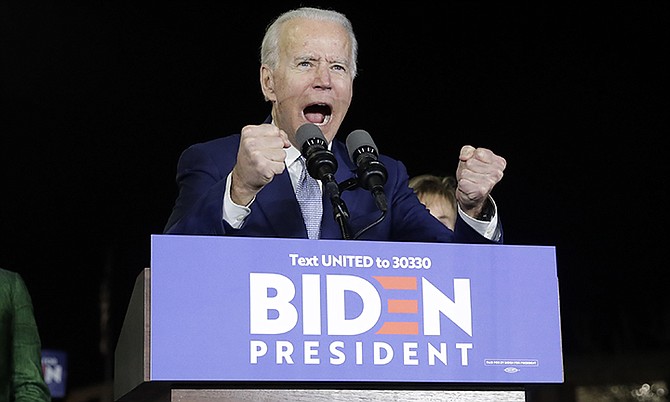 When voters went to cast their ballots in the Democratic presidential primary election on this week’s Super Tuesday, there were 14 names on the ballot in several states including Virginia. But only five actual candidates were still in the race. Such is the frenetic, chaotic nature of Democratic politics in this renewed era of Anyone But Trump.

When Joe Biden won the South Carolina primary race last weekend with a preponderance of the black vote, it was the first presidential primary election he had ever won, despite this being his third attempt to secure his party’s nomination for the White House.

But that South Carolina win, regarded as Biden’s last, best hope to get his campaign untracked, produced amazingly quick results. Within days, Pete Buttigieg and Amy Klobuchar had both left the race and endorsed Biden. Even forgotten Beto O’Rourke, the former El Paso, Texas congressman, chimed in with his endorsement.

All this activity put on a platter for Republican conspiracy theorists the notion that the Democratic Party and its ruling elites have banded together to deny maverick Bernie Sanders their nomination this year. Whether this notion is true or not, it certainly can seem plausible.

Few experienced observers expect Sanders could mount a serious or successful challenge to Trump unless the American economy falls apart in the next six months. That’s always possible, but with the US central bank intervening to lower interest rates in the wake of the recent stock market sell-off, the chances of a full-blown recession receded somewhat.

So what happened on Super Tuesday?

Biden, buoyed by endorsements by his erstwhile rivals, was a big, broad winner. He prevailed over Sanders in Texas, Virginia, North Carolina, Massachusetts, Minnesota, Alabama, Oklahoma, Arkansas, Tennessee and (probably) Maine. Sanders won in California, Vermont, Utah and Colorado. Bloomberg got some delegates, but not momentum and yesterday announced his campaign was over leaving Warren to wonder whether it’s time she threw in the towel as well.

Life after betraying the president

While American pundits, politicians and commentators got all excited about Tuesday’s polls, lost in all the furore was the curious case of Jeff Sessions.

This mild-looking but doggedly conservative politician from Alabama has become one of the most important case studies in the phenomenon now increasingly known as the Cult of Trump.

On Tuesday Sessions was in the highly unusual position of running for the Republican nomination for his own former seat in the US Senate - representing Alabama. He held the post from 1997-2016, when he left the Senate to serve as Trump’s first Attorney General.

The basic rule of the Cult of Trump is that the principal qualification for finding favour with the current US President is unfailing fealty to him, and/or donating to him directly or through his hotels and other properties. In the increasingly rarefied and isolated atmosphere of American politics at the congressional level and above, where senators and the president are routinely surrounded by an echo chamber of sycophants and yes-people, this is not altogether unusual.

But the degree to which Trump insists on public obeisance from allies and supporters is striking. It might even be unprecedented.

Few were surprised when, after impeachment failed in the Senate, Trump moved resolutely to push out of the White House and his administration those who had dared to offer testimony in the impeachment hearings that contradicted the administration narrative that Trump extorting Ukraine for dirt on Joe Biden’s son was really a hunt for corruption around the world.

“We want bad people out of our government,” Trump tweeted after the Senate acquitted him. No one paying attention doubts what Trump meant by “bad people.” He meant not only “Never Trumpers” but also those whose affiliation with him was less than complete.

The key question in the Alabama senate primary race this week was whether Jeff Sessions remains a “bad person”.

It was not ever thus. Sessions was one of Trump’s most trusted senior advisers on the 2016 campaign trail. The Alabama stalwart was actually the first sitting senator to endorse Trump’s then-renegade candidacy for the presidency at a time when the GOP power elite regarded the brash New York entrepreneur and showman with undisguised concern and disdain.

Sessions, who agreed with many of Trump’s positions on trade, immigration and other issues, was often at his side at campaign appearances as a national security adviser.

“I’m proud to call (Sessions) a friend,” Trump said as he nominated his close adviser to be Attorney General.

But things quickly changed. Very early in Trump’s presidential term, Sessions properly recused himself from the Mueller investigation on Russian interference in Trump’s election. The President, who clearly regards America’s top law enforcement official as owing first allegiance to him personally, saw Sessions as a traitor.

Trump said he still believes Sessions should have remained in the case and pushed for an early termination of the Mueller probe, which would ultimately last for nearly two years.

“I said, ‘what kind of man is this?’ I don’t really have an Attorney General. It’s sad,” Trump said after the Mueller inquiry concluded. He then pushed Sessions out of his administration in late 2018.

Last October, a year after exiling Sessions, Trump was still calling him “an embarrassment” and his “biggest (cabinet appointment) mistake”.

But for the past four months, Sessions has been running hard in Alabama for his old senate seat. And the biggest question in this race was which of the four candidates could profess allegiance to Trump most convincingly.

Sessions himself tells sometimes sceptical audiences that he has never wavered in his allegiance to Trump. He avoids the recusal issue if he can in public appearances. He took a year off after Trump fired him, only re-entering public life last fall to announce his candidacy for his old seat.

Polling has suggested Trump’s favourable ratings in Alabama are his strongest in any state. Any Republican primary candidate in Alabama must, therefore, pass the Trump loyalty test.

Other candidates in the running included former Auburn University head football coach Tommy Tuberville, among whose distinctions were his six straight wins over arch rival University of Alabama before Nick Saban arrived as head coach of the Crimson Tide.

Tuberville campaigns in a big bus with “Trump and Tuberville” emblazoned on the back. “As Attorney General, Sessions handed the ball to the other team and walked off the field the moment play started getting rough,” the former football coach said of Sessions’ recusal in the Mueller investigation.

Also in the race was Bradley Byrne, a Mobile-area congressman and staunch Trump defender during the impeachment hearings. Trump has appeared in public with Byrne on a couple of recent occasions.

“I think Jeff Sessions was controlled by the swamp and the people at the Justice Department” in making his recusal decision, Byrne has declared.

Rounding out the field was Judge Roy Moore, the accused predator of underage girls whose disgraceful candidacy led to the astounding 2017 upset victory of Democrat Doug Jones in a special Alabama senate race to fill Sessions’ then-vacant seat.

What happened? Tuberville and Sessions both wound up with about one-third of the vote, and will face each other in a March 31 run-off election. Byrne finished third and conceded his defeat. Moore finished in a weak fourth place.

But the big news yesterday came via Fox News. Trump weighed in, after maintaining an uncharacteristic silence throughout the primary campaign. True as always to his instincts, Trump slammed Sessions hard, repudiating him again for abandoning him over the Mueller investigation.

Democrat Jones will face Tommy Tuberville in November. You can take that to the bank.

Trump is not a politician and does not fit your criteria of free stuff and abortion at birth and a whole myriad of other issues you deem normal in your none Christion beliefs .But what he ran for president on he is doing unlike your democrat friends who have been in office 40 something years and have nothing to show for their time except becoming millionaires complaining about other millionaires So quit trying to blow smoke up our arses as America is prospering again and you need to get a life!

"America is prospering again?" Listen closely to Sanders. He doesn't lie. The stats he provides are what the real America looks like. The 1% is prospering. The vast majority are struggling, just like here. sweptaway, turn off your TV and do some honest reading. TV is meant for one reason, and one reason alone. To sell things. The airwaves are owned by billionaires. Are you one? The death of both The Bahamas and the US will be because the people have become willfully ignorant and continue to elect rich jackasses who claim to be "Christian" who really couldn't give a damn about anything other than themselves, their donors and their re-election. America is not prospering, unless you mean the stock market. Know how many ordinary Americans own stocks? Probably not, cause you won't see these stats on TV. Please, do some reading and get a grip on reality.

Bernie Sanders can not win the democratic party nomination.An analyst on CNN basically said so.The fire wall created by the centrist bloc in the democratic party in the 1980's held on super Tuesday.He has not much support among key factions in the party like African Americans,white southerners and blue collar workers.

Bonefish, All this tells us is that people need to be educated. Just what the rich don't want, for if people were educated they would understand that Sanders is the only one who has all of the groups you mentioned in his policy interests. Please understand, the US is only working for the fewer. Once people wake up they would understand that the rest of these guys, proven by their records, work for the bankers and the richest. They do not represent the vast majority of people. It does boil down to education. Just what the US and The Bahamas is lacking. Wonder why?

The Donald has no worries--He will cruise in November----Take that to the bank!

The Donald has no worries---He will cruise in November---Take that to the bank!