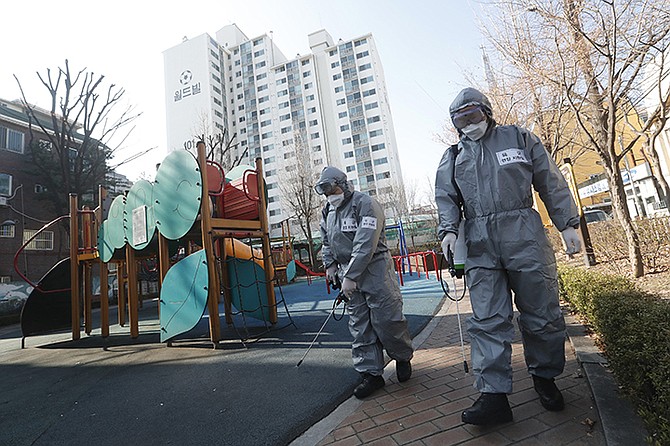 South Korean army soldiers spray disinfectant as a precaution against the coronavirus at a park in Seoul, South Korea, Thursday. The Ministry of Foreign Affairs has implemented new border control and quarantine measures for people travelling to the Bahamas from Italy, South Korea and Iran. (AP Photo/Ahn Young-joon)

THE government has implemented new border control and quarantine measures for people travelling to the country from Italy, South Korea and Iran – where there is a prevalence of novel coronavirus cases, the Ministry of Foreign Affairs announced yesterday.

As a result and with immediate effect, any non-Bahamian resident who has visited any of the three countries in the last 20 days will be denied entry to The Bahamas, a statement from the ministry said.

However, Bahamian citizens and residents coming from Italy, South Korea and Iran will be subject to quarantine for a maximum of 14 days.

This new restriction means that a travel ban and quarantine measures are now being applied to four jurisdictions, including China. It is also part of the government’s enhanced effort to address the public health threat that COVID-19 poses.

Non-residents currently en route to The Bahamas from these jurisdictions will be subjected to the same protocol for returning citizens and residents, the Ministry of Foreign Affairs noted.

When contacted for comment, Tourism Minister Dionisio D’Aguilar said yesterday he understood the reasoning behind the newly imposed restrictions, adding given the circumstances and visitor numbers from these destinations he was not overly concerned about a fall off in tourism performance.

Visitors from Italy, South Korea and Iran accounted for less than one percent of tourist arrivals in 2019, he said.

The World Health Organisation has indicated that the virus, COVID-19, has now spread to more than 75 countries.

At least 47 of these countries have 10 cases or less, with some reporting their first cases.

“Significantly, however, there is a prevalence of cases emerging in a few selected countries,” the Ministry of Foreign Affairs’ statement said. “According to the director-general’s March 4, 2020 briefing, almost 90 percent of those cases are from three countries: Iran, South Korea and Italy.

“The data is compelling and out of an abundance of caution, the government of The Bahamas has decided to implement border control and quarantine measures for persons coming from those countries.

“Effective immediately any non-resident who has visited South Korea, Iran or Italy in the last 20 days will be denied entry into The Bahamas. These countries will be added to China, for which, we implemented such measures on January 30, 2020.

While there were no reported or confirmed cases of COVID-19 in The Bahamas up to press time, officials said the government is taking extra precautions to protect the safety and health of residents and visitors.

“Very few of our visitors come from those three countries. As it relates to China, South Korea and Iran we are assuming that most come by air and not by sea.”

As it concerns China, 3,679 people visited while 564 came from South Korea last year.

Iran had 591 new positive cases recorded since Wednesday, with 739 people recovered from the virus and released from hospital, international media reports said up to press time yesterday.

All of Iran’s 31 provinces have been hit with the virus, that country’s health ministry announced Thursday. The capital Tehran has the highest number at 1,523, while the city of Qom, the reported epicentre of Iran’s epidemic, had 386 confirmed cases.

In Italy, the death toll from COVID-19 has exceeded 100 and there are more than 3,000 confirmed cases of the illness.

South Korea has had more than 5,000 confirmed case of COVID-19 and more than 30 deaths.

Spend more time in the sun and detox of the virus

There was enough info available weeks ago to justify the Bahamas placing travel restrictions on these additional countries. Once again though, our government has been slow to react, and then it's always much too little done, way too late.

There are probably quite a few New Providence residents already infected with COVID-19 but not yet showing symptoms. The only reason we don't know how wide spread the virus is in the Bahamas is because our government failed to early on obtain a sufficient supply of the test kits needed to do so. Now it's almost impossible to compete with the U.S. to get an ample of the test kits. We're gonna have Bahamians dying from COVID-19 incorrectly diagnosed as severe flu cases.

Meanwhile Minnis has been much too busy cutting his back-room deals with foreign investors, mainly the cruise ship companies like Royal Caribbean, Carnival and Disney, to be concerned about protecting Bahamian lives from the impending wide spread outbreak of COVID-19.

... actually the government has a few kits, but are unlikely to want to test potential cases because of the negative economic impact that would have. Most infected young people will likely recover without incident, older patients who die will just be diagnosed with pneumonia!

Wasn't it reported we had 50 kits? So plenty to go around for all cabinet ministers and their wives. They are the ones who travel most.