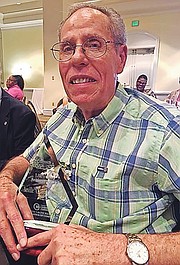 “It is with great sadness and a broken heart that we inform you of the passing of our employer, mentor, adviser and friend, and the shops namesake Chappy,” according to a statement released Thursday.

“Chappy has been a pillar in the community of Freeport for years and has helped many people on their journey in life. He was a long standing member of the Rotary Club and a founding member of Calvary Bible Church – Freeport. He will not easily be forgotten,” the statement read.

Mr Knowles, according to the statement, has battled with Muscular Sclerosis for more than 30 years.

“He is in the loving arms of his Saviour Jesus Christ and, in knowing this, we are comforted because he suffers no more. We ask that you keep those close to him in prayer, especially his loving daughters, Tabitha and Tara, their husbands and sons. He is with his lovely wife, Maryann, in Glory. May his soul forever rest in peace.”

Mr Knowles was the former owner and operator of LMR Drugs and Minimall, downtown, which he operated for many years before selling the business several years ago. After selling the business, he opened a small operation in East Sunrise Highway and went into semi-retirement.

Nice guy! Condolences to his family!

He bore his illness with dignity and strength always remembering others who struggled. Rest in peace.