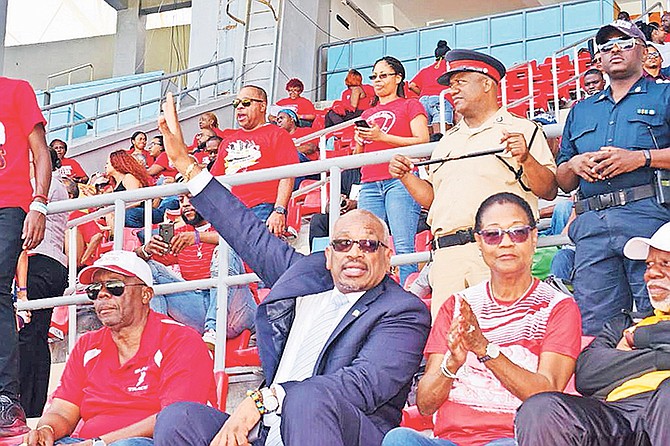 A WIN in the final event of the day widened the margin for the St Augustine’s College Big Red Machine as they continue their bid to unseat the Queen’s College Comets as BAISS track and field champions.

Headed into day three, just 13.50 points separate the Big Red Machine from the Comets, setting the stage for a thrilling finish in today’s finale.

SAC has a combined team score of 682 points while the defending champions Comets continue to chase at 668.50. SAC began the day with a 42.5-point advantage, but the Comets were able to cut into that deficit by 29 points.

The standings remained virtually unchanged for the rest of the 12-team field.

The St John’s College Giants are third with a total of 268 points, the St Anne’s Blue Waves are fourth with 229.83 followed by the Temple Christian Suns in fifth with 167.83 points.

The U-17 Boys Long Jump took centre stage with the first pair of CARIFTA qualifying marks on the afternoon.

The Giants’ Keyshawn Strachan also surpassed the CARIFTA standard of 60.94m. Strachan finished first with a throw of 62.48m followed by a pair of Comets - Sean Rolle (56.46m) and Nicholas Zervous (46.59m).

Both the U13 Girls and U13 Boys saw record setting performances in the Shot Put.

D’Yontae Mackey of the Jordan Prince William Falcons won the U13 Girls with a throw of 7.65m to break the precious record of 7.18m.

The top three finishers in the U13 Boys all surpassed the previous record of 8.66m. Matthew Miller of Aquinas College took first at 12.16m, Calvin Armbrister of TC was second at 9.52m and Seth Gibson of QC was third at 9.00m.

The 100m finals highlighted events on the track and the Comets’ girls had a dominant showing.

The Blue Waves also had a pair of 100m winners in the U20 division. Charlton capped her busy day with another first place finish in 12.19 secs while Dominic Archer won the U20 Boys race in 11.12 secs.

Full event results can be found at www.tekresults.net