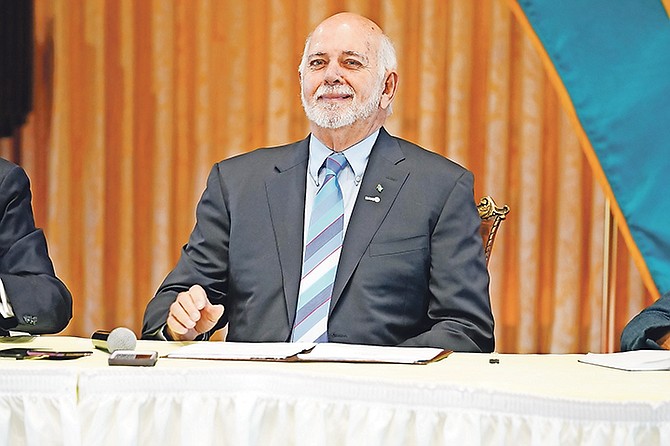 A NATIONWIDE volunteer programme is to be launched by Governor General CA Smith on Monday in an effort to foster a culture of volunteerism in the country following Hurricane Dorian.

The initiative, “Volunteer Bahamas - A Call to Action”, was announced during a press conference held at Government House yesterday. Officials are hoping it will be “the largest movement of volunteerism” in the country. Speaking at yesterday’s event was Volunteer Bahamas chairman Barry Rassin, who noted the importance of having a national volunteer movement, especially in the wake of Hurricane Dorian.

“The value of volunteerism of the power of volunteers cannot be overestimated as was evidenced in The Bahamas post-Dorian,” he said.

“This fact brought home the realisation of the urgent need to both reintroduce that spirit of volunteerism in The Bahamas, as well as... recognise and reward ongoing volunteer efforts in order to promote and sustain a culture of volunteerism.

“…To this end, ‘Volunteer Bahamas – A Call to Action’ is envisaged to serve as a single, strong central support system not to interfere with, but to harness and co-ordinate the work volunteers throughout the country.”

With over 850 service organisations recognised in the country, Mr Rassin said Volunteer Bahamas will strive to bring those groups together and coordinate charity-related activities within the community.

According to officials, the programme will be operated by a secretariat, which will be established under the auspices of the governor general, the project’s patron.

“We have the power and potential in our hands to make every single community, every neighbourhood, every school, children’s or senior’s home, every park and public space a place in which we can all take pride if each of pledges to play some small part in a volunteer movement that we hope will serve the nation,” Mr Smith said of the movement.

Next week’s launch will feature live performances from the Royal Bahamas Police Force and will also include the unveiling of a song by local artist, Julien Believe.

“(It) will certainly set the stage for what promises to be a wonderful journey of service and charity to our fellowmen and I invite Bahamians everywhere to join us as we build a better and stronger Bahamas,” added Mr Rassin.

The launch will be followed by a nationwide tour by Mr Smith in an effort to inspire and teach students in the country about the importance of helping others.

Is Rassin also going to be the army general of the more important COVID-19 voluntary army that should have been organized a couple of months ago?