Insight: Don’T Panic - It’S Time To Think Of Others, Not Just Ourselves 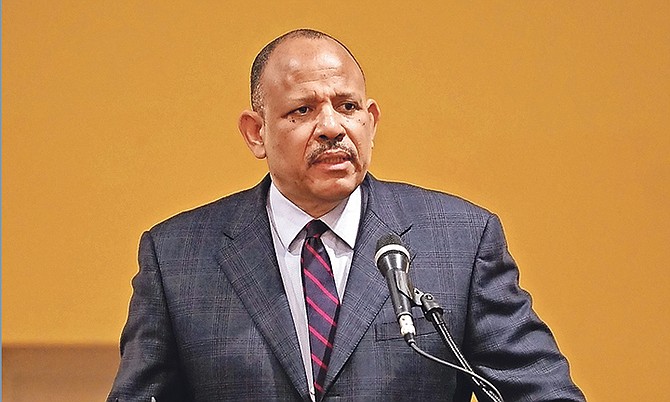 Under the direction of Health Minister Dr Duane Sands, the Ministry of Health has given us good guidelines on how to best protect ourselves.

AS the nation has watched the coronavirus, also known as COVID-19, go from a “foreign virus” that spread through Wuhan, China, with epic speed, inch closer and closer to our shores, it has been unsettling to see it reach 118 countries to date. No doubt, any nation still reeling from the disastrous impact of Hurricane Dorian would have citizens gripped by fear.

Nonetheless, there is a point in between fear and preparation where we must realise that over-reacting may do more to harm us than help us.

We can definitely argue that a global border shutdown at the onset may have allowed those already infected in China to go through quarantine and hopefully they would have all recovered allowing the world to dodge a gigantic bullet. Unfortunately, that is not today’s conversation. Since the World Health Organisation last week made the COVID-19 outbreak a global pandemic, would-haves, could-haves and should-haves have all been tossed out of the window.

We can only look at what we can do now. And for each country, that has to make sense.

For The Bahamas, a nation dependent on international tourism, we are certainly in a vulnerable position. With one of our major source markets being levelled by the spread of the virus, the WHO’s declaration happened at the right time.

Likewise, cancellations and suspensions of major sporting events and seasons, as celebrities and government leaders contract the virus too – The Bahamas is able to react in an environment that is becoming more controlled as other countries tighten up their borders.

This much was seen last week, as a ship carrying five individuals infected with COVID-19 was not allowed to dock at its final destination in Barbados. Subsequently, this ship was also refused docking in The Bahamas by the ministry of transport in a decisive act to prevent the spread of the virus in our country.

Though decisions like this are what we want to see, we also must not take for granted, being a tourism-based economy depending heavily on imports, escaping this crisis entirely.

Health Minister Dr Duane Sands intimated as much last week when he spoke to local media.

Providing his best estimate, Dr Sands said: “The worst case scenario, let’s say is Wuhan, China, where there have been 80,000 cases. Wuhan has a population of about 15 million, but if we say out of the Chinese population of 1.4 billion…that maybe 80 million people contributed to that 80,000 cases and then you extrapolate to the population of The Bahamas which is 400,000 people.

“So even if we have a Wuhan-like scenario in the Commonwealth of The Bahamas, we’re looking at hospitalised, potentially less than 100 people and the Intensive Care Unit, deaths, etc worst-case scenario based on the Wuhan scenario even less.”

Certainly, other factors come into play. Population density, personal hygiene, pre-existing health conditions, healthcare system capacity and measures taken to stem the spread of the virus once the first case is detected – all play significant roles, the latter of which have been key factors in China finally being able to slow down the spread of disease.

Some of the larger question marks for us are twofold. From the government side of things, what contingencies are being put in place to support our healthcare system? We just witnessed its crippling in Hurricane Dorian. While the types of needs will be different, of course, the government is hopefully making the best of the lead time it has. And to be fair, by all of their indications, they have continuously told the Bahamian people that they have been getting ready for weeks.

We can only hope that when it is time to show and prove it that stable hands are at the wheel.

The other piece that determines how we will get through this depends on the people – the citizens of The Bahamas. As we have become a nation far removed from a collective society, the penchant to only look out for “number one” will cause unspeakable heartache if we cannot see beyond such selfishness.

Not if, but when the coronavirus reaches our shores, it will be incumbent on every citizen to think of their fellow Bahamian. We will have to love the elderly and practice good hygiene. We will have to take care of each other in that way and inform ourselves with qualified knowledge from the experts.

Running to be the first to spread misinformation only results in widespread pandemonium.

Getting into a frenzy stocking up on items that may not necessarily help you in the grand scheme of things is nonsensical. Everyone just needs to take a breather.

Certainly, everything looks a lot scarier when it happens to the US. But in that same vein, with them being forced to take a more active role in preventing the spread of the virus, we have gained a lot of valuable insight for what not to do.

Focusing on the information and following the advice of experts internationally and locally is what will give us the best chance of getting through this with minimal damage. The prime minister is right in that we should not be panicking. Rather, we should prepare ourselves.

Under the direction of Health Minister Dr Duane Sands, the ministry of health has given us good guidelines on how to best protect ourselves and as this fluid situation continues to take shape, we must do away with partisan-driven attacks on the government and avoid false narratives as COVID-19 doesn’t care where you mark in the ballot box.

Together - and only together - we can get through this.

Sands's absurd attempt to extrapolate Wuhan, Red China's experience with Covid-19 to the Bahamas ignores umpteen differing variables of great significance, not least of which is the ruthless Xi-led communist regime's propensity for not telling the truth about most things to the rest of the world.

It is therefore foolish and reckless for Sands, as a medical doctor, to suggest the spread of Covid-19 in the Bahamas will only result in at most 20 critically-ill cases and even fewer deaths. The public needs to remember that Sands is the same doctor who still maintains that Hurricane Dorian only claimed a total of 60 lives.

I fear many elderly Bahamians with pre-existing medical conditions may die in the coming months from a diagnosed fatal case of influenza rather than Covid-19. That would certainly help contain the death toll from Covid-19.

"The public needs to remember that Sands is the same doctor who still maintains that Hurricane Dorian only claimed a total of 60 lives."

Sands has said publicly that cabinet needs to make a decision on the numbers. He said this because he knows even in the absence of bodies, the count is much higher than 70 and to continue telling the public it's "only" 70 stretches belief and public confidence. In this episode I see an almost manic attempt by powers in cabinet (thats Sands does not agree with) to protect the "everything's fine over here Mr Tourist man" image of the Bahamas. I made a comment on it the week after Dorian and was told that it didnt make sense, why would they do that? Well it doesnt make sense and they did it. Remember also that just last week in Bizarro World, tourism officials were saying we could benefit from the covid crisis by accepting conventions originally scheduled in cities that had since been shut down. You cant make this up

If we have more than 20 cases we are in trouble. They have 100 test kits for the entire country.

The test kits are no doubt reserved for the parliamentarians and others in the political elite.

The political parliamentarians governing party cannot be without their wives and also their children and grammie and just like if they wives can get to travel at the expense of taxpayers along with Govt Offical businesses abroad .....then they obviously must have available ones...and then their children...and well ....somewhere there might be shortage.... Given the amount some politicians cannot get enough for their family.

Excellent insight @Malcolm Strachan. We should all take your advice, calm down and focus on getting through this crisis.

Suggest you get another handle for this website. You've been too easily flagged as sitting in the VIP front car on the Minnis 'choo choo gravy train'.

No. Look to Cuba. They are sending twenty-one specialist nurses to Jamaica (March 14) and hundreds to other Caribbean nations and have developed one of the leading treatments for Covid 19 used in China and now Italy. The Bahamas must act now to retain Cuban nurses before they are all taken.

My thoughts exactly when I read the headline to this article.

Most of the elected officials in the Minnis-led FNM government are corrupt and greedy to the core and therefore incapable of ever thinking about others. They only think of themselves and their cronies on board the Minnis gravy train known as "The Choo Choo Express".

Hmmmmm.....looking at the Minister's diagnosis maths in coming up at the 400 Bahamas and looking at the sample China of one land locked city in a bigger area and their vast resoirces to corral every powers, build a hospital in 10 days....and compare Bahamas made up several islands less resources coming up with 400.....Yep, about right, like hearing about electricity, shantytown illegals turming themselves by deadlines, like catching employers of illegal workers, like statistics on unemployment, finding places for healthy PMH residents outside hospital for years,...I wid you Doc ...dont panic.

Shouldn’t this country be looking towards China and Taiwan for guidance as they seem to have gotten control over this Corona virus?