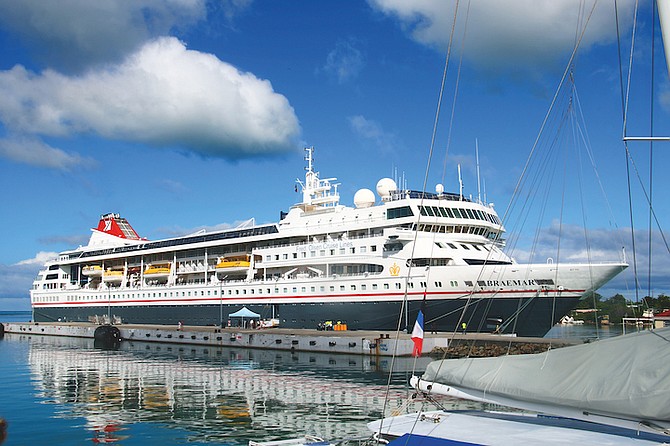 MONDAY 6pm UPDATE: The MS Braemar, that was turned away from several Caribbean ports after passengers fell ill with novel coronavirus, is scheduled to dock in Cuba Tuesday after the island agreed to help transfer those aboard to planes bound for the United Kingdom. The Cuban government said it had decided to allow the Braemar to dock in the port of Mariel, about 35 miles (56 kilometres) west of the capital, “due to the urgency of the situation and the risk to the lives of sick people." Fred. Olsen Cruises said that the ship had 22 passengers and 21 crew members in isolation after displaying flu-like symptoms and five aboard who tested positive for the new coronavirus. (AP)

The ship captain announced on board on Monday morning that he is sailing to Cuba where all guests will be repatriated by air to the United Kingdom.

Officials said they are working with the Foreign and Commonwealth Office to confirm travel arrangement details.

Currently, 22 guests and 21 crew are in isolation after displaying flu-like symptoms.

Last week, the Bahamian government denied the ship permission to dock and disembark its passengers in this country. Since the ship’s arrival in Bahamian waters on Saturday, it was allowed to anchor 25 miles south west of Freeport.

In his national address on Sunday, Prime Minister Dr Hubert Minnis said the ship should have called on a port that has the capacity to deal with it.

“Our maritime authorities were in regular contact with the ship owners and my government was in touch with governments who enquired about the status of their nationals,” he said.

The Braemar ship sails under the Bahamas flag.

Minnis did the right thing here. Hopefully the ship was not boarded temporily by anyone from our shores while it was in our terratorial waters who then returned to our shores.

It is my hope that they were provided with what ever necessities they needed.

Hopefully by air drop from a US Coast Guard helicopter before heading off to Cuba.

Good for Cuba to do this and make up past history. Sometime ago history 1939 German cruise ship Motorschipp St. Louis with similar 901 plus passengers Jewish fleeing Naxi Germany was denied entry and docking in Cuba and returned to Europe discharging passengers in different countries. Cuba seems much better capable in Caribbean region with medical facilities, well trained Doctors, research labs, drugs production, well controlled medical facilities. Wish the best to ship and passengers.

It took a country that people seeks to call undemocratic to do the humanitarian thing in this regard. Kudos to Cuba, who realizes that we are our brothers keeper, and what affects one directly affects all indirectly. . Sadly many of us if we were on that ship or a family member of ours, we would have want the ship to dock to allow our loved ones off. Man to man is sadly still so unjust.

What we don't know is what the UK government with the assistance of the US government negotiated with a very desperate Cuba behind the scenes. We are thankfully not as desperate as Cuba....at least not yet. Give Minnis a couple more years.

It has nothing to do with desperation. It has to do with the humanitarian response in a time of crisis. It shows that people are still human. Further, Trump does not relate with Cuba, so why would the US negotiate anything. Whether we wish to admit it, our country got this one wrong. Imagine if the people looked us after Hurricane Dorian and said we on our own? Cuba showed the way how you react when others are hurting.

I have no clue what metric, you are using, for desperation. If you are talking cellphones, and Ipads, and car loans, maybe. Countries that have no agriculture, import all, food, depend almost 100% on tourism..... Go figure. NOt throwing shade, just saying

The Princess Cruise ship that had over 600 cases of Corona has offloaded its passengers and is now anchored off the coast of California. It has a skeleton crew and will be quarantined. Obviously The Bahamas and the Caribbean countries that rejected the Bremerton doesn’t have the capacity to medically manage a ship with multiplying cases of Corona. The Bahamas made a wise decision and allowed the boat to get fuel and supplies but to not dock. The decision Cuba made is a great one based on humanitarian efforts and hopefully the consequences will not be negative fallout. Trump made a wise decision when he instructed these ships to stay in port.

Cuba is sending twenty-one specialist nurses to Jamaica (March 14) and hundreds to other Caribbean nations and have developed one of the leading treatments for Covid 19 used in China and now Italy. The Bahamas must act now to retain Cuban nurses before they are all taken.

I hope so too. Cuba spends it money on education and health, as opposed to useless gadgets and gizmos.

Its ironic though. Just 2 weeks, ago, your MOE announced hiring Cuban teachers and people we bawling about their cousin from Canada who was a "true" Bahamian, who could not get a teaching job. WE are all interconnected whether we accept it or not.