Two Gunmen - One With A Rifle - Hold Up Store

POLICE are investigating a shooting incident and two armed robberies that occurred over the weekend.

In the first incident, a man was left in hospital after a shooting on Saturday afternoon.

According to police reports, shortly after 5pm on Saturday, a group of people were gathered at a funeral reception at a residence on Bay Lilly Drive in Sea Breeze Estates, when the occupants of a silver coloured vehicle fired gunshots into a crowd, injuring one man before speeding away.

The injured man was taken to hospital where he is listed in critical condition. No one else was injured during the encounter.

The second incident took place shortly before 2am on Sunday.

Police said a man was on Moore Avenue and Minnie Street yesterday when he was approached by three men – one armed with a firearm – who robbed him of cash, before getting into a black BMW and speeding away.

On Sunday, a video of another armed robbery, believed to have occurred at a local grocery store, made its rounds on social media.

The incident was not included in the daily crime reports, but The Tribune understands the robbery took place at Budget Food Store in Nassau Village shortly after 7am. 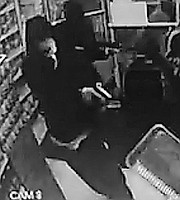 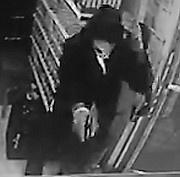 In the 35-second clip, a man dressed all in black can be seen receiving what appears to be a receipt from the cashier, before heading towards the door.

However, as he pushes the glass door to exit, he holds it open for two men who rush into the store.

Once the two men enter the store, the first man lets go of the door and bolts out of the shop.

Another man, who appears to be a shelf stocker also runs out of the store. A woman customer swiftly follows.

The men – clad in black hoodies, face masks and white gloves – were armed with a handgun and assault rifle.

In the security footage, they can be seen pointing their weapons in the direction of the cashier, before making their way to the counter.

No one appeared to be harmed in the incident. Investigations are ongoing.

Anyone with information that can assist police with their investigations can contact the Central Detective Unit at 502-9991/2, Crime stoppers at 328-TIPS (8477) or the nearest police station.