Peter Young: Keep The Politics Out Of This Crisis 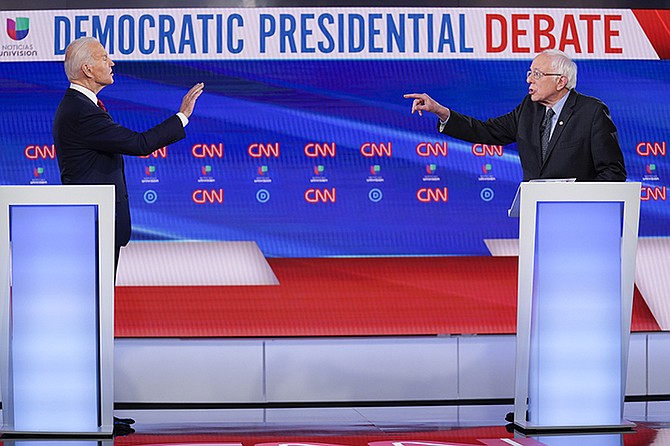 Joe Biden and Bernie Sanders at their presidential debate on Sunday night.

My heart sank when I saw the headline ‘Biden and Sanders slam Trump over response to coronavirus crisis’. Then, after tuning in to CNN and MSNBC, who relentlessly vilify President Trump whatever he does, my worst fears were confirmed.

Even at a moment of national emergency declared in response to the coronavirus pandemic, both the Democrats and parts of the media were politicising the crisis.

That is not to say that the government’s reaction has been anywhere near perfect. But, if there was ever a time for a bipartisan, coordinated approach to a problem which everyone wants to resolve for the benefit of the whole country, this is it. Perhaps politics was ever thus because it remains a dirty business, though America did show unity in reaction to the 9/11 attacks.

It is the case, of course, that, even after having appointed a task force of experts chaired by Vice President Mike Pence to deal with the threat of COVID-19, Mr Trump does not help matters by tweeting comments or speaking directly to the press and others with remarks which are inconsistent with what the task force is saying. For example, his public comment at the weekend that the virus was under ‘tremendous control’ could have lulled people into a false sense of security. But it was at variance with the view of Dr Fauci of the task force who was saying that the worst is yet to come.

By contrast, in Britain people seem to be pulling together more readily in response to the crisis. Clearly, no one should underestimate the gravity of a situation where there is no cure for COVID-19 and no vaccine so that the threat to human life is growing.

The facts speak for themselves – by last night 1,543 people in Britain had tested positive with 55 fatalities, and these figures are growing daily. They are being updated in the media almost by the minute and a debate is raging about whether the Prime Minister has gone far enough to protect the country’s 66 million population against the pandemic by taking measures to slow down the spread of the virus.

It is said the science is not exact because this is a new virus. But, as someone said, it is still better to trust the scientific experts rather than the armchair critics. I believe Mr Johnson should follow the expert advice he is being given by the government’s Chief Medical Officer and Chief Scientific Adviser in light of Britain’s unique circumstances rather than simply copy what other countries are doing – with Italy first and now Spain, France and others in virtual lockdown.

While it is for political leaders to decide the appropriate action, it is likely the Prime Minister will respect a consensus view of what has become, reportedly, an inner circle of advisers and ministerial colleagues. He is surely seeking to strike a balance between what is considered absolutely necessary in relation to self-isolation, ‘social distancing’ and restricting large public gatherings and resisting calls for extreme constraints on normal life.

His refusal to close schools may seem to some to be wrong and out of step with the actions of other countries. But, unless the situation worsens, there are sound arguments against closure; for example, the extreme disruption, the relatively lower risk to young people and issues like avoiding the likelihood of National Health Service workers and other key personnel prevented from working because of the need to look after children at home.

As has been said, too much intervention can do more harm than good but the government should remain flexible and impose new measures when they become necessary and the time is right.

Against this background, the number of prominent figures and the ‘man in the street’ alike, who think they can handle the crisis better than the government, is growing. Of course, Britons tend to be cynical about the motives of politicians and should always hold them to account. But unless others have the full picture in front of them – as the Prime Minister has - how can they reasonably expect to be able to take an informed view about what action should be taken?

I believe the key for the government is to be honest and upfront with the public about the crisis and always explain fully what they are doing about it. There surely need to be daily briefings because it is the unpredictability and uncertainty which causes major concern.

By being as open as possible, the government should secure public confidence and reduce the fear, panic and mounting hysteria that can lead to extreme behaviour. This can be almost has contagious – and even as dangerous - as the virus itself.

Meanwhile, at the time of writing, the FNM government has just announced its own action plan to deal with COVID-19. At first sight it looks to be very much on the right lines. Yesterday’s editorial in The Tribune described the situation perfectly.

One can only wonder what was going through the mind of Prince Harry as he and his wife Meghan joined his grandmother, Her Majesty The Queen, and key members of the Royal Family at the Commonwealth Service at Westminster Abbey on March 9. This was the Duke and Duchess of Sussex’s last public royal duty before stepping down as senior royals at the end of the month and going into self-imposed exile in Canada.

In the grand and imposing surroundings of the Abbey - created not least by its famous and inspiring history – surely no one could fail to reflect on the importance of the Commonwealth as an organisation. So, in light of The Queen’s wish, which has been made known publicly, that he and Meghan should be special ambassadors on royal trips to Commonwealth countries that she could no longer do because of her age, perhaps few people would have been surprised if he were to have harboured second thoughts about relinquishing his royal duties.

What a contrast this has been to the commitment and sense of responsibility displayed by The Queen herself. This goes back to her speech to mark her 21st birthday, delivered in Cape Town in 1947 during a royal visit to South Africa, when she vowed to dedicate her life to the Commonwealth. Only four years later, she acceded to the throne on the death of her father King George VI in 1952. The organisation has grown over the years from eight nations to 54 with a combined population of 2.4 billion or about one third of the world’s total - and The Queen has undertaken over 200 visits to Commonwealth countries during her reign of 68 years.

Some regard the continuing existence of the modern Commonwealth, which was formed in 1949, and the successful co-operation in numerous ways among its member countries, as one of The Queen’s major achievements. For there can be little doubt that, as Head of the Commonwealth, her devotion and steadfast commitment to this voluntary inter-governmental association of mostly former territories of the British Empire have provided the essential long-term stability and continuity to enable it to thrive.

Apart from the Commonwealth Games, which is a well-known and popular event held every four years, and the biennial heads of government meetings (known as CHOGMs), the organisation does not attract much publicity. Having evolved into a much larger association from a small group – Australia, Canada, New Zealand and South Africa – as Britain’s colonies became independent and self-governing after the Second World War, the Commonwealth has been described as a ‘family of nations’, with a shared language, history and culture, common values and customs as well as common legal systems, institutional frameworks and close trading links; and all of this is held together by special bonds, including affection and ties that are invisible but effective. Furthermore, within this association there is an important group of 16 Realms, including The Bahamas, with whom there are even closer links because The Queen is their head of state.

Increasingly, Commonwealth co-operation has benefited all its members via a host of voluntary, philanthropic and non-official organisations termed the ‘People’s Commonwealth’ as well as through bodies like the Commonwealth Development Corporation and the Commonwealth Fund for Technical Co-operation fostering aid, technical exchanges and practical assistance – and a business culture involving the promotion of intra-Commonwealth trade has gradually developed.

Such is the broadening of co-operation that the 2018 CHOGM agreed on action in relation to trade and investment and major issues like security, human trafficking, the environment and sustainable use of resources together with climate change including the vulnerability of Small Island Developing States to natural disasters like hurricanes and rising sea levels. Moreover, the Commonwealth Secretariat in London exists to provide technical assistance to its members in many different areas like strengthening democratic institutions and good governance and promoting the rule of law.

Perhaps the most significant recent development for the Commonwealth is Britain’s push to re-establish and reinvigorate her longstanding – though in some cases neglected – relationships with her former colonies as part of her bid to become a global player again after leaving the European Union. It appears that British policy is to foster stronger trading links with the whole Commonwealth and not just the larger economies like India, Australia, Canada, Singapore and South Africa.

It seems to me this is good news for The Bahamas. The development of closer ties with Britain and enhanced bilateral co-operation should be of mutual benefit; not just trade and investment but in areas – to name just a few -- like security and counterterrorism, drugs interdiction, illegal migration, human trafficking, the environment and climate change including disaster preparedness, educational exchanges and police and military training. With all this in mind, an important first step has been the re-establishment of a British diplomatic presence in Nassau – so the portents for future co-operation are, indeed, good.

‘When you’re close to death, you know what life means’

Somehow, I managed to miss reports in the media during January of the passing of Sir Roger Scruton who was described last year as Britain’s most famous living philosopher.

Specialising in aesthetics and political philosophy, he was revered for his towering intellect. He espoused traditionalist conservative views and was regarded as one of the foremost conservative thinkers in the country.

An academic of outstanding achievement over many years, he was a professor, writer and government adviser and the author of more than 50 books on morals, politics, architecture and aesthetics. Challenged by the Left for his claimed controversial views, in response to criticism he railed against the politically correct or ‘woke’ culture.

Wonderfully articulate as befits an academic and political philosopher of such note, he wrote in the British magazine The Spectator that Britain was entering a dangerous social condition in which the direct expression of opinion that was deemed to conflict with a narrow set of orthodoxies was liable to be “instantly punished by a band of self-appointed vigilantes”.

For those interested in the distinction between the Left and the Right in politics and the thinking behind each – together with as lucid an explanation one is likely to hear of the difference between capitalism and socialism and what each means in practice – I commend his televised address to the Oxford Union in 2017. An internet search will reveal where to find it.

In Britain, many have expressed regret at the passing of this erudite man described as one of the great intellects – and the greatest conservative - of our age. It was reported the last words he penned were that coming close to death you begin to know what life means, and what it means is gratitude.