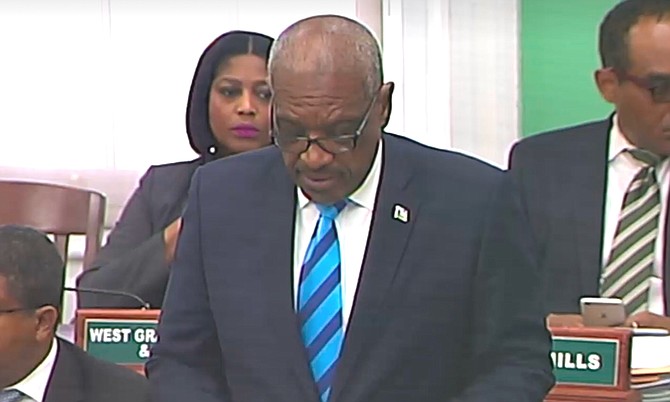 THE country “is at war” with the novel coronavirus, Prime Minister Dr Hubert Minnis announced on Wednesday as he revealed the confirmed cases of COVID-19 in the country have risen to three.

Announcing that Governor General C A Smith issued a proclamation of emergency on Tuesday, Dr Minnis pledged to do all in his power to protect the Bahamian people from the threat.

His comments came as he outlined sweeping measures under an emergency order and accompanying regulations tabled in Parliament on Wednesday. Dr Minnis also took a hard-line stance on the spread of “fake news,” which he said could foster violence, panic and a run on financial and health institutions during this crisis.

Under the new regulations, it would be a crime to publish or cause to be published in traditional media or social media, information that the person knows or suspects to be false.

Dr Minnis said the two latest infections were confirmed on Tuesday evening and were found through contact tracing of the first identified COVID-19 patient. He said household members of that first identified case had travelled to countries with known community spread of the virus, including Canada, Dubai and Trinidad.

“These household contacts have been quarantined and samples taken for testing,” he said. “Other contacts, including healthcare providers, are being investigated to determine their level of exposure and risk. A total of 30 contacts of the COVID-19 positive patient have been identified.”

Noting the unprecedented situation the country is in, Dr Minnis said: “The COVID-19 pandemic is a threat not seen in the lifetime of most people alive today. The world is at war with this virus.

“As prime minister, as a medical doctor, I will do everything in my power to protect the Bahamian people.”

He also said: “We are at war with this virus. As prime minister and as a medical doctor I will lead this fight with all of my strength and determination.”

Under the new regulations, a health officer can order that a person suspected of COVID-19 infection be detained or be isolated. The regulations also allow the prime minister to revoke or suspend all permits for the use of public open spaces in any particular area, or an entire island, or the country as a whole in the interest of public health safety.

The prime minister may also prohibit the assembly of two or more persons in a public place in any area specified in the interest of public health safety. The regulations, among other measures, also give the prime minister the power to institute a curfew.

Dr Minnis also hit out at “malicious misinformation” spread on social media which he said can cause mass panic.

“Such fake news may cause widespread panic that prevents citizens from following directions designed to protect their lives during a crisis. Under these regulations, no person shall publish or cause to be published, posted or re-posted over any media platform, inclusive of social media, any purported news or report or purported statement of fact, knowing or having reasonable cause to suspect the same is: untrue or false; or may incite public fear, panic or ethnic hatred,” he said.

Dr Minnis said the new measures will be painful for the whole country, but stressed the importance of such draconian policies.

“We have a country and a generation to save. It is going to be difficult but all things come to an end, and this crisis will also end,” he said.

• See Thursday’s Tribune for more on this story.

• You can read the Prime Minister's speech in full HERE

Thank goodness this isn’t the Christie led PLP handling this crisis. Could you imagine?

Frankly I can't imagine Christie would have done any worse than Minnis has done thus far in handling this life threatening crisis.

Why in a health crisis do we jave to go through Renward Wells and Jeff Lloyd before hearing from the Health minister. Isnt this odd?

trump holds daily press conferences. i want to know what is going on

Well what I learned today is, we will in short order see a widely circulated PR photo of the PM walking around Doctors hospital in a mask and a white coat. Wait for it. It een long now.

Yes he does but he lies in them.

The true colours of an emerging dictator!
First the House Speaker, ordered House MP's to stop asking questions about bad governing! Then they lied about Hurricane Dorian's dead bodies count!!
Colony's comrade dictator with the imprisonment mentality to prevent members from the PopoulacsOdinary from challenging the government's mishandling of the deadly coronoavirus. - same as he did when he called up the Royal Constabulary Chief to go brungs-in a foreigner seasonal resident ion Abaco for asking questions about rumours of alleged Hurricane Dorian corruption. Sounds pretty damn {sic} a step for a prime minister that has long lost his credibility to govern! I hope are prepared to imprison hundreds - if not thousands - from the PopoulacesOrdinary. Yeah, no?

Where are you getting that from I'm in the UK and heard nothing about that! The youngest to die here was 59 and he had motoneuron dease!

What an idiotic comment. There is NOTHING in the UK press or media about any such development. What is your motive for uttering such unsubstantiated nonsense?

No, this actually came up during the Trump/Pense/CDC public briefing session that was televised earlier today. Experts are investigating whether the virus has already mutated in a such a way that young and old are now vulnerable alike.

You are the dumb ass. Show me where I said UK a @ Honesman. Did me and mudda-Tal-doc agree on something? I retire my keyboard.

statnews.com was a site that mentioned it, but it is a news outlet that does not carry trustworthy information! No other credible news outlet has report " A new strain of the Corona virus is hitting millennials in Europe and making them gravely ill"

Breaking news: the PM is a doctor.

"Announcing that Governor General C A Smith issued a proclamation of emergency on Tuesday, Dr Minnis pledged to do all in his power to protect the Bahamian people from the threat."

When they had the power to actually do something they didn't (a sensible travel ban and closed borders), now all they can do is talk, curtail the movement of people and wait for the virus to burn itself out!

Too little too late and all while we have 2 doctors in government!

I say under the threat of imprisonment that just maybe the Governor has not a clue that what he just issued was a proclamation of emergency that can lead to the false imprisonment of any amongst the Colony's PopoulacesOrdinary - should they dare to question the OBAN HOAX - orchestrated up in the PMO,... and yes, there are actual pictures of evidence that it was all a HOAX Want see the evidence pictures. Call up any of the three Chief's Royal Constabulary, who took custody the pictures to aid in an investigation in search the now 2+ years missing OBAN documents. This government of clowns is [sic]! in head Let them scare you not into submission! Have the four MP PLP's, fallen asleep on the Queen's Service? Yeah, no?

Look here ASS, this is no time for your rabid nonsense, BEGONE!

actually it's not rabid nonsense.. those were some very broad powers listed in that order. In the hands of the wrong person we could have a North Korea situation.

You’re in no danger of being arrested for speaking out, as nobody can ever figure out what you’re trying to say. 🤣🤣🤣

‘ A top health official on the White House’s coronavirus task force warned Wednesday that younger people could suffer severe health risks from Covid-19, the disease caused by the virus.

Most public health messaging so far has stressed that people who are older, whose immune systems are weakened, and who have underlying diseases are at higher risk of becoming critical cases. But during a briefing, Deborah Birx, the official, cited preliminary data from Europe to caution the public that younger adults can get very sick ’

The United States is following the same new case curve as Italy, offset about 7 days, 2600 new cases today, and total infections crossing through 9000. Why are US carriers and random private jets landing here without any protocol whatsoever. There's no point plugging 4 out of 5 holes in a boat and thinking you've done something.

I am only here to read the comments for the entertainment value.. Thank you to the Almighty that we have so many well informed experts on this page. I wonder why none of them have a working job? All that talent going to waste...…..

Ironically, whilst the Colony's same Comrade PM and Messrs Security Minister and Attorney General crown ministers are engaged in Waging a War Against Criminals - that other British Colony of Bermuda, just recorded it's first murder since the year of 2018!

Will drive-thru testing be more effective with suspected cases rather than having patients enter health care facilities.

Yet you can still fly in un checked just sayin'

The virus doesn't have a passport...