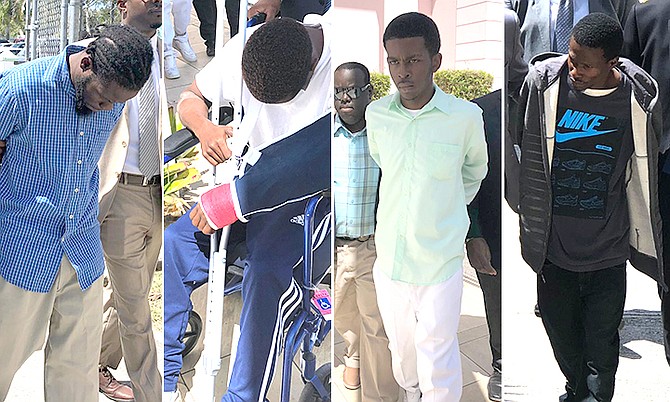 FOUR men were charged with murder yesterday in connection with three recent homicides in New Providence. One of the men was led to court in a wheelchair, his arm in a cast and sling, due to a previous injury that came after he fell off a roof, his lawyer said.

Yvenette Philips, 32, appeared before Chief Magistrate Joyann Ferguson-Pratt charged with murdering Cynthia Wilson on March 13. According to initial police reports, around midnight that day, two women were outside a residence on Carmichael Road east of Lazaretto Road when they were approached by three men, one whom was armed and opened fire on them, injuring one of the women.

Paramedics came and attempted to revive the woman but were unsuccessful.

Phillips was not required to enter a plea to the charge and the matter was adjourned to May 26 for service of a voluntary bill of indictment. Bail was denied and he was remanded to the Bahamas Department of Correctional Services (BDCS) in the interim. He has the right to apply to the Supreme Court for bail. Phillips is represented by attorney Donna Major.

During the arraignment, she asked the judge if her client would be allowed to take a small package with socks and t-shirts with him, since the correctional facility was on lockdown in light of COVID-19 fears.

During a recess, Magistrate Ferguson-Pratt spoke with Charles Murphy, the commissioner of corrections, who told her the BDCS was discontinuing visitation for 30 days due to the coronavirus pandemic.

She said that Mr Murphy asked the court to allow new inmates to bring clothing with them and granted Major’s request.

According to initial reports from police, shortly before 8am on March 8, officers were called to an unnamed road off Carmichael Road, just east of Lazaretto Road, after receiving reports that a male was shot. The male was pronounced dead at the scene.

Neither of the accused were required to enter a plea to the charge and the case was adjourned to May 28 for service of a voluntary bill of indictment. They were remanded into custody until that time. Jomo Campbell represented both defendants.

During the arraignment, he told the judge that Murphy had a pre-existing medical condition that made him prone to collapsing. When asked to elaborate, he revealed that Murphy’s arteries were assisted by stents.

Campbell also told the judge his second client, Jolissaint, had recently fallen off a roof at work and had fractured his skull, arms and legs.

Magistrate Ferguson-Pratt said she would send a note with both defendants so that they could be examined at the BDCS.

She also granted Campbell’s request for Murphy and Jolissaint to be allowed to bring clothing into prison with them.

In a third arraignment, 31-year-old Luckson Charite, of Sea Breeze Lane, was charged with murdering a woman outside a nightclub late last month. He is accused of killing Shantia McKenzie on February 29.

According to police reports, shortly after 1am that morning, a woman, standing outside a nightclub on Market Street and Palm Tree Avenue, was approached by a man who shot her multiple times before running away.

She was transported to a hospital where she was initially listed in critical condition.

However, the victim later died. No one else was injured during this incident.

Charite was not required to enter a plea and the matter was adjourned to May 28 for service of a voluntary bill of indictment (VBI.) Bail was denied and he too was remanded to the BDCS.