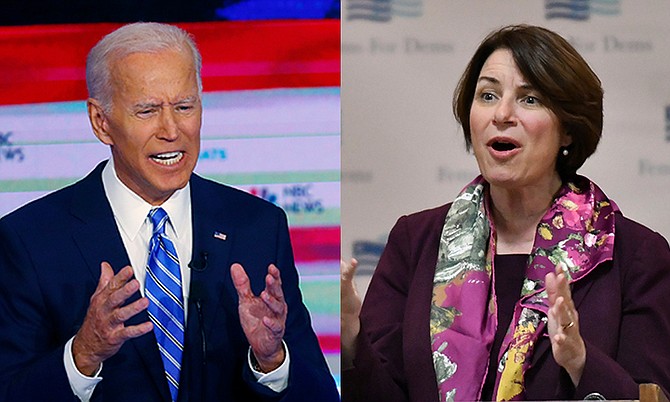 For a several weeks now the US has been floundering in its response to the coronavirus pandemic. Initially, the American administration, and especially President Donald Trump, downplayed the health danger of the virus. As a result the US found itself underprepared and potentially overwhelmed once the virus truly turned its attention to America.

The clumsy, incompetent US reaction to the coronavirus was led by Trump and his pathological fixation on the performance of the New York Stock Exchange and its (until recently) supportive effect on his re-election prospects. Trump has also revealed himself to legions of previously innocent souls that he cares mostly – perhaps only – about himself. Empathy is not in his tool box.

While Trump was fumbling and stumbling around in an attempt to take the onrushing virus threat seriously and reassure an increasingly anxious nation, the two remaining candidates to replace him squared off in CNN’s Washington studios in a debate without an audience but with a purpose.

On Sunday evening, Bernie Sanders took his last big swings at Joe Biden. It didn’t go well for the maverick Vermont Independent (he only caucuses with the Democrats in the Senate. He is not actually registered with either major political party).

Sanders tried - over two fairly interesting hours of one-on-one debate - to score points off Biden’s long legislative record in Washington. Biden kept returning to the present and near future, focusing on how he would handle the current health crisis and related financial distress.

While Sanders did not hoarsely hector as he has so often done in the past, it was Biden who looked and acted presidential. If Democratic voters in this week’s primary elections and beyond needed reassurance that the former vice president and Delaware senator was up to the task of being the US chief executive, Biden largely provided it.

Then on Tuesday, Biden waxed Sanders again, sweeping three important primaries in Illinois, Washington and Florida. The Democratic nominee is virtually certain to win the first two states in November, but Florida is highly questionable, and may well support Trump again.

Meanwhile, Ohio’s governor postponed his state primary on public health grounds. If the Democrats carry Ohio in November, they will be headed for a landslide victory.

In their debate, Biden reached out to Sanders and his followers a few times. He pointedly noted that he has adopted some of his party’s left-wing priorities. He said emphatically that if Sanders became the nominee, he could count on Biden’s enthusiastic and unambiguous support.

Sanders was a step slow and hesitant in reciprocating. This was also evident when the moderators inquired about the candidates’ readiness to add a female vice-presidential nominee to their ticket. Sanders mumbled in the affirmative, but it appeared insincere.

Biden, on the other hand, clearly said his VP choice would be a woman. (He also promised to name a black female to the US Supreme Court.) In remarks during the past week, Biden has pretty clearly telegraphed that his choice would be one of his erstwhile debate rivals.

Any presidential candidate wants a running mate who will provide a tactical and strategic benefit to the ticket. But only one woman who has shared this season’s debate stage really fills the bill. The Democrats will carry Massachusetts (Elizabeth Warren’s home state) and California (home to Kamala Harris), so adding either would bring limited returns. Among the major contestants, that leaves Minnesota senator Amy Klobuchar.

Lost in all the lamentations over the Hillary Clinton’s loss of Michigan and Wisconsin to Trump in 2016 is the fact that she nearly lost Minnesota to him as well. Trump has held rallies there this year, a good indication that he thinks his prospects in Minnesota are good for November. And we know that the president is a pretty good judge of such matters.

Enter Klobuchar who, as she often reminded voters on the presidential primary campaign trail, has never lost an election. She ran up big victory margins every time in Minnesota. This daughter of the Upper Midwest would also do well in Michigan, Wisconsin and perhaps even Ohio.

Also, the genial Biden, who clearly enjoyed a warm personal relationship with Barack Obama as his vice president and values getting along with people, will want a running mate with whom he is personally compatible. He has said as much publicly.

Klobuchar, with what seemed to be the best sense of humour in this year’s presidential primary field, may pass this interpersonal test with the highest marks.

We should see the lack of sport as an opportunity

You might spend quite a bit of time each week watching sports. Most of that time will typically be in front of the television. Some of it may be spent in the basketball gym, at the school track, at your kids’ soccer field or at another venue for live sports. But the chances are that most of your sports watching time is devoted to television.

In fact, the amount of time you spend watching sports that you do not actually participate in playing might just be a point of contention with whomever you live. “What a waste of time!” Have you ever heard that from someone you love?

You know who you are.

There’s an unprecedented sports recess in effect, courtesy of the coronavirus. In the US, the National Basketball Association, National Hockey League, Major League Baseball and major league soccer have all suspended their games schedules, with no definitive notion of when these might resume. The Masters golf championship has been postponed.

America’s great amateur sports spectacle, the NCAA mens college basketball championship, has been cancelled, as has the women’s tournament. The absence of March Madness will leave a huge hole in the viewing plans of many viewers. No office betting pools or water cooler arguments this year either.

The National Football League has reacted cautiously, but this week American pro football gave us all quite a bit to talk and think about. How about the Greatest Quarterback of All Time leaving the New England Patriots after 20 years to join the perennially downtrodden Tampa Bay Buccaneers? Joining Tom Brady in moving on after a long tenure is former San Diego (now Los Angeles) Chargers QB Philip Rivers, who transfers to the Indianapolis Colts.

Locally, the Miami Dolphins were active in the free agency market, adding several defensive studs with proven records of success and high performance. Armed with this infusion of strength and an armful of high choices in next month’s NFL draft, the Dolphins are likely to be among those teams for whom prognosticators forecast unexpected success in 2020.

The April 23-25 draft, scheduled for Las Vegas, has not yet been postponed. There is talk that, instead of an event like the one attended last year by an estimated 600,000 fans in person in Nashville and viewed by 47.5 million more on television, this year’s draft extravaganza may be held in the NFL network studios in Los Angeles before no audience.

In Europe, the five major soccer leagues have similarly suspended their schedules. The sport’s greatest club championship, the European Champions League, has also temporarily halted competition. There is much speculation as to how the leagues and UEFA will sort it all out. That’s interesting, but no substitute for actual games.

The seemingly infinite proliferation of sports networks on cable television is seriously challenged to find programming to substitute for live contests that rivet viewers. Reruns of “classic” games are rapidly becoming the norm on sports cable.

Some serious publications are actually issuing lists of some of the greatest sports movies, as if that would be a satisfactory substitute for the emotional roller coaster of rooting for your favourite team.

So now all sports fans are faced with a serious drought. How will we all respond? It might help to regard this found time as an opportunity instead of a hardship. Yeah. But it will still feel like a hardship.

Joe Biden is being pressed by the likes of Barrack Obama and Bill Clinton to select none other than Hilliary Clinton as his running mate.

ANYONE BUT TRUMP. That is the mission....

LMAO. The only man disliked by Bahamians right now more than Trump is Minnis.

Tips evaluating stateside just ticket bidden and klobuchar. Here are some causes listed which states tips for making our analysis easy. It is a great source to read from such causes of popularity. You have done a great job.